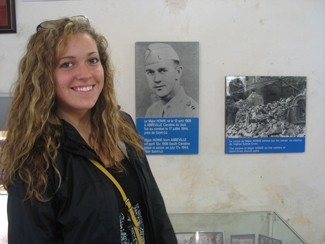 Mary Shinholser with a picture of her great-grandfather, Thomas Howie.

More than a month after helping to lead the 116th Infantry ashore at Omaha Beach during the third wave of the Normandy Invasion in June 1944, Maj. Thomas Howie was leading his unit into the town of St. Lo, battling constant artillery fire from German soldiers.

"See you in St. Lo" are the words Howie reportedly radioed back to 29th Division Commander Gen. Charles Gerhardt just before ordering his unit to advance on the town through intense gunfire. Moments later, a mortar barrage struck nearby, and Howie was fatally wounded by shrapnel.

Months earlier, Howie had written to his daughter, Sally, back home. It read in part:

"I was placed in command of some 850-odd officers and men, a war-strengthening battalion, with all its weapons, vehicles and equipment; and the responsibility of some day committing them to battle perhaps from which a number may not return is a fearful thought. If that day should ever arrive, I hope I shall be as proud of them as I've always been of you."

Sixty-eight years later, Mary Shinholser, a Radford University junior history major from Mechanicsville, read that letter for the second time in her life—she first read it at age 13—while standing in a St. Lo chapel converted into a shrine commemorating her great-grandfather and the other troops who fought for the liberation of the town.

"It made me emotional now that I am older and more mature and can wrap my mind around everything he must have been going through at that time," said Shinholser, recalling her moment in St. Lo. "Although I did not cry when I read it, it did make me emotional on the inside." 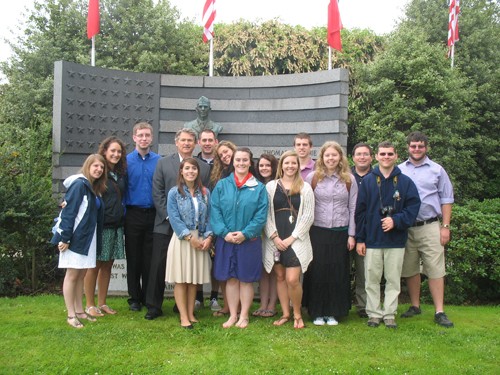 Shinholser was in St. Lo, a sister city to Roanoke, with RU Professor Richard Straw and a group of 14 students on a study abroad trip that took them to strategic locations in England, France and Belgium. The purpose of the three-week educational journey was to "give the students an overall understanding of the dynamics of World War II and a real, intense focus of the D-Day invasion and the eventual liberation of France," Straw said.

Straw didn't originally plan a trip to St. Lo but added it to the itinerary when he learned through Shinholser's grandmother, Sally Howie Jebson, about his student's relation to history.

Shinholser, who describes herself as "one of the biggest history buffs you'll ever meet," signed up for the trip as an opportunity to visit the historic sites of the two world wars. Knowing the story of her great-grandfather, she specifically wanted to visit Omaha Beach.

"We took the ferry to Caen, and on both sides you could see Omaha Beach and Utah Beach," Shinholser said. "It was like we were taking the path they took during D-Day."

The Radford group arrived in France after five days in England, where they visited museums and sites to learn about World War II from a British perspective. In Normandy, the group visited more sites and museums dedicated to the American and British efforts to liberate France from the Nazis. "Americans have the idea that the French don't like us," said Straw, who noted numerous gardens in the area displaying French and American flags. "But that's definitely not true in Normandy and St. Lo. They are very thankful."

Shinholser quickly learned the extent of just how thankful the French were, specifically to her great-grandfather Maj. Howie, who may have been the model for Tom Hanks' character in the film "Saving Private Ryan."

The group's first stop in St. Lo was to visit the museum dedicated to Howie and his troops. There they viewed artifacts from the World War II battles, and Shinholser, as well as others from the group, read Howie's letter. "It was pretty moving to read that letter," Straw said.

Another significant military artifact the group saw at the museum was a famous photograph from the battle that appeared in Life magazine showing Howie's body, draped with an American flag, lying on rubble of a church just after the major's troops had captured St. Lo. The major's troops made certain he made it to the town.

Andy Rooney, the late "60 Minutes" commentator, witnessed the event as a young reporter for the military newspaper Stars and Stripes. In his memoir, "My War," Rooney wrote: "I hurried over and saw 10 or 15 soldiers lifting (Howie's) flag-draped body laid out on a wooden door up the heap of stone and mortar that been the side of the church. … The soldiers were placing the body at the very top of the heap."

Following the emotional museum experience, the RU group journeyed into town, where they were met by a large crowd including TV and newspaper reporters, who spoke with Shinholser and observed while she and St. Lo's mayor placed a wreath on a large monument dedicated to Howie.

From there, the group went to city hall for a formal presentation. Some of the townspeople who attended were children when Howie's troops liberated St. Lo. The town's mayor presented Shinholser with a D-Day 50th anniversary commemorative medallion.

"They made me feel like a celebrity," said Shinholser, who expressed gratitude to Professor Straw for the experience. "I didn't expect Dr. Straw to go out of his way the way he did and arrange to have the extra day in St. Lo. I didn't expect that at all, but I'm glad he did it."

"The tour arranged by Radford and Dr. Straw was invaluable to Mary and, in turn, to me," Howie Jebson said. "It has strengthened her interest in her great-grandfather’s life as well as history in general. I know it will continue to keep his memory alive both in her life and in that of our family."

For Straw, who has taken students from Radford University on study abroad trips 11 times since 1995, the experience and attention his group received in St. Lo was overwhelming.

"Maj. Howie is revered in St. Lo, and it was really special to see how well they treated Mary. I was constantly amazed at the attention," Straw said. "What struck me the most about the whole visit to Normandy—the beaches, the museums and especially the visit to St. Lo—was how much the memory of Howie and the liberation from the Germans is a part of their memory."