Alum Is No Cowardly Lion - Except in the Movies 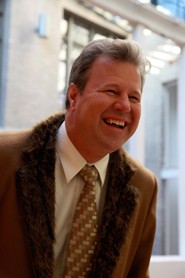 In the new film "Dorothy and the Witches of Oz," Radford University alumnus and Glade Hill native Barry J. Ratcliffe '85 portrays Bryan, the Cowardly Lion. It seems, however, the Cowardly Lion is not so cowardly in this movie.

Ratcliffe puts the best of himself into the role made famous by Bert Lahr. Ratcliffe says his character is "crazy, funny, goofy, wild, strong and, hopefully in the end, lovable."

Besides being an actor, Ratcliffe is president of Bear Entertainment and a comedian, motivational speaker, TV and film producer. Since his major break 18 years ago when he joined Don Johnson in the cast of the late 1990s TV series “Nash Bridges,” Ratcliffe has worked full time in the entertainment industry.

"Dorothy and The Witches of Oz,” directed by Leigh Scott, follows the exploits of the grown Dorothy Gale, now a successful children's book author. As she moves from Kansas to present-day New York City, Dorothy quickly learns that her popular books are based on repressed childhood memories and that the wonders of Oz "are very, very real," according to the movie's synopsis. "When the Wicked Witch of the West shows up in Times Square, Dorothy must find the inner courage to stop her."

In his RU years as a theatre and journalism major, Ratcliffe was president of Student Life and a lifeguard at the Peters Hall pool. To say that he enjoyed his time at Radford is an understatement. Everything he needed to know he learned at Radford, he said, and being from a small town helped. "I can hold my own in just about everything, including tractor pulls,” he said. “Everything I have learned has come full circle. I learned from the best."

He is naturally exuberant and jovial. "I've never had a cup of coffee in my life. I'm afraid my head would blow off," he said. This is ironic considering he is currently appearing in “The Wish List,” a Hallmark original movie starring Jennifer Esposito, portraying the host of a coffee competition. The movie will air at 10 p.m. on April 21.

He played roles in “Untold Stories of the E.R.,” “America's Most Wanted,” “Nip/Tuck” and “The Plot to Kill Nixon.” He also has appeared in the reality series “Transamerican Love Story” and the music video "Every Day" with Rascal Flatts. He will appear in an upcoming film in the Penny Dreadful series.

Chuck Hayes, professor emeritus of theatre and cinema at Radford, said, “Barry always had a firm focus and knew what he wanted to do. Now, he has become what every actor says they want to be: a working actor. Too many people do not realize how difficult this is to accomplish. He has a good career going in one tough city."

Hayes said he admires what Ratcliffe is doing. “It’s nice that he always acknowledges his Radford roots. Plus, he’s a nice guy.”

Wrestler Snow was happy to share his opinion of Ratcliffe, whom he describes as his best friend. "He is honorable, honest, and he puts other people first," Snow said. "He goes out of his way to help others, and that's just not actors." Snow said he and Ratcliffe connected and became friends the first time they met. "I have respect for him."

Ratcliffe looks for the humor in every circumstance, including the fact that sometimes his friend steals the spotlight. Such was the case at a recent autograph signing with Snow. "I was sitting there signing autographs and looked up and all of a sudden there wasn't anybody in my line. There was a long line at Al's table. After all, he is a wrestler," Ratcliffe quipped.

Ask Ratcliffe what his favorite role was, and he will tell you, "I've loved everything I've done. Whatever project I am working on that time is my favorite."

He encourages RU theatre majors to treasure their college experiences. "Let your life take over," he said. “Hang around people. Study people. Pick up on gestures of doctors, cops and everybody."

To see trailers for "Dorothy and the Witches of Oz," visit the official website.