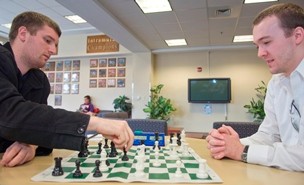 James Hunt (left) and Benjamin Brumfield play a round of chess in the Bonnie.

Radford University seniors Benjamin Brumfield and James Hunt put their chess skills to the test at Princeton University as they competed in the 2012 Princeton Collegiate Open.

Hosted by the Princeton University Chess Club Feb. 4 and 5, the second annual tournament was a six-round intercollegiate event rated by the U.S. Chess Federation (USCF) and open to all college undergraduate and graduate students across the nation. Plaques and awards for the New Jersey-based tournament went to the top three teams overall.

Brumfield won two of his four matches, and teammate Hunt won one. Though neither took home cash or prizes, both said they were thrilled to compete in their first national tournament.

"I absolutely loved it, but it was exhausting!" Brumfield said. "Four two-hour games in one day was really draining but incredibly fun. I am definitely going to more competitions like this."

The Princeton tournament was the first for either RU student in a USCF-rated competition.

Both said they had no expectations going into the tournament and were just excited to be competing with top collegiate players.

"This will be my first chess tournament," Hunt said before his trip to Princeton. "Regardless of the outcome, it is sure to be a great experience. It is also pretty cool that Ben and I will be representing Radford."

Brumfield and Hunt are both active in the RU Chess Club, formed to give students and nonstudents the chance to play, learn and teach the game. Club membership is open to anyone interested in and passionate about the game. Only full-time RU students of good academic standing may serve as officers on the club's executive board, while a current full-time or adjunct RU faculty or staff member serves as club advisor.

Juergen Gerlach, the chess club's faculty advisor for the past three years and a professor of mathematics and statistics, said he is proud of both players.

"I hope that this event will add a spark to the club, give us more publicity at RU and draw new members," Gerlach said.