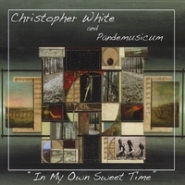 Pandemusicum released "In My Own Sweet Time" in December on the ARC label.

Jazz ensemble Pandemusicum is set to take the stage Monday, March 21, at Radford University to perform original works from its latest CD "In My Own Sweet Time."

The concert begins at 8 p.m. in the university’s Covington Center for Visual and Performing Arts, and is free and open to the public.

Led by Radford University Music Professor Christopher White, Pandemusicum is made up of a group of RU professors and students. All members are brothers in Phi Mu Alpha Sinfonia fraternity.

“It is always a pleasure to perform in front of the home crowd,” said White, a recording artist for the Artists Recording Collective (ARC) label. “It is great for them to see the faculty in action, and the inclusion of students in the ensemble makes it especially exciting.”

Playing modern creative jazz mixed with traditional "little big band," Pandemusicum released "In My Own Sweet Time" in December on the ARC label. The CD is available at major retailers, including iTunes, Amazon and CD Baby.

White, who lists saxophones, flute, composer and arranger on his comprehensive music resume, is the director of jazz studies and an assistant professor of saxophone at Radford University.

An eclectic musician, the professor studied conducting, saxophone and composition while performing in the studios and club scenes of Los Angeles. His education and teaching career have led him across the United States, with stops in California, Kansas, Baton Rouge, Boston, Montana, Maine, and finally to his home in Virginia.

White has instructed every level of music from pre-school to doctoral students and has performed with such diverse musicians as the Stan Kenton Orchestra, Ringling Brothers Circus, Whitney Houston, Ben E. King, Richie Cole as well as the Baton Rouge and Billings Symphonies and Los Angeles Philharmonic Institute.

Hamilton, Rakes and Johnson are Radford University students. Quakenbush is director of bands at Cave Springs High School in Roanoke.