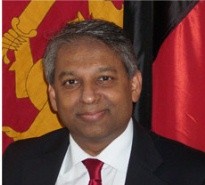 At the royal palace in The Hague, a Radford University alumnus presented his credentials to Queen Beatrix and took over June 29 as Sri Lanka’s ambassador to the Netherlands.

“It was a very traditional, very formal experience,” said Buddhi Athauda ’93, MBA ’98. “We rode in a carriage flanked by guards to the Noordeinde Royal Palace, where the band played our national anthem and I was presented for a discussion with the queen."

As ambassador, Athauda has a “24/7” job as official representative of Sri Lanka and his compatriots to institutions in The Hague. He promotes Sri Lanka’s culture, trade and bilateral relations with Netherlands and its people, and represents his country at The Hague’s several international justice organizations and to its United Nations delegation. Among his duties, he serves as a permanent representative to the Organization for the Prohibition of Chemical Weapons (OPCW), which represents about 98 percent of the global population and an equal portion of the worldwide chemical industry.

Athauda’s diplomatic career followed a business career that began in 1996, when he was one of the first employees of a startup company, Iridium, that went on to revolutionize international telecommunications with the first mobile satellite telephone.

“Those were the boom days,” he said. “We raised $7.5 billion and put Iridium’s first satellite in the sky. We were also one of the pioneering multinational companies to open the Indian market.”

In 2007, Athauda entered the Sri Lankan diplomatic corps as part of the country’s delegation to Germany. He served as consul general in Frankfurt, where he represented and promoted Sri Lankan interests in the six surrounding German states.

Reflecting on his time at Radford University, Athauda is quick to acknowledge its characteristic combination of academics and personal attention. “RU really helped me. My professors were true teachers with a passion for teaching who took an interest in me and went out of their way to stretch a kid and his talents.”

Citing the value of social skills to both his business and diplomatic careers, Athauda said the university was a safe platform to develop his skills in that critical area.