Designed as an overview of the field of tourism – Virginia’s third-largest industry – the class included lectures, labs and field trips, wrapping up its Summer III session on June 16. The class saw the Caribbean from Carnival Cruise Lines’ ship “Fantasy” and toured the Atlantis Resort on Paradise Island, Bahamas. Locally, they toured destinations including the D-Day Memorial in Bedford, Radford landmark La Riviere and the Fort Chiswell Animal Park to meet with tourism and hospitality industry professionals and gain practical experience in tourism marketing, customer service and logistics.

“The class was designed to be education by participation, and these students made the most of their experiences,” said O’Bannon, who modeled the class after RU’s long-running Wilderness Institute. 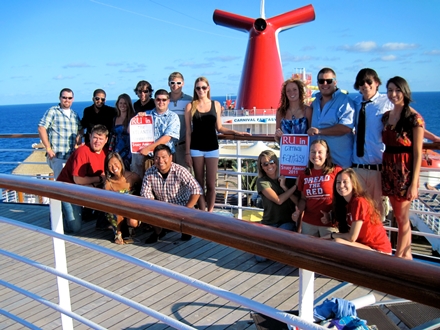 Members of the Radford University Summer Tourism Institute gather on the deck of the Carnival Cruise Lines ship "Fantasy."

A key component of the Tourism Institute was the requirement that each class member organize and lead a tour of his or her own. Each tour was evaluated by other members of the class. For additional hands-on experience with special events, the class volunteered as traffic managers on May 21 for the NRV Chili Festival’s Hilly Chili 5K to support the American Red Cross’ New River Valley Tornado Relief Fund.

“We were actually out there doing things, so the class was more like a job,” said Alexia Springer, a recreation, parks and tourism major from Richmond, Ind. She estimated that she and her classmates traveled more than 1,000 miles during the monthlong class. “It was an incredible opportunity.”

The students met people from around the world during their trip – more than 60 nationalities were represented on the cruise alone, according to the class’ count. Among the most memorable of their encounters, though, was stateside when a retired U.S. Army general joined their tour at the D-Day Memorial and shared his experiences as a paratrooper during the invasion of Normandy.

“It was incredible to learn about the planning that is involved in their operation – the food, the activities, the service and the housekeeping. There is someone cleaning something all the time,” said Patrick McCombs, a senior from Sterling, who was also struck by each of the Carnival staff’s uncanny ability to know everybody’s name all the time.

The session began with a “volun-tourism” experience at a farm outside Floyd, where the students loaded hay, gardened and managed livestock. It ended with presentations of proposals the students developed for a campus tour for RU Sustainability that featured sites highlighting conservation, recycling and energy management initiatives.

“We were involved in so many different avenues of tourism that I feel confident it has a place for everybody,” said Roberto Varela of Halifax.