With hundreds of students and hometown fans on hand despite threatening skies and storm warnings, Radford University officially opened its remodeled baseball stadium April 8 for the Highlanders’ first night game at home.

In the parking lot adjacent to the stadium, the crowd milled around vendors selling barbecue, peanuts and Cracker Jack, and shopped at a tent offering merchandise from the RU Bookstore. The aroma of the barbecue wafted across the lot as cheerleaders passed out red terrycloth “rally rags” to fans as they approached the stadium for the opening ceremony and the Highlanders’ game against the VMI Keydets, first in a three-game homestand. 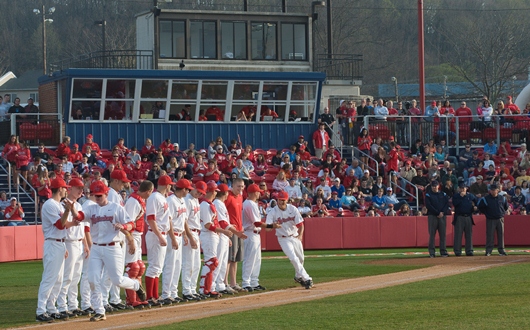 Inside the stadium, Athletic Director Robert Lineburg opened the ceremony by welcoming spectators, acknowledging major players in the upgrade project and introducing RU President Penelope W. Kyle, who greeted the crowd and recognized Lineburg and Baseball Coach Joe Raccuia for their leadership for such a “momentous and historic occasion.”

The president recounted a conversation four years ago in which she challenged Raccuia to find the resources to build the stadium he wanted for his program. She then explained the subsequent upgrades, including the eight tournament-quality light standards that made the night game possible, were funded entirely from private donations.

She thanked everyone involved in the fundraising and gave special recognition to alumnus Mike Hurt, who played Highlander baseball with Raccuia in the early 1990s and was instrumental in the stadium project. “Mike stepped in to give us the vision for this project, he led us to where we are, and he brought this project to fruition,” Kyle said.

Raccuia in turn thanked Lineburg, Kyle, Hurt and others, and he encouraged the fans to keep supporting Highlander baseball, which with the stadium improvements is well positioned to be a contender in Division I baseball.

Kelly Underwood, director of athletic advancement, acknowledged Hurt as one of the “unsung heroes” of the project, along with Georgia Anne Snyder-Falkinham, president of the Radford University Foundation, and Jack Murphy, project manager for engineering firm Thompson & Litton Inc.

Scott Gines, RU baseball coach from 1988 to 1994, was also introduced and recognized for his contributions to the program.

After the opening festivities, ceremonial first pitches were thrown in unison by Kyle, Lineburg, Raccuia, Hurt and Abie Williams, representing the community of Radford and RU baseball parents. As the game began, Hurt found a seat in the home team’s dugout.

The university’s baseball facility was built in 1986. The upgrades include the bluegrass playing field, installed in Fall 2009 and featuring underground irrigation and drainage systems. The stadium area now features 700 red chair-back seats that stretch from dugout to dugout, a new press box and sound system. New dugouts, each 74 feet long and with rest rooms and storage facilities, were also built.

The first game was called after just a couple innings because of thunderstorms and will be rescheduled. Fans’ and players’ spirits remained undampened.

"This is an amazing facility and it’s going to help create a very promising future for Highlander baseball," said Athletic Director Robert Lineburg. "But the real story here is how everyone worked together, from the university administration to our alumni friends and partners, to make this dream come true."

For more photos from the opening of the newly renovated baseball stadium, please visit our Facebook Gallery.