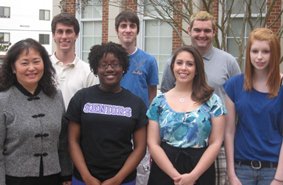 Eight Radford University students with GPA’s of 3.0 or higher have been named Kirk Scholars and will begin preparations culminating in a scholarship-related trip to China during the summer of 2013.

“We are proud to welcome these impressive students to the program which not only takes RU students deep into the language and issues of the Chinese culture, but also provides future opportunities within their own interest of studies in the global market,” said Dr. I Ping Fu, assistant professor of foreign language and literature.

The Zylphia Shu-En Kirk Endowment was established in 1999 by RU graduate and former Rector of the Board of Visitors R.J. Kirk. The program, named in honor of Kirk’s daughter, will enable the eight students to experience the Chinese culture firsthand after completing four semesters of Mandarin Chinese in the classroom.

“The Kirk scholarship is a unique opportunity to achieve some life-long goals of mine and experience life outside the United States,” said Dodson, a freshman in the physics and engineering 3:2 double major program at Radford and Virginia Tech. “It's just an honor to be named a Kirk Scholar candidate, and I'm very excited about this opportunity to experience a country with such a rich cultural and historical past, present and future.”

As a part of their participation in the program, Kirk Scholars also assist Fu as leaders in helping organize Chinese cultural activities on campus such as the Harvest Moon Festival and Chinese New Year.