Held in collaboration with the Radford City Police Department as part of Radford University’s annual Homecoming celebration, the event attracted an estimated 225 participants, many dressed in colorful, zany costumes, and raised about $17,000 for Special Olympics of the New River Valley. 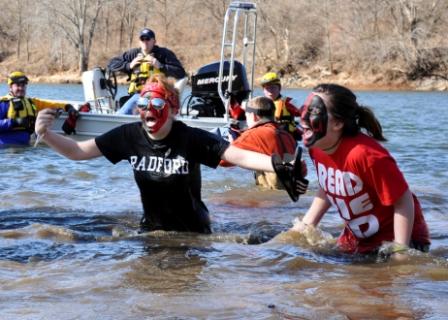 Students Faith Cromer (L) and Ginger Olsen (R) react to the cold temperature of the water during the second annual Highlander Polar Plunge.

“It was a lot of fun,” said Frank Fitzgerald ‘81, who along with his team from Virginia Tech’s Office of the Vice President for Research, has participated in Radford’s plunge both years.

“It’s just an adrenaline rush,” he added. “Hitting the water wasn’t as bad as we thought going in, and actually we went pretty far out, and several of us even went under [the water]. But once you get out, it’s pretty darn cold.”

“It’s really spread like wildfire,” said Nancy Morehouse, director of the Special Olympics’ Virginia, Southwest Region. “Just having the community coming out in full support of us just left a really good feeling, so the people who came out last year really engaged even more people to participate in it this year.”

More than half of Fitzgerald’s team was comprised of Radford University alumni. 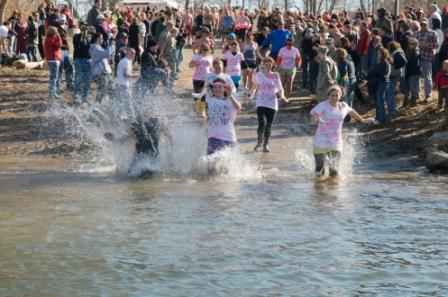 “It really created some great camaraderie in our group, and of course it’s always such a good thing to raise some money for the Special Olympics,” said Fitzgerald, whose team raised over $1,000 for the cause, surpassing their total from last year by a few hundred dollars.

“It shows the strong community support,” he said. “Such a fun time, a great cause, and everyone can get behind it to support you.”

Sporting their Highlander pride courtesy of red chest paint and superhero shorts, current RU students Matt Meyerson, Alex Becouvarakis, and Justin Oresik were more than ready to dive in for a great cause.

While this is only the second year of the polar plunge, Special Olympics has been an active partner with Radford University since the 1980s, according to Morehouse.

“The students at Radford have been involved in lots of different ways, with a lot of the students also participating in our Unified Leagues throughout the year, where people with and without disabilities participate [in various sporting events] as equal members,” said Morehouse, applauding the efforts of the university’s volunteers for the various Special Olympic programs.

“That’s a very positive thing that the students of Radford are doing,” she said. “Hopefully it’s something that will just build every year.”

Prizes were awarded for the top fundraisers and for the plungers wearing the most outrageous attire, with the first 150 registered participants receiving “Highlander Polar Plunge” commemorative t-shirts.