Located in the foothills of Virginia, Radford University is a comprehensive public university. 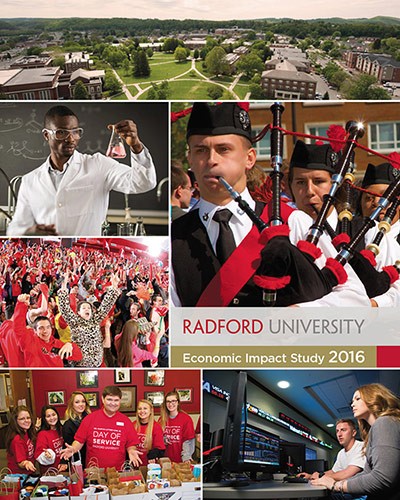 As a comprehensive institution of higher education within the Commonwealth of Virginia, Radford University is focused on fulfilling its primary mission of teaching, research and service. In servicing this mission, the University has had a profound impact  on the surrounding communities as well as across Virginia.

For each dollar of state support, the impacts represent a return on investment of $22 statewide and $10 regionally, based on an investment of $47.3 million received in general appropriations.

This economic impact study further details the valuable contributions the University makes to the regional and statewide economies. Serving the Commonwealth of Virginia has been fundamental to the University’s success, educating one of the highest concentration of in-state students relative  to its size. For example, 93.2 percent of undergraduate students were in-state residents  in academic year 2015-16.

Radford University takes great pride in the community in which it operates and values every stakeholder: students, alumni, faculty, staff and visitors alike. This community focus continues to expand beyond campus boundaries, inclusive of each stakeholder who shares in the Radford University experience. The impact of these relationships reflects a cohesive system yielding both financial and nonfinancial benefits.

As previously indicated, Radford University provides a significant benefit to both the regional and state economies. The University has been named to the
“Best Colleges and Universities in the Southeast” list, according to the Princeton Review, for the past 14 years. With the University’s commitment to providing a well-rounded educational experience, the University is well positioned to remain a major economic driver.