1. A Passion for Higher Education

For Radford University, this fall meant the beginning of a new era of leadership under Dr. Brian O. Hemphill.

President Hemphill meets alumni across the Commonwealth and beyond.

A campuswide service project resulted in the collection of more than 14,000 nonperishable food items.

Hemphill was ceremonially installed as Radford University President by Christopher J. Wade, rector of the Board of Visitors, who bestowed the presidential medallion, and Interim Provost Joseph J. Scartelli, who conveyed to him the academic mace.

“The enormity of the trust you have instilled in me is my constant companion. It is present in every action and every decision that I have made and will make on behalf of the University,” said President Hemphill in his remarks, titled ”Embracing the Tradition, Envisioning the Future.”

Of his goals, President Hemphill said, “We must engage the Radford family in its totality in planning and executing a bold and innovative agenda, which positions us for the future.”

President Hemphill reiterated his commitment to the fundamental principles of excellence, transparency, accountability and student-centeredness. He also reminded the Radford family of the areas upon which he will focus: brand identity, academic excellence and research, student success, strategic enrollment growth, economic development and community partnerships and philanthropic giving and alumni engagement.

According to the president, Radford University will fulfill its role as a result of four steps. The first step will be to “continue the journey of being student-centered.” Step two is to engage faculty as “active partners in the governance of this great institution.” Hemphill said the third step is to “become a data-driven university with clear measures of success and accountability at our core.”

“Finally, we must adjust to the speed at which society is moving,” Hemphill said. “For this to occur, we must focus on innovation and being responsive to societal needs.”

Hemphill also shared a historical perspective, saying, “Today is a day to reflect on and celebrate the rich academic traditions and proud history of Radford University.”

Among the challenges facing Radford University, and other universities, that Hemphill identified was the need to move away from “the industrial model” toward one that is “nimble and committed to working with all students, regardless of academic profile.”

Hemphill challenged the Radford family to “move beyond our single focus and look for new opportunities and niche markets.”

Hemphill talked of how Radford University can be distinctive.

“We should not try to be like any other institution in the Commonwealth,” Hemphill said. “With students at the very heart of every decision, we will serve the Commonwealth as a model for innovation and creativity.” 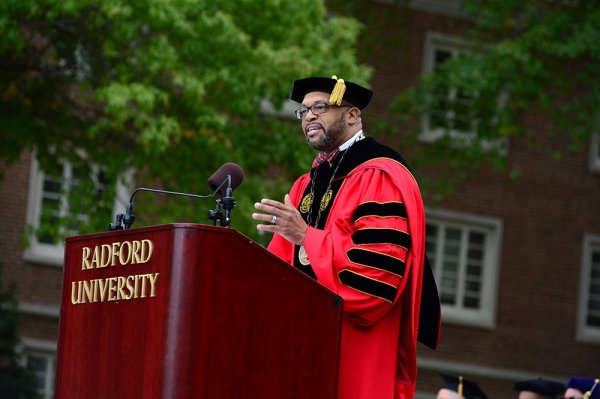 Gee described the leadership role of university president as “engaging the whole campus in answering the question ‘What are we doing here?’”

Gee added: “The reason we are here is the idea that we will make the world a better place with the products of the mind.”

Among the many dignitaries in attendance at the ceremony were Virginia Secretary of Education Dietra Y. Trent and Peter A. Blake, director of the State Council of Higher Education for Virginia.

“President Hemphill’s leadership will continue Radford’s tradition of academic excellence and position us to face the challenges ahead,” said Turner.

Almost 40 delegates from across the Commonwealth of Virginia and the United States assembled on the platform to witness the investiture ceremony. Colleagues from 20 of Virginia’s public, private and community colleges were on hand, and colleges from West Virginia, Iowa, Arkansas, Illinois, Georgia and North Carolina were represented.

“As a colleague in higher education and an alumnus, I am honored to be here as Radford moves its tradition of serving students forward,” Osborne said.

The delegates were joined by almost 100 faculty members who donned academic regalia to march in the processional that opened the event. At the head of the procession was senior faculty member and mace bearer Jonathan Tso, geology professor and department chair.

“Since 1977, Radford has been my home and I love it,” he said. “Today’s ceremony marks a renewal of the University as well as the change in leadership.”

Donna Boyd, professor of anthropology and director of the Radford University Forensic Science Institute, said, “Radford has an opportunity to move confidently forward toward greatness with a new president, new buildings and the collegial spirit we see today.”

Felicia Freeman, a graduate student pursuing a master’s degree in special education, shared the optimism of the day.

“This was a fabulous event,” Freeman said. “I already feel a stronger connection to the University. I’m motivated and inspired to do great things here. I’m very proud to be a Highlander, and I know I made the right decision to continue my education at Radford University.”

Hemphill reflected on his 21 years in higher education and acknowledged several mentors and friends in attendance who had helped prepare him for taking the helm of Radford, its seven colleges and 9,400 graduate and undergraduate students.

“I thank you all for all of your support, the sink-orswim opportunities and the occasional swift kick,” he said. “I also thank each of you for teaching me about accountability, expectations and true leadership.”

-back to Up Front section-

A Passion for Higher Education 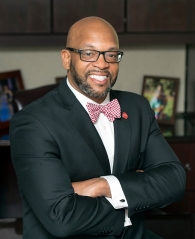