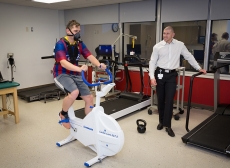 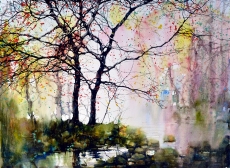 At the fifth annual Give Your Heart to art event, supporters received a sneak peek at "Art of Feng No. 3." 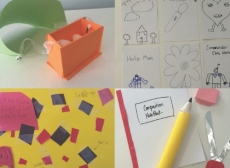 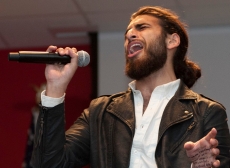 The 25th annual International Banquet was held on April 16. 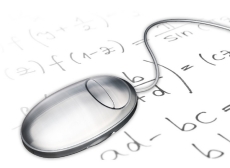 Professional Development for the Practical 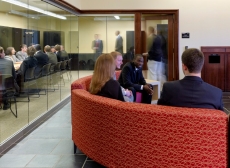 The Business of Opportunity

The College of Business and Economics (COBE) has introduced the new COBE Fellows program. 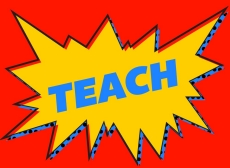 Not Asking for "Super Hero" Status 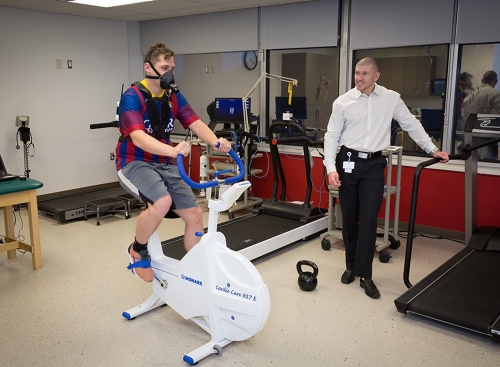 Delegate Joseph P. Yost ’06, M.S. ’08 joined the celebration that featured presentations and demonstrations by D.P.T. students. Founding D.P.T. Chair Ed Swanson and retiring Professor of Communication Sciences and Disorders Raymond Linville were singled out for their pioneering contributions, as was Heywood Fralin, chairman of Medical Facilities of America (MFA), a key early proponent of the program. Fralin and MFA made a substantial first financial contribution along with vital D.P.T. corporate partners — Carilion Clinic, Genesis Rehab Services and Friendship Retirement Communities — to launch Radford’s effort to address the region’s need for physical therapists.

The program, located on the eighth floor of the Carilion Roanoke Community Hospital in Roanoke, graduated its first cohort in May 2014 and is chaired by Associate Professor of Physical Therapy Kristen Jagger. 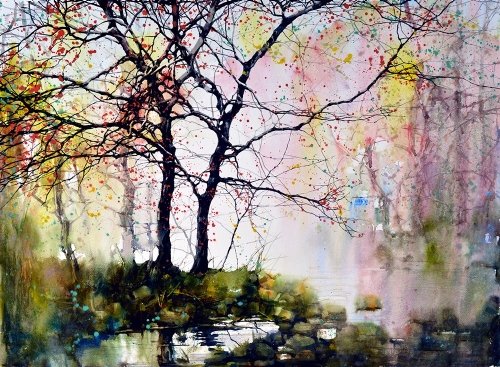 At the fifth annual Give Your Heart to Art event, supporters gathered to celebrate artistic life on campus.

In addition to fine dining and even finer company, art lovers received a sneak peak at “Art of Feng No. 3,” an exhibition in the Radford University Art Museum, before it opened for the spring.

In the exhibition, internationally renowned artist and Radford University Professor of Art Z. L. Feng showcased watercolor, pastel and oil landscapes and portraits he created during a 2015 fall sabbatical in China and other places.

“I am so honored,” Feng said, before announcing that he would give something back: Half the proceeds from art sold during the exhibition were donated to the Z.L. Feng International Scholarship Endowment in Art.

The 2015 recipient of that scholarship, Keturie Hehn, joined Feng at the event to thank him for his tutelage and scholarship support. 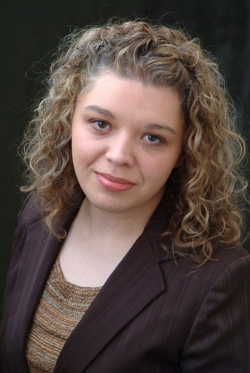 The newest terminal degree in the College of Visual and Performing Arts, this entirely online program provides students with in-depth experiences using the design process to solve complex international problems and issues through teamwork.

Murdock, who lives in Utah, started in fall 2013, after finding the program through an online search. After graduating with a bachelor’s degree in interior design from Utah State University, she wanted a graduate degree from another part of the country without having to move.

“When I found Radford, I knew it was the right program and the right school for me,” she said.

“To do that, I developed a series of workshops to bring together people from different backgrounds, from interior designers and architects, to people who work with relocated refugees and even a former refugee from the Congo,” Murdock said.

Together they brainstormed, prototyped ideas and developed an ongoing coloring book exchange between U.S. children and refugee children.

Murdock plans to teach in a university interior design program and bring design thinking into its curriculum. 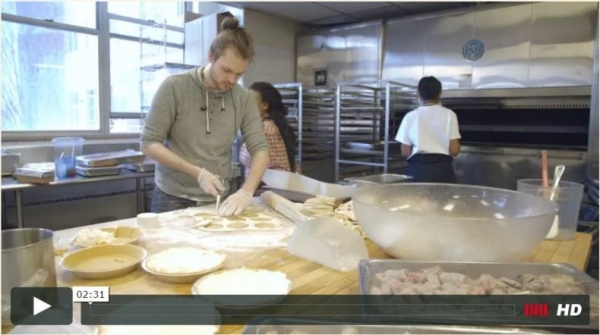 Hundreds of students and alumni enjoyed an evening of colorful performances and an enormous spread of food representative of dozens of different countries and cultures.

The elaborate event is coordinated each year by the International Student Affairs Council (ISAC). The group formed in the early 1990s to promote diversity and enrich the campus.

“That year forward, it just grew and grew,” recalled Teresa King, assistant director of International Education. “Every year, they set the bar higher than the year before.”

Students began preparing food for the banquet early in the morning. By the time dinner was served, the smell of curries, flavorful soups and sauces, and decadent desserts filled the entire Muse Banquet Hall.

The guest speaker at this year’s event was Rookmin Maharaj ’96, a former ISAC student.

“Being a member of such a unique group on campus instilled in me the awareness and appreciation for the world, not through travel brochures, videos and books, but through friends and their life stories,” she told the audience. “As our intricate web of experiences, goals, dreams and friendships got even more interwoven, the bond of belonging to this group strengthened.”

Throughout the evening, there were several special song, dance and fashion performances, and numerous trips to the food line for seconds and thirds.

“The banquet was extraordinary,” said co-president Bismark Amofah, a junior chemistry major. “The food was absolutely fantastic. The diversity of our chefs perfectly reflected the food that was made. With each bite that was taken, I felt a connection with each culture that influenced the food.”

Professional Development for the Practical

Teaching classes during the day and grading papers and spending time with family at night add up to long hours and a busy life for a secondary math teacher.

Taking time out to attend professional development classes can seem like a daunting task. Who has the time?

Radford University’s Math Education Content Area Studies program offers licensed Virginia mathematics teachers an opportunity to enroll in courses in which they can earn a master’s degree or a mathematics certificate. And it’s all online.

“One of the strengths of this program is that it is all online, and that draws a lot of teachers to it,” said Darryl Corey, the program’s director. “The last thing teachers want to do is leave work and go sit in a classroom. Through this program, they can go home, be with their families, still attend classes and still get a master’s degree and the professional development they seek.”

Teachers enrolled in the program also have an opportunity to learn for two weeks onsite at the NASA Langley Research Center in Hampton. “There, they learn how to take real-world mathematics applications and turn them into lessons for the students,” Corey said. “So, when they leave there, they have lesson plans that are not theoretical, but based on real data and experiences at NASA.”

The Business of Opportunity 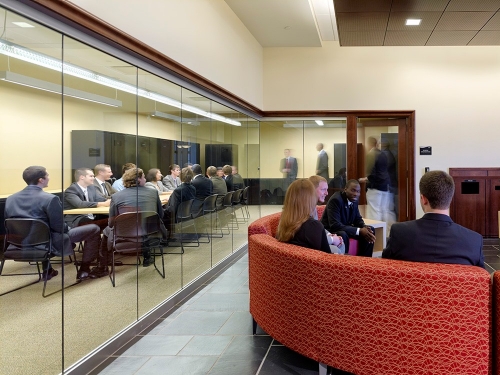 Kyle Hall, the College of Business and Economics (COBE) building.

Radford University's College of Business and Economics (COBE) has introduced a new program that will push its students “to a higher level of achievement and learning,” said the college’s dean, George Low.

The COBE Fellows program is a cohort of 15 business students who have an opportunity to work with a select group of Radford University faculty to develop a unique perspective of the global business environment and gain cross-cultural competencies to enhance their university experiences and careers.

The four-year program includes selected courses with other COBE Fellows, faculty-student mentoring, networking with global business executives, job-shadowing opportunities and internships. Fellows have opportunities for immersion learning excursions during and between semesters, and short-term or semester-long study-abroad programs. COBE Fellows will be encouraged to apply for Radford University Foundation scholarships.

Sienna Kellum said she chose to apply for COBE Fellows because “it seemed like a program that would put you ahead, particularly with the internships and shadowing, the one-on-one mentoring with faculty and working with people who have been in this line of work.” Kellum, a management major from Crozet, said “I feel like this will put me on the right track and get me there.”

Mauricio Rosales chose Radford University because of the COBE Fellows program. “I decided really early that business is what I love, and I have a real passion for it,” said Rosales, whose family moved to the United States from Bolivia when he was 3 years old. “I think if you’re going to do something, you should do it in the best way possible, and I really think this program is an opportunity to do it in the best way possible.”

For the first two years, participating students will be enrolled in pre-business courses.

“They will enroll in general university courses plus economics, statistics, calculus and accounting,” Low said. “Students will declare a business major after their sophomore year and move into finance, accounting, economics, marketing or management.”

The COBE Fellows program is more than a classroom experience. It includes professional development activities, such as interacting with the college’s executives-inresidence and trips to Washington, D.C. and New York City to interact with business professionals. When students reach the spring semester of their junior year, “they will be strongly encouraged to study a full semester abroad” at an institution with similar academic tracks as COBE, Low said.

Karissa Tobin of Forest plans to study management, marketing and “something in art,” she said. Tobin also aspires to be a welder, and someday, operate her own welding business. “The COBE Fellows program has what I want to do,” she said.

Low said the program’s professional development enhancements and experiences “will equip students to be more prepared for business internships and careers. Employers are looking for the best students, and the COBE Fellows program will identify the best students and then challenge them by giving them advanced tools that will help them be successful following graduation.”

To be eligible for the program, applicants must be incoming pre-business freshmen and meet at least two of the following qualifications: achieve at least a 1,100 SAT or 24 ACT; have a 3.5 or higher high school GPA; and be in the top 20 percent of their graduating class.

“Everybody in each cohort is going to be good academically, so the faculty can push them harder, further and go deeper into an advanced level of business discussions,” Low said. “Everyone will benefit from this competitive program.”

Sarah Kelleher is double majoring in business and dance. The Upton, Massachusetts native said she sees the group growing together quickly. “There are only 15 of us, and I feel like we’re going to be a family after four years,” she said.

Not Asking for "Super Hero" Status

Matthew Smith is the new School of Communication director.

Smith took leadership of the SOC this year as the College of Humanities and Behavioral Sciences (CHBS) was consolidated in a single building for the first time, creating new opportunities for collaboration and hands-on learning among its departments.

But first, he made his 10th consecutive visit to San Diego’s Comic-Con International. Each year, Smith leads a field study at the convention, a project he began in his previous post at Wittenberg College in Springfield, Ohio, where he also taught such courses as media literacy, television criticism, media law and graphic storytelling.

“Comics, and all the media surrounding them, have incredible power to articulate the human condition,” Smith said. “They speak to our inner aspirations.”

For Smith, the SOC directorship isn’t about becoming Dr. Doom, but rather leading his team of Avengers. He spent the spring and summer reaching out to faculty and asking them about their visions for the School of Communication.

It’s important for a new leader to spend time listening. he said. “I believe in working with people to realize a mission going forward.”

There were numerous engaging events during Homecoming and Family Weekend Oct. 14-16, 2016.

A campus wide service project resulted in the collection of more than 14,000 food items.

At Radford University, public service is paramount. But, then again, so is academic inquiry. So which comes first?