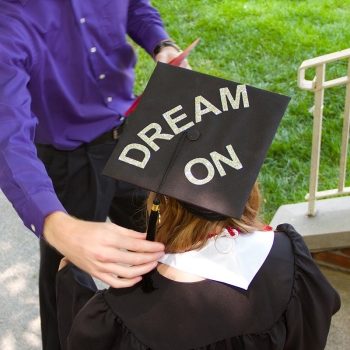 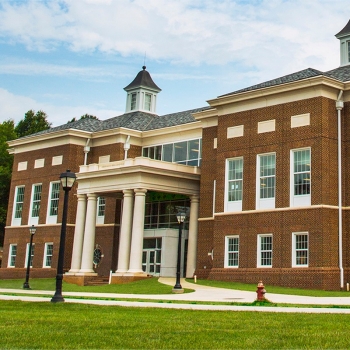 Radford University celebrates the opening of the College of Humanities and Behavioral Sciences Building. 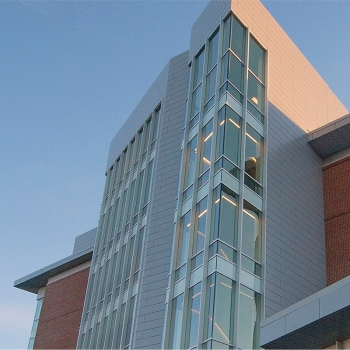 The Center for the Sciences grand opening. 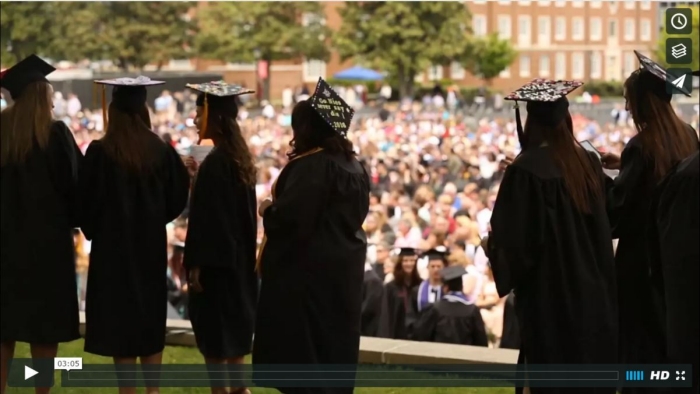 Radford University conferred degrees on 2,011 undergraduate and graduate students at its spring commencement ceremonies in May.

One of those was Mikala Reedy, a social science major from Saltville, who said her graduation day felt “surreal.”

“I can’t believe it. I’ve loved Radford because it’s beautiful, and I’ve had a lot of fun here, especially with these guys,” she said, pointing to friends before the ceremony began. “I’m going to miss them the most. We’ve spent a lot of time together. We’ve learned together, and today we’ll graduate together.”

U.S. Sen. Mark Warner delivered the keynote address, saying “Congratulations. You made it,” and offering three pieces of advice to the graduates. The senator implored the graduates to not fear failure — “In this country you can always pick up and try again,” he said — to participate in democracy, and to “never ever, ever forget to call your mother.”

Following the main ceremony, each of Radford University’s colleges held individual ceremonies across campus, continuing celebrations throughout the day.

Student Government Association President Colby Bender ’16 reflected on his time at the University, saying “It was a privilege to be a student at Radford University, and I never took a single moment for granted.”

Bender, a political science major from Chambersburg, Pennsylvania, said “it’s hard to believe this journey is finally coming to an end, but with an end comes a new beginning.”

Graduating from Radford University “feels a little scary, but really uplifting and exciting,” said Deanna Meckel, a theater major from Chantilly. “I’m going to miss the big family we had as theater majors. It was nice to have people support you, both faculty and friends.”

“I am looking forward to making the transition from student to teacher. The education department has always been there for me, and I’m excited about the future,” the interdisciplinary studies major from Harrisonburg said as he joined family members for an impromptu photo before the main ceremony.

Baker’s grandmother, Brenda Pickens, chimed in, “He has made our day. Seeing him graduate is such a thrill.”

The day before the main ceremony, the University held its 29th annual Graduation and Hooding Ceremony for students of the College of Graduate and Professional Studies.

“I’m overwhelmed. It’s exciting,” said Kathleen Degnon, who earned a master’s degree in corporate and professional communication. “I feel like a totally different person than two years ago. I look at the work I’ve done, and I’ve definitely gained a lot. I also got a lot of opportunities and real-world experience.”

Other commencement ceremonies that day included the ROTC commissioning of 14 ROTC cadets into the United States Army and one student into the U.S. Navy Nurse Corps. The School of Nursing and Doctor of Physical Therapy program held afternoon pinning ceremonies for graduates, and a Multicultural Congratulatory Ceremony was held that night in the Bondurant Auditorium.

There were 516 undergraduates who received degrees in science, technology, engineering, mathematics and health (STEM-H) disciplines. The most popular major was interdisciplinary studies with 168 graduates. Criminal justice was the second most popular with 141.

The number of first-generation graduates totaled 609.

Graduates ages ranged from 20 to 60, and four graduates were celebrating birthdays on commencement day. In addition, four sets of twins graduated during the spring 2016 ceremony.

Photo Gallery: President Hemphill has the honor of cutting the ribbon at the CHBS building opening ceremony.

The College of Humanities and Behavioral Sciences (CHBS) at Radford University officially ushered in a new era with a ribboncutting ceremony Sept. 16, 2016 that unveiled the building to the public.

Radford University President Brian O. Hemphill’s vision is to transform the University “into an innovative, premier university in the Commonwealth of Virginia and beyond with a keen focus on teaching, research and service.” The academic learning spaces housed in the new building will help guide Radford University toward that vision.

“Innovation will become the new normal as this university moves forward,” said President Hemphill. “In this building, you can see how Radford University is already innovating to achieve its teaching and learning missions.”

The 143,600 square-foot building is home to unique learning spaces, including a broadcasting studio, a courtroom, an emergency operations center and a social media watch center. These learning spaces give students professional experience prior to entering the job market.

The ribbon-cutting ceremony, which officially unveiled the largest academic building on Radford University’s campus, was a culmination of the efforts of all involved in the planning, construction and move-in processes.

“The CHBS building ribbon-cutting ceremony was an important milestone for the entire college,” said CHBS Dean Katherine Hawkins. “Our faculty, staff and students are uniformly thrilled with our new home and are actively exploring the full potential of the building.”

“This is a great day,” said Faculty Senate President and Chairman of the Department of Philosophy and Religious Studies Carter Turner. “For our college, this building is an enormous upgrade in the quality of office space we were in for a very long time. It’s hard to describe how a change like this affects you, but it definitely puts pep in your step. We’re better able to serve our students.

“It’s inevitable that the faculty in this college will interact more often and share ideas with more frequency,” Turner said. “This space — in both small ways and large — will add fuel to our intellectual lives and professional pursuits.”

SGA President Jacinda Jones, a media studies major, is eager to use the state-of-the-art facilities.

“I encourage each of my fellow Radford students to take advantage of everything it has to offer,” Jones said. “I encourage students in different colleges to take electives from departments within CHBS. The building now matches the faculty — top notch!”

Krisha Chachra of Radford University’s Board of Visitors attended the ceremony and offered remarks on behalf of the Board.

“By experiencing integrated inquiry environments that accommodate faculty, student and community interaction, Radford students will graduate with the capacity and openness to contribute,” Chachra said. “They will be anchored in their disciplines, ready to understand, explore and create solutions to complex problems. They will be ready to make a difference in the world.”

Following the ribbon-cutting ceremony, CHBS hosted a reception in and tours of the new building.

“The ceremony provided the university community with a strong signal that the college has begun an exciting new chapter in its history,” Hawkins said. “Our future is definitely bright.” 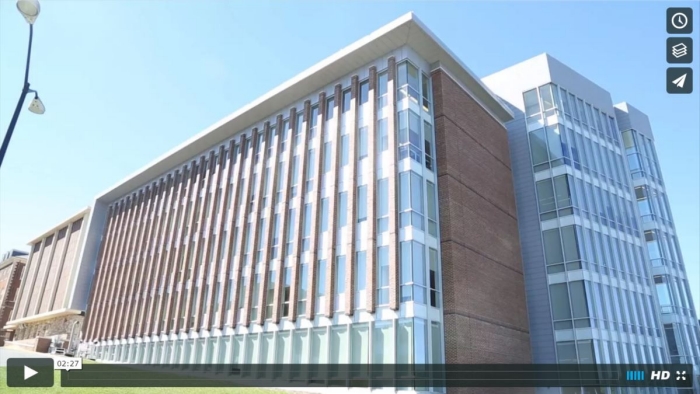 Video: The Center for the Sciences grand opening.

Radford University formally celebrated the opening of the new Center for the Sciences on Oct. 14, 2016, and humans weren’t the only participants.

Drones had a role in the ribbon-cutting and dedication ceremony for the $49 million, 114,000-square-foot facility, which officially opened in spring 2016. In addition to state-of-the-art classrooms, laboratories and office spaces for the departments of biology, chemistry and anthropological sciences, the building also houses:

• the Artis Computing Laboratory for the Biological Sciences

• a Novozymes Bioinnovation and Teaching Laboratory

• the Museum of the Earth Sciences

“This building is a gateway to the wonder and power of science and technology for our campus community and the New River Valley and Southwest Virginia communities,” said Radford University President Brian O. Hemphill at the ceremony. “Inside, our students and faculty will embark on challenging projects that will enable students to be immersed in collaborative learning.”

On behalf of the student body, mathematics and biology major Hanna Mitchell shared how the new facility has already transformed her educational experience and become a “second home.”

“This building is a dream come true, and I know others feel the same,” Mitchell said. “The ability to literally hide in a corner of the building and study genetics is something I dreamed about in high school.”

Radford City Public Schools Superintendent Robert Graham, also in attendance, spoke of the exciting partnerships the center will spark between the city and the University.

“Thank you all for helping us make a difference in the lives of our children,” Graham said. “We look forward to sharing this wonderful resource with you all. Is Monday too soon?”

College of Science and Technology (CSAT) Dean Orion Rogers joined President Hemphill and university colleagues to cut the commemorative ribbon as drones captured the action from above.

“The Center for the Sciences will allow our faculty and students to take advantage of new opportunities, to create new knowledge, to go places they never imagined they could go scientifically and intellectually and to achieve academic and professional success they never dreamed was possible,” Rogers said.

The spectacle was capped by a colorful chemical display that produced billowing clouds of smoke.