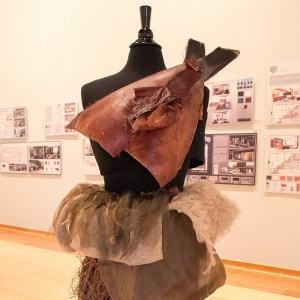 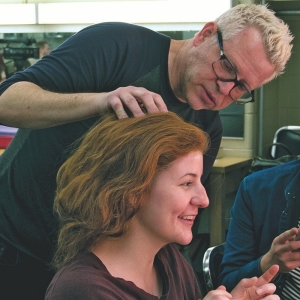 The Horror of it All

Alumnus Monte Haught '91 has worked as a make-up and hair stylist on "CSI: NY," "Glee" and the "American Horror Story" television series. 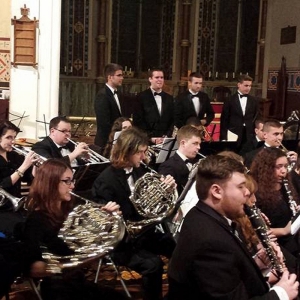 The Wind Ensemble played at the Royal Irish Academy of Music, St. Mary's Cathedral in Killarney, Trinity College in Dublin and the Dublin Airport. 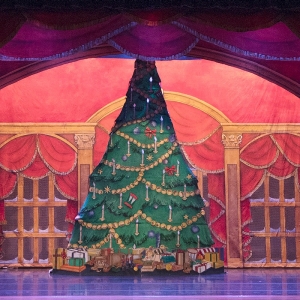 Audiences to the 2016 production of the university's "The Nutcracker" experienced the unveiling of new scenic elements. 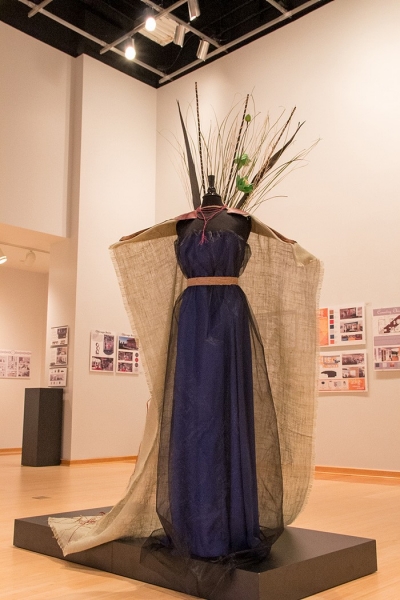 For 48 hours beginning on Feb. 26, they worked in this space completing the department of design’s annual charrette.

Dictionary.com describes the term charrette as an intensive final effort to finish a design project before a deadline. The challenge was for each to create a finished design in 48 hours for the Senior Exhibition at the Radford University Art Museum.

“Over the years, the charrette has evolved more toward a creative expression using the body as a ‘prop’ for an artistic creation and away from using an assigned inspiration to design traditionally wearable garments,” said Associate Professor of Design John Jacob about the fifth year of these projects.

To start the challenge, he presented the students with palm fronds. Then the students drew numbers from a hat to see who would get first choice.

Jacob said the fronds were Professor of Design Kathy Mitchell’s contribution. Last summer during a professional meeting, she found the fronds falling onto the sidewalk around her hotel. She thought they provided interesting shapes. She carefully collected them and brought them back to Radford.

Before heading into the official charrette, Mitchell showed her finds to the seniors.

“They can work out their inspiration and gather other items that they may want to use, but they don’t start working on it until the established time,” she said.

In preparation with this information, Howard put together an inspiration board with pictures of whimsical forests and other images.

“My goal was to create something that exemplified the beauty of nature and represented a queen or goddess of nature,” she said.

Charest also incorporated the theme of a goddess into her work. An island deity was her inspiration.

Wells’ vision integrated her inspiration of armor into an island warrior theme.

When Jacob announced the project was underway, the four immediately started on their projects. They pulled out sketches, fabric and pizza (for sustenance, of course). They bantered, laughed and supported each other throughout the entirety of the challenge.

Charest said the four seniors are no strangers to long hours spent on projects and working side by side. They have bonded and are close friends. During the charrette, however, they did go home to sleep.

The end results of their 48 hours were on display during the Department of Design’s Senior Exhibition. This year the show started in mid-March at the Radford University Art Museum in the Covington Center, where their reception also took place. Then, the work was moved to the museum’s downtown gallery space for two more weeks.

And though they had much to do during their final semester at the university, this project provided a change of pace.

“I think it helps to get assignments like this to help us expand our mind outside the normal assignments of designing for a customer range and being able to explore our creativity,” Charest said

The Horror of it All 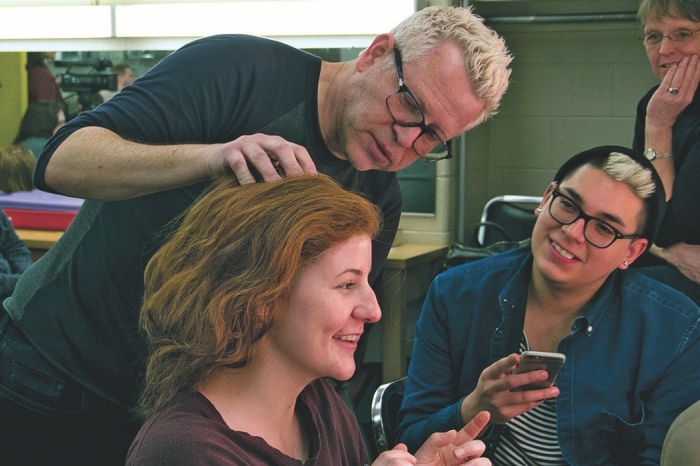 He keeps wigs in plastic bags. Some are fit for demons, bearded ladies and showgirls. What others view with horror, theatre alumnus Monte Haught ’91 sees for potential reuse.

The wigs are his personal collection from “CSI: NY,” “Glee” and the “American Horror Story” television series. For the latter, he won three Emmys and two Make-up Artists and Hair Stylists Guild Awards.

He shared these with Radford University theatre majors during a hair masterclass he taught in February. Using one of Kathy Bates “American Horror Story: Freak Show” wigs as a demonstration for how to fit a wig on an actor for stage or television, he shared his Emmy-winning techniques.

He also talked about his road to winning Emmys starting with his years at Radford University.

Having trouble finding his niche, he remembered advice from Monica Weinzapfel, professor of theatre.

“Maybe you should think about doing hair,” she said.

It resonated. He attended the Graham Webb International Academy of Hair in Washington, D.C. Through one of his school peers, he landed a job at Arena Stage, working with John Aitchison, wig master.

This led to employment at the Kennedy Center with the “Lion King.”

“Around 75 people interviewed and didn’t get the gig,” he said, but because he learned how to sew at Radford University, he landed the position.

Then he spent nine years on Broadway until he met Melina Kanakaredes during “Cabaret.” She helped him land a long-term gig in Los Angeles, where he did her hair for six seasons of “CSI: NY.”

Then he did hair for a season of “Glee” and worked with Radford alumna Jayma Mays ’00, during which time he received his first Emmy nomination.

The following year, he began hair design for “American Horror Story.” This is the show that landed him his Emmys.

He works with celebrities such as Jessica Lange, whom he remembers when he thinks about the awards.

Before his first win, she noticed he was preoccupied and he mentioned he had jitters about the upcoming award ceremony.

He told her it was an honor just to receive a nomination, but she cut him off.

“But it is wonderful to win,” she told him. “Be proud of that. Don’t be ashamed if you win.” Both won that year.

In addition to working in the hair industry, he also represents it on the Board of Governors at the Television Academy of Arts and Science in a peer-elected position.

Now Haught is an inspiration to current Radford University students, but the wigs are back in their bags, waiting for the next moment to terrify and thrill. 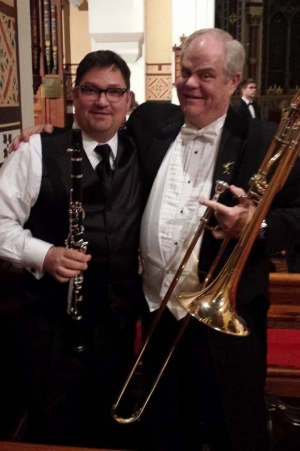 They played at the Royal Irish Academy of Music, St. Mary’s Cathedral in Killarney, Trinity College in Dublin and the Dublin Airport. These were concert stops for the Radford University Wind Ensemble’s March 2016 trip to Ireland.

This unprecedented tour for the Department of Music was the largest performance ensemble the University has sent overseas. It included 42 students and four faculty members. And 20 years have passed since the ensemble last traveled.

Director of Bands and Instrumental Music Education Wayne Gallops led this effort. The planning for this trip began three years ago when he polled band members about what country interested them most and was affordable. Ireland topped the list.

“Because our university had such little experience touring large, intact ensembles overseas, I felt such an extended endeavor/process would reap lasting benefit for our students, college and university,” he said.

For the students who auditioned for their seats in the Wind Ensemble, there are many benefits to touring overseas with the group. They received Scholar-Citizen Initiative course credits and global life lessons.

“The opportunity to perform internationally opens up one’s perspective on how universal music is,” said Jeremy Marks, a senior percussion student. “Playing with other students in Dublin was especially rewarding. Growing up thousands of miles apart, we were still able to just sit down and make music together.”

Their largest audience was in Dublin at the airport. Gallops said thousands witnessed this two-hour charity concert, which raised funds for cancer survivors. A local concert band that regularly performs there hosted them. Ireland’s SKY Network Television interviewed members of the Wind Ensemble and played clips of the performance.

Gallops said this was a great networking opportunity for the University, and they may have recruited a new oboist from Virginia who was also visiting at the same time.

During their day at the Royal Irish Academy of Music, Radford faculty held master classes and several of the ensemble’s principal musicians played side by side with Irish students. Later, the groups switched and the academy’s conductor, Fergus O’Carroll, worked with the Radford students.

O’Carroll is the head of the Wind, Brass and Percussion faculty and is the principal horn player with the National Symphony Orchestra of Ireland. He is also a composer. Upon the Wind Ensemble’s first concert back in the U.S., they played the American premier of O’Carroll’s “Song Without Words.”

A McGlothlin travel grant, the Scholar-Citizen Initiative, the College of Visual and Performing Arts (CVPA), the Department of Music, patrons and students provided funding for this trip.

“This tour represents a larger CVPA initiative for the coming years,” said Margaret Devaney, dean of the College of Visual and Performing Arts. “In representing the college internationally for the first time with such a large ensemble, we hope to increase the number of international travel performance opportunities for each department represented by the college. This tour paves the way for our global interactions at international venues for the foreseeable future.”

New scenic elements from Radford University's production of "The Nutcracker."

It was springtime at Radford University, but visions of sugarplum fairies danced in the minds of the School of Dance and Theatre faculty. They had come together to discuss the previous holiday season’s performance of “The Nutcracker.”

At the time of the production, they discovered issues with the 20-yearold, traditional American ballet-style scenery. Previously destroyed or dryrotted, it was in need of replacement.

But this provided a unique opportunity for the school. At the meeting, the faculty decided it was time to design new scenic elements for the entire production.

“It was important for Inessa Plekhanova, our director and choreographer, that we create a visual that reflected old-style Russian ballet more than contemporary Americanstyle productions,” said Jimmy Ray Ward, assistant professor of theatre. He is the new scenery designer.

Esthetics of traditional Russian ballet storytelling, reflecting Alexandre Dumas, pere’s original “The Story of a Hazelnut-cracker” is the new design theme. The goal was to make the university’s production have the essence of a spectacular fairy tale, full of magical transformations of simple objects such as a growing Christmas tree.

Under Ward’s guidance, this collaborative process included student participation with scenery painting. Chosen for their demonstrated skills during a recent scene painting class, they included senior theatre majors Morgan Hardy and Chelsea Wood, along with double theatre and art major Yaritza Pacheco. They worked on the scenery’s first phase during the 2015-16 winter break.

“The process of painting the set is like any other production,” Pacheco said. “However, it is very exciting, and a little nerve-racking, to know that this set will be seen by audiences not just for a couple of weekends or a month, but instead for quite a few years.”

Whereas most of the school’s sets last for one production, “The Nutcracker” scenery is archival. It is produced at a quality level allowing it to last multiple seasons or for up to a decade.

The scenery comprises several sections. There are three scenes, which include four elements. Each has a backdrop; a portal that is an archway made by combining wings/legs and border; a set of legs, and a border. Legs are drapes used to hide the wings (stage entry points for the actors) on both sides of the stage. Borders are short draperies that span the width of the stage used to hide lights and any scenery that is kept above the stage.

In addition, a false proscenium drop was created, which serves as a frame around the overall stage. And one cannot exclude the grand Christmas tree or a large grandfather clock and other assorted scenic elements.

Audiences to the 2016 production of the university’s “The Nutcracker” in November experienced the unveiling of this reconceptualized production.