In the midst of a busy and distinguished career, Eugenio Piñeiro-Soler ’79 remains a Highlander at heart. 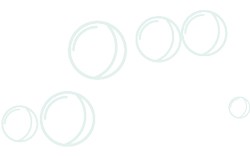 In a professional life that has spanned over 30 years, Eugenio Piñeiro-Soler ’79 has been a successful commercial fisherman, a fisheries captain and an entrepreneur in his native Puerto Rico and throughout the Caribbean.

He has worked alongside multiple oceanic conservation and administrative organizations, some of which include the Caribbean Fisheries Management Council, the International Commission for the Conservation of Atlantic Tunas, the International Whaling Commission and the Marine Protected Area Federal Advisory Committee, amongst others. He has even served under four U.S. presidents at the Department of Commerce and, he said, met some of the most beautiful and powerful scientific minds in the country.

But every time Piñeiro-Soler returns to Radford, he finds himself drawn to the New River, where he sits for hours enjoying its simple, quiet natural beauty.

“It’s reassuring to know that it is there and as beautiful as the very first time I saw it,” said the Radford University alumnus and native of Puerto Rico. His first view of the river and the small college campus located in the heart of the Blue Ridge Mountains was over four decades ago when he began classes as a philosophy student. All these years later, the Highlander spirit is still strong within Piñeiro-Soler, and he cherishes the memories he made at Radford to this day.

“I was just a kid when I came to Radford, but it meant so much to me as I grew as a person,” Piñeiro-Soler recalled. “I don’t live in Radford, but Radford lives in me.”

Hard Work and the “Luck” of the Highlander

Piñeiro-Soler describes himself as a “lucky man,” but luck had little to do with the success he has had both at Radford University and in life beyond the campus. Instead, his success can be attributed to research, hard work and determination, which helped him achieve some very impressive life goals.

When he was exploring where he would attend college, Piñeiro-Soler decided to dive into some intense exploration of what various institutions had to offer. He wanted to pursue a law degree eventually and felt it was crucial to develop a strong ability to think critically, identify issues and create solutions. He considered colleges and universities across the country, but Radford became a natural choice.

“I did my research and found that the faculty was absolutely amazing,” Piñeiro-Soler said. “That had a big influence on me choosing Radford. Aristotelean logic and ethics are my great passions, and Radford’s program was excellent in that area.”

Over the next four years, Piñeiro-Soler worked diligently in his classes, while making lifelong friends and lasting memories as a Highlander.

“My fondest memories of Radford are its people,” Piñeiro-Soler remembers. “I think about my friends and teachers often. Tom ’79 and Kathy ’79 Lillard, Randy Metger ’78, Mike McCardle, Sandra Russell, Tony Yankus, M.S. ’79, Dr. Vengrin and many others. They helped me become who I am today.” 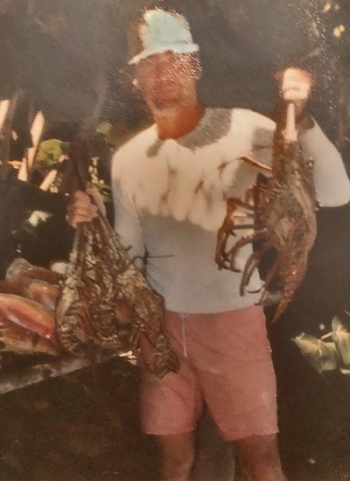 Piñeiro-Soler said that seeing those old friends, along with the great climate and natural wonders of the region, make it hard to leave every time he has to catch a plane back home. For those reasons —and another that will be explained later — Piñeiro-Soler makes the trek back to Southwest Virginia two to three times per year.

In 1979, Piñeiro-Soler graduated from Radford with his bachelor’s degree. Soon after, he earned a Juris Doctor from the Catholic University Law School of Puerto Rico. He then began a long and illustrious career working with the fisheries workforce.

“It was a very natural transition for me,” Piñeiro-Soler explained.

“I grew up in a tuna town in western Puerto Rico where my father, who was an engineer and real estate industrial developer, brought all the tuna plants to the island.”

In the 1950s, poverty was prevalent in the Caribbean, and Puerto Rico was no exception. Piñeiro-Soler said his father was an expert when it came to creating jobs and helping people. By bringing the plants to Puerto Rico, he established a thriving industry, giving many of their friends and neighbors the ability to make a living. By watching the positive evolution of the economy based on his father’s business, Piñeiro-Soler understood how important keeping the industry healthy was to Puerto Rico.

“I had a natural understanding of the international aspects of fisheries and how important it is to protect our U.S. jobs, our natural resources and our role as leaders in the world regarding sustainability, resilience and the economy,” he said.

With this experience, Piñeiro-Soler eventually became the deputy assistant secretary of commerce for oceans and atmosphere. In this role, he engages in high-level development and negotiation of National Oceanic and Atmospheric Administration (NOAA) international fisheries policy at bilateral and multilateral meetings with foreign nations. He also participates in various external activities and meetings as the deputy assistant secretary and NOAA administrator deem appropriate.

“I provide general policy guidance on various aspects of NOAA’s international fisheries work, such as sustainable management of fisheries, the protection of marine resources, supporting the export of U.S. fisheries products and combating illegal, unreported and unregulated fishing,” he said.

In addition, Piñeiro-Soler participates in several scientific studies every year to ensure the health of fisheries in various locations. That is where his next big accomplishment would surface.

In 2005, while conducting research and sampling for deep water snappers with Texas A&M for NOAA, Piñeiro-Soler discovered the Odontanthias hensleyi. It was the first documented discovery of a new fish species in the Atlantic Ocean in the 21st century.

“I was in the middle of some rough weather fishing at about 2,000 feet in the Mona Passage,” Piñeiro-Soler said. “For days, something had been chewing on our baits and not getting hooked. Some of the crew said it was a shadow or a ghost fish. But something wasn’t right, so I decided to add a special set of very small hooks to see if we could find out what it was.”

The hunch paid off, and Piñeiro-Soler was stunned to reel in a never-before-seen fish species. He was thrilled, while also feeling a bit sad.

“It was a majestic creature,” he said, “but I have to tell you that I felt sadness deep inside. I knew I had discovered something that had never been seen before right away, but I was sad in my heart for having taken his life.”

At the end of the day, Piñeiro-Soler recalled, it was a scientific project that someday could benefit humanity, so he accepted the capture and the consequences. Piñeiro-Soler said it took six years until the new species was officially certified.

“The rest is history,” Piñeiro-Soler said. “It now sits at the Smithsonian literally feet from my D.C. office. At home, we refer to the fish as ‘La Gricelita’ as a term of endearment to my son’s mother. ” 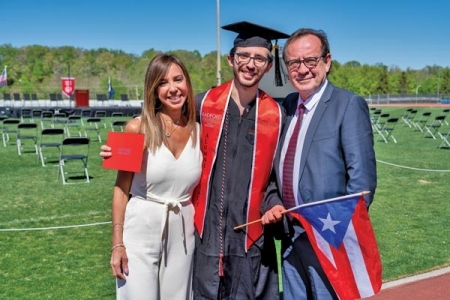 Piñeiro-Soler at the graduation of his son, Noel Piñeiro Mamery ‘20 (center), along with Gricel Mamery Muñoz.

A New Generation of Highlanders

Today, Piñeiro-Soler lives in the mountains of western Puerto Rico with a wonderful view of the Atlantic Ocean and very close to the forest. However, he often makes those trips back to the New River Valley for a very important reason: his son, Noel, has followed in his footsteps as a Highlander. “My son came along with me to Radford to visit some friends while he was in high school,” said Piñeiro-Soler. Noel finished his undergraduate communication degree last spring and has now begun work on a graduate degree in communication at Radford. His mother is Gricel Mamery Muñoz, a television hostess and comedian best known for her appearance on the show “Anda Pa’l Cara” as a color commentator for the Spanish language program from Puerto Rico. Though Piñeiro-Soler and Gricel are now divorced, they remain close and agreed that Radford was a perfect place for their son to get his education.

“We are both very well-known public figures in Puerto Rico,” Piñeiro-Soler said.

“It was in Noel’s best interest to have privacy in his life and grow and develop himself by himself, without cameras following him everywhere. We are grateful for the safe haven Radford provided him.” 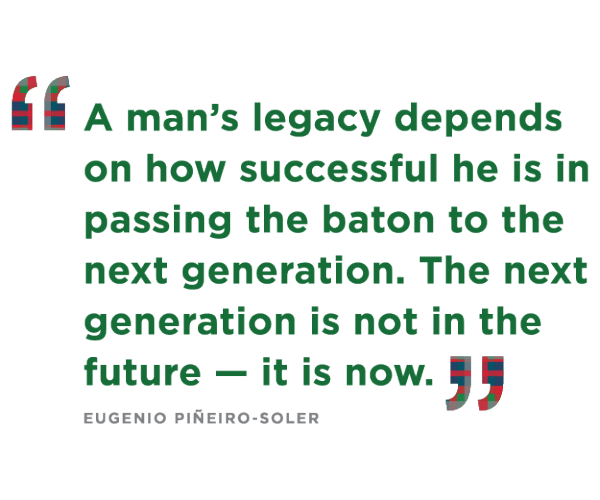 Piñeiro-Soler said that when he comes to Radford to visit his son, the reaction is still the same as it was when he was a student many years ago. “Every single time, my heart pounds with the same excitement of my first visit more than 40 years ago,” he said.

He stays involved with Radford University as an executive in residence and serves as a member of the Virginia Tech Fish and Wildlife board.

“I take my positions both at Radford and Virginia Tech very seriously,” Piñeiro-Soler said. “A man’s legacy depends on how successful he is in passing the baton to the next generation. The next generation is not in the future — it is now.”

In early May, Piñeiro-Soler had the chance to make a trip to town for Noel’s undergraduate commencement ceremony, which was delayed from 2020 due to the COVID-19 global pandemic. He said traveling back to Radford was a wonderful experience and that he was as exhilarated for his son’s graduation as if it were his own.

His only regret when it comes to visiting his home away from home is having to leave when his stay is over. “I hate it when I leave,” he said. “Whenever I go and I see Tyler Avenue in my rear-view mirror, I feel as if I am leaving behind something I truly love.”