Brian Robinson ’93 stood beneath the glow of New York City lights on a breezy night in early May, celebrating the unveiling of Oracle, his friend’s 25-foot-tall bronze sculpture that now boldly welcomes visitors to Rockefeller Center’s Fifth Avenue entrance. 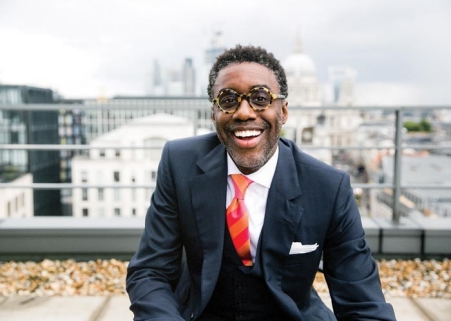 His friend is world-renowned artist Sanford Biggers. He had invited Robinson to join him at the unveiling, along with a few other artists and friends, Rashid Johnson and Julie Mehretu, to name a couple. The unveiling was a monumental occasion that garnered attention from all around the world. The “Today” show was there to cover it, and so was The New York Times.

“It was a wonderful event, and they are rock stars in the art world,” Robinson said of the gathering, “and I was in their company 12 hours ago.”
Robinson isn’t boasting, but simply reflecting on the moment and others that have dotted his journey from flipping burgers and mopping floors at a Northern Virginia Burger King to where he is now, working in his fourth-floor office at 200 West St. in Manhattan as a newly minted partner at Goldman Sachs. And most recently, he was selected for a seat on the Board of Trustees of the Solomon R. Guggenheim Museum.

Robinson has always been a worker, and he’s earned his success the old-fashioned way, some might say: he’s earned it. Robinson has a “grit and grind” attitude that he learned from his father, a pipefitter his entire working life, and his mother, who worked and raised three boys, Robinson being the youngest.

“My father was blue-collar and was all about exceeding expectations,” Robinson said. “So, the bar was always set pretty high by him.”
Robinson went to work as a teenager, securing a worker’s permit at age 16. He was smart with his money from the beginning; he began investing in certificates of deposit from the time he earned his first paycheck as an investment into a brighter future. “I knew I always wanted to be in business,” Robinson said. His early aspiration was to be a broker in Washington, D.C.

The money Robinson earned from working also helped him pay for college. He discovered Radford University while touring Virginia for an affordable, in-state school where he could flourish and earn a degree in finance. “The energy and vibe on campus drew me to Radford,” he recalled.

As a student, Robinson served two years as Student Government Association treasurer, worked in the University’s finance office and sang in a gospel choir. Close friendships, too, played a substantial role, he said, reminiscing about time spent with Dante Washington ’92, Sean Peay ’91 and Stephen Barber ’92, who were athletes and Robinson’s Kappa Alpha Psi fraternity brothers. “Those relationships were so pivotal in leading me to where I am today,” he said. “We still remain very close.”

Those close relationships throughout Robinson’s Radford journey “taught me,” he said, “to experience and learn and explore for myself.”

That self-exploration manifested when Robinson worked a summer internship back home in McLean, Virginia, after his junior year at Radford.

“When I looked around the conference room table there and identified each person’s role,” he recalled, “I asked myself, ‘why can’t I do at age 20 what they are doing at 40?’”

That question inspired Robinson further. “If I get equipped enough,” through education and experience, he thought then, “why can’t I be on the same stage with those people?”

During his senior year at Radford, Robinson attended a job fair and met representatives from Merrill Lynch “and other firms,” he said. “They had a glossy brochure of the World Trade Center, and I knew from that day I wanted to work in New York City.

“I knew I had to come to the Street.”

Wall Street, that is. “They make movies about this place, and I knew I had to be successful here.”

To get there, Robinson employed his global network of Kappa Alpha Psi fraternity brothers to help him organize meetings with firms in New York. He bought a round-trip bus ticket from Radford to Wall Street and performed so well in an interview with Smith Barney, now Citi, that he received a job offer, and they paid for him to fly back to Virginia, refusing to let their new prized employee ride 14 hours on a slow, cramped bus.

The new job positioned Robinson on Wall Street, right where he aimed to be, working at the financial industry’s grandest theatre.

“I want to do things at the highest level,” Robinson reiterates, “and Radford prepared me to perform on the world’s most challenging stage, to survive and thrive in New York City. Radford is a great and amazing school, and it really prepares you.”

Robinson spent 13 years with his first firm, working seven of those in New York before moving into elevated roles with the company in London. In 2006, he transitioned to Renaissance Capital, where he joined as a partner, and in 2010 he joined Goldman Sachs in its London office. His success placed him on the Powerlist Top 100 of influential Black Britons in 2019, and living and working in London presented Robinson with an opportunity to serve on the board of the Make-A-Wish Foundation in the United Kingdom, an experience that would position him well for his future role at the Guggenheim.

While in London, Robinson, whose value for education had intensified at Radford, enrolled in courses in the corporate finance evening program at the prestigious London Business School, one of the top business schools in the world. “I wanted to invest in my career, to sharpen my skills,” he said, “to continue to grind it out.”

After 19 years in London, Robinson moved back to New York in January 2019 and into a new role with Goldman Sachs as head of prime brokerage sales in the Americas. Then, in November 2020, he was one of 60 employees promoted to partner, “which means you help to lead the people and the strategy toward the future direction of the firm,” he explains.

One way in which Robinson is guiding the firm’s future is through serving as a lead sponsor for the Black Analyst and Associate Initiative. There, he mentors more than 100 people to “help put the next generation in a better place,” he said. Robinson is on the Board of Advisors for Launch with Goldman Sachs, an investment strategy that helps deliver “$1 billion to women, Black, Latinx and other diverse entrepreneurs and investors,” he said. “You talk about what you can do with a finance degree from Radford, this is it.”

Robinson leads a hectic work life. The stories you hear about people working long, tiring hours on Wall Street are true. “I’m in the office every morning at 7, and I never leave before 7” in the evening, he said. In order to alleviate stress and maintain a high level of work for so many years, Robinson invests in his physical health through regular exercise — “I run about 500 stairs from the fourth to the 11th floor for lunch every day,” he said —and invests in his mental health through Shinrin Yoku, a Japanese practice of appreciating nature. “I pay more attention to the trees and birds on the walk home,” he said.

And, of course, there’s art.

“I used to paint. I used to draw, and now I do my own neon work,” Robinson said. He is working on a neon to display in his new Goldman Sachs office that reads: Teamwork never sleeps.

“I am an artist deep down somewhere inside me,” Robinson said, “but many years ago, I realized I should recognize the great talents of the artists around me as opposed to doing so much of my own work.”

That philosophy led Robinson to a new chapter in his life, serving on the Board of Trustees and the Budget and Finance Committee at the Guggenheim. “It’s among the world’s highly esteemed institutions for art,” Robinson said, “and it’s a place close to my heart.”

Like many places of business and entertainment, the COVID-19 global health pandemic greatly diminished tourism to New York, and thus the number of visitors to the Guggenheim. Robinson and his fellow board members from various backgrounds are using expertise to help remedy
the situation.

Promoting it locally to the city’s diverse populations “is one way,” and appealing to young people “is another,” Robinson said, colloquially calling it “The Gugg” as a cool, young and hip way to refer to the culture
and art center designed by Frank Lloyd Wright.

“I’m convinced that one way we’re going to reinvent the Guggenheim and get more engagement is by appealing to youth and creating more Instagram-able moments for them to share on social media with their friends.”

Art and culture have always been “very near and dear to me,” Robinson said, thinking of the Guggenheim and its mission, while also reflecting back to the night in early May when his friend Sanford touched so many people and created a community buzz with the Oracle unveiling at Rockefeller Center.

“That’s what we want to do,” Robinson said. “We want to create those moments of joy and promote a love for art and solidify the next generation of people who visit and enjoy the art and culture the Guggenheim has to offer.”