Onetime student-athletes Greg and Lauren Juanarena give back to Radford.

A love of sports brought Greg ’12 and Lauren Juanarena ’10, M.O.T. ’12 to Radford University, and a passion for giving has kept them connected.

Both grew up with competitive spirits and high standards for athletic and academic achievement. Lauren walked on to the volleyball team at Radford during the first semester of her freshman year. By the second semester, she earned a scholarship. She majored in exercise, sport and health education to complete the prerequisites needed to attend occupational therapy school, which she also completed at Radford.

Greg was drawn to Radford not only by sports, but also by the tight-knit community. He walked on to the baseball team and maintained a substantial academic scholarship that covered most of his costs during his four years at Radford. Being interested in technology and building things from a young age, majoring in computer science was a natural fit. 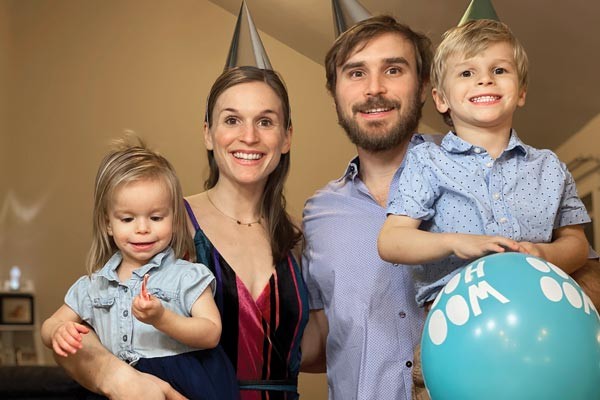 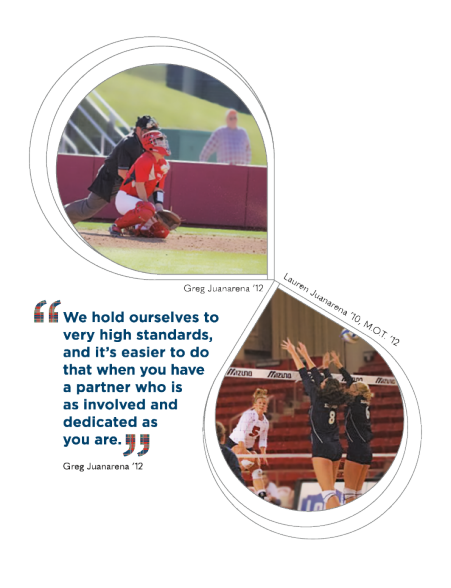 “We hold ourselves to very high standards, and it’s easier to do that when you have a partner who is as involved and dedicated as you are,” said Greg. “Lauren is an extremely competitive person, and that’s something I liked about her. I like the way she competed on the volleyball court and in the classroom.”

At the end of Greg’s final semester at Radford in May 2012, he employed the help of his mentor, Michael Hurt ’94, CEO of ARMS Software. A Radford alumnus and former baseball player, Hurt brought Greg on board at ARMS that summer in Richmond, Virginia. Greg remains with the company to this day and, looking back, calls it the best opportunity he has received.

In December 2012, Lauren graduated from occupational therapy school and joined Greg in Richmond. She has worked as a pediatric occupational therapist at Aveanna Healthcare for the past eight years and has loved her experience in the field. Greg and Lauren were married in July 2014 and grew their family by welcoming a son in November 2016 and a daughter in February 2019.

Greg and Lauren established an endowed scholarship available to incoming freshman student-athletes, with preference to those in the baseball and volleyball programs. The scholarship will be awarded to those with academically strong high school GPAs, with preference given to those from Southwest Virginia and with financial need.

The couple says their motivation to give comes from their parents, who are generous with their time and money. Greg’s parents, Doug and Sue Juanarena, have also supported the scholarship. Motivation to give also came from seeing other former baseball players donate to the program, which encouraged Greg to give as a student. Today, a plaque with Greg’s name on it can be seen on a chair in the baseball stadium due to a donation given as a student. He believes that any dollar amount helps. If students and young alumni can get into the habit of giving now, they will have even more of an opportunity to watch the programs at Radford grow.

Looking back on their time at Radford, Greg and Lauren remember how meaningful it was for them to meet supporters of the athletic program and experience firsthand the impact of their investments. They, too, want to make an impact.

“This university has given so much to us,” said Lauren, “And, now, we’re in a good place to give back.”