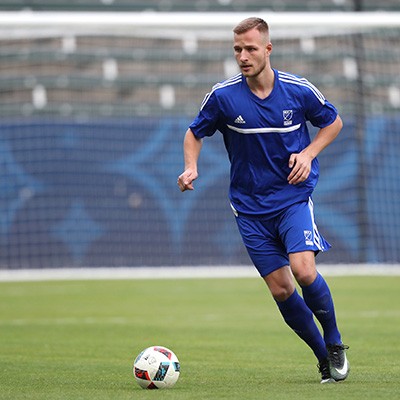 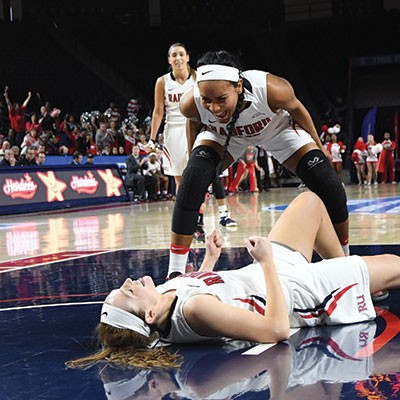 Women's basketball had one of the best seasons in program history. 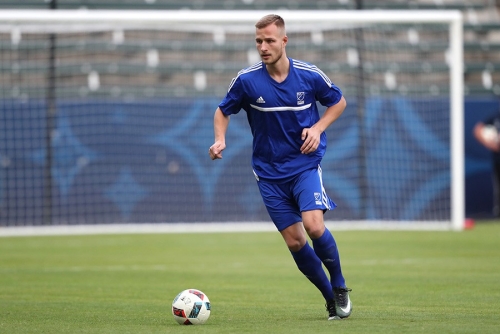 Jo Vetle Rimstad ’17 made Radford University men’s soccer history as the Harestua, Norway native was selected by the D.C. United with the 43rd overall pick in the 2017 Major League Soccer SuperDraft.

Rimstad becomes the first Highlander drafted into Major League Soccer (MLS) in program history and will join Dante Washington as the only two Highlanders to don an MLS jersey.

“I just couldn’t be happier right now. D.C. United is the perfect club for me, as I have a lot of friends in the area,” Rimstad noted. “It seemed that most Radford students were United fans, so I now have the chance to represent them when I put on the black and red.”

Rimstad was named a National Soccer Coaches Association of America (NSCAA) All-American and Scholar All-American. Rimstad became the second Highlander in program history to be named an NSCAA All- American during the Division I era. In addition to his All-American honors, Rimstad earned the fourth NSCAA All-South Region First Team honor in program history. The accolade was the third of Rimstad’s career from the NSCAA — he earned second-team honors in 2014 and 2015.

“Our University, alumni and soccer program are incredibly proud of Jo Vetle. He had an outstanding four years at Radford, both on and off the field,” said former head coach Marc Reeves. “He now gets the chance to represent Radford positively and bring great exposure to the school. He is a fantastic person who is fully deserving of this opportunity.”

Rimstad finished his career as one of the best center backs in Radford University and Big South history. In 2016, Rimstad became the second Highlander in program history to be named Big South Defensive Player of the Year. Rimstad earned All-Big South honors in each of his four collegiate years, earning first-team honors three times.

“Reevo [Reeves] sent me a text message to tell me I was going to be drafted, I just couldn’t believe it,” Rimstad added. “This is what I have been working for. I never imagined being put in this situation, because I have been enjoying playing soccer for the longest time. I have been working hard for a very long time, and it has finally paid off.”

Rimstad did nothing but win since he arrived on campus in 2013. The Highlanders compiled a 49-20-11 record over the span, including a 24-4-5 record inside Cupp Stadium. Radford won three Big South regular-season championships, one Big South Tournament championship and made two NCAA Tournament appearances during the span.

“Jo Vetle understands that it requires continued true hard work to pursue the goal of being a professional, and he has certainly earned the right to be drafted,” Reeves added. “We are thankful for D.C. United for believing in him and wish Jo Vetle the very best.”

Rimstad will join former Highlander Ryan Taylor in the D.C. United organization. Taylor is a member of the Richmond Kickers, the United’s affiliate in the United Soccer League. 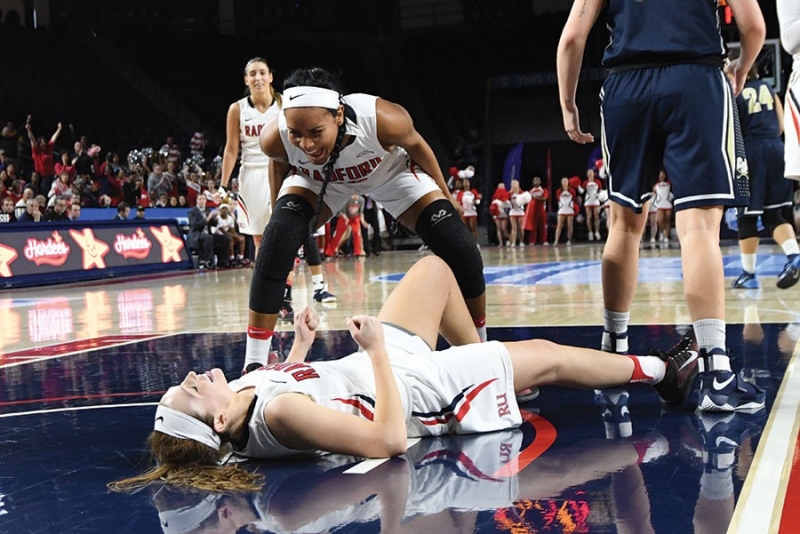 Jen Falconer, on the ground, and Jayda Worthy, standing above, celebrate.

Broken records, immense wins and heartbreak summarize the 2016-17 Radford University women’s basketball season. The Highlanders strung together one of the best seasons in program history while providing the Radford University faithful countless memories.

Dropping no more than two games in a row throughout the season, the Radford University team concluded its magical season with a 24-9 record, finishing with the second-most wins in program history. Only the 1988-89 squad won more games, compiling a 25-7 record. In Big South Conference play, Radford University finished with a 14-4 record for the second most conference wins in the team’s history.

“This season was a historical and memorable season in a lot of ways,” said fourth-year head coach Mike McGuire. “This team demonstrated a tremendous amount of effort, focus and consistency to win those 24 games.”

Racking up the wins on the floor, Radford University also racked up its first Big South regular season championship in 25 years, defeating Campbell with a thrilling 49-48 win on Feb. 27. The stout Highlander defense held off a late fourth-quarter comeback as Campbell’s game-winning attempt rimmed out at the buzzer.

As the final horn sounded, 12 faces summarized the journey to the regular season crown. Emotions of joy, relief and disbelief were on full display as the Highlanders hoisted their first regular season trophy since the 1991-92 season.

Developing the nickname “Cardiac Kids” midway through the season, the Highlanders played in nine games decided by three points or less, with five coming in the last seven games of the season. The Highlanders compiled a 7-2 record in those games, which may be due to the calm demeanor of McGuire. During McGuire’s tenure, Radford University is 21-11 in games decided by five points or less.

The growth we made as a program and as individuals is something that we are proud of."

Providing fans with suspenseful games all season long, Radford University’s lockdown defense was a major part of the season’s success. The Highlander defense finished the season ranked inside the Top 15 nationally in two defensive categories. Holding opponents to a mere 55.0 points per game, Radford University ranked as the 10th best defense in the country. The Highlanders ranked 11th with a 35.1 field goal percentage defense.

“The growth we made as a program and as individuals is something that we are extremely proud of,” McGuire added.

Walker led the team with 13.9 points per game (ppg), 2.3 assists per game (apg) and 1.5 steals per game (spg). The sophomore finished third in the Big South Player of the Year voting after averaging 14.2 ppg in league games while shooting 45.2 percent from the floor.

Proving that the motto “It’s not how you start, it’s how you finish” holds true value, White tallied double figures in nine of Radford University’s final 11 games on the season. In that stretch, White collected five double-doubles, giving her eight total.

Johnson earned herself a spot on the all-freshman team after providing Radford University with a spark off the bench all season long. She averaged 7.4 ppg and 1.6 apg while leading the team with an 80.8 free throw percentage.

After taking the job four years ago and going 7-23 in his first season, McGuire was unsure of how long it would take for his championship-winning program vision to come to fruition. McGuire has increased the program’s win totals from seven in his first season to 17, 18 and 24 over the last three seasons. Since that 7-23 season in 2013-14, McGuire has compiled a 57-36 record. 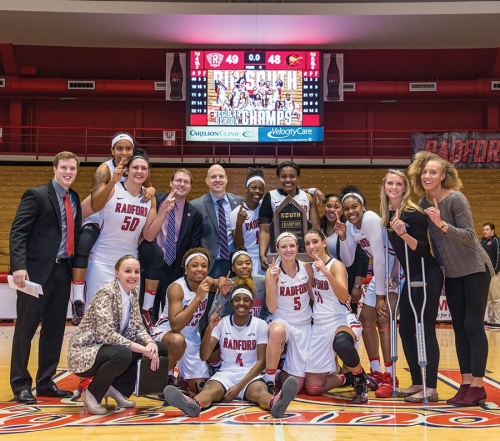 The program even collected its 700th win on Feb. 21, becoming only the second program in Big South history to win 700 games.

“When I accepted this position four years ago, we envisioned the women’s basketball program competing for Big South championships and postseason appearances consistently,” McGuire noted. “Our current team has raised the bar for our program again and has made our vision a reality.”

That vision quickly became a reality during the Big South Tournament Championships as the Highlanders found themselves in a tournament championship game for the first time since 2008. Radford University’s path to the championship game came with, of course, two three-point victories and two defensive stops.

Radford University’s defense forced a turnover with seconds remaining for a 54-51 quarterfinal win over Gardner-Webb. In a 53-50 decision over Charleston Southern in the semifinals, Worthy blocked a game-tying 3-pointer.

The two wins sent Radford University into a championship game matchup with the defending tournament champions in UNC-Asheville. The two foes previously played a single and double overtime contest in the regular season.

Radford University jumped out to an early lead and led for 37:06, before going cold in the final five minutes of the game as UNC-Asheville went on an 8-0 run to take a 49-48 lead with less than five seconds remaining.

After Highlanders’ timeout, Walker got the ball at the top of the key and drove the right side of the lane. Her shot was blocked and the ball went to White on the other side of the basket, but her attempt as the buzzer sounded missed short off the glass.

Heartbroken is the only word to describe that feeling, but determination will be the word heading into the upcoming season.

“The entire 2016-17 season along with the Big South Regular Season Championship will only motivate us to prepare with even more detail and focus on the upcoming season,” McGuire said.

Going by the team motto, “All Gas, No Brake,” Radford University fans will be in store for another thrilling ride starting in November.