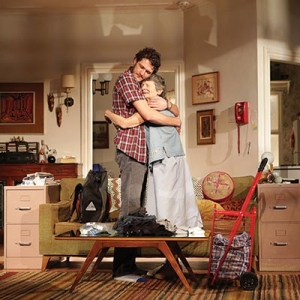 The theatrical world of Faye Armon-Troncoso '95. 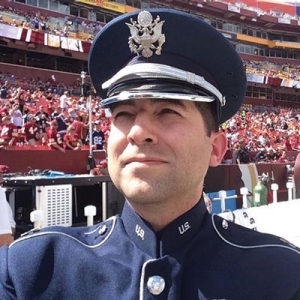 Dan Boothe '06 is the assistant director of operations and associate conductor of the U.S. Air Force Band. 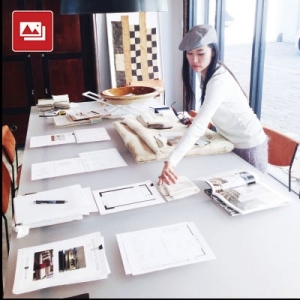 Pum Lefebure is the cofounder of the highly prestigious Design Army. 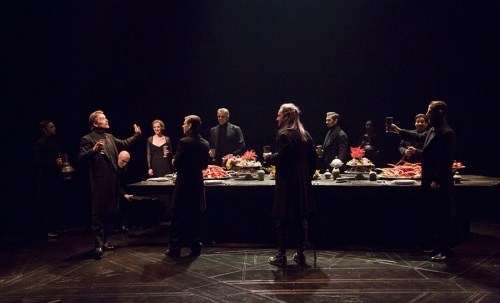 The interior was white. The couch was white. Even the actress wore white. Then she was shot and there was red, as she lay in a pool of blood.

The next day, the audience of the play “Stunning” saw the perfectly white set with no residue of bloodstains, until again, the actress was shot and the cycle continued day after day at the Duke Theatre in New York.

The blood was actually a flexible resin and paint combination created by prop designer Faye Armon- Troncoso ’95. Making non-messy blood is part of what the Radford University theatre alumna does now in her job. She creates effects that are manageable and believable onstage. This includes providing any object or furniture for a play that an actor touches during the course of the show. Much like an unseen magician, Armon-Troncoso is responsible for creating a suspension of disbelief and much of this magic happens on Broadway.

For instance, there was the table setting for “Macbeth” at the Vivian Beaumont Theatre. In one scene, the floor became an empty table, which was lowered below the stage by an elevator. Within 30 seconds it was set with dishware before ascending back onstage.

The set designer chose a setting from pictures Armon-Troncoso provided. It turned out all the dishes in the photo were made of chocolate for a museum exhibition.

“So we got the chocolate molds from Australia and were able to make light-weight plastic versions of all the silverware and dishware, so it would all be unbreakable,” she said.

This way, in the limited space they had to work with beneath the stage, they were able to set the props on another tabletop, which slid onto the table before it was raised.

For Armon-Troncoso, it is all about creating a believable environment, which she does by considering each characters’ personalities and actors’ traits. To do so, she delves into her past at Radford University as an acting major, when she studied with former theatre professor Jerry McGlown.

“He was so instrumental in helping me act, in teaching me the guidelines and how to do it, that I am able to breakdown these props and environments and really dive deep into the characters,” she said.

She also credits two current faculty members. Carl Lefko, director of the School of Dance and Theatre, taught her about set construction, and Monica Weinzapfel, theatre professor, gave her a taste of costume design. 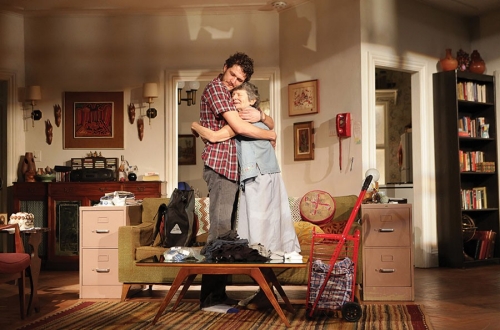 First she went to New York to try her hand at acting and found some success with a few off-off-Broadway shows and tours. Then she tried a full-time job in theatre starting at a Broadway press agency. This led her to the Cherry Lane Theatre, where she worked as a ticket taker. Moving up, she soon became the house manager and finally assistant manager of the theatre.

But then one day she noticed the properties assistant in the theatre.

“I remember thinking, I kind of want to do that — run around, be involved and make stuff,” Armon-Troncoso said.

With this desire, the theatre allowed her to try her hand at props and she found the challenges interesting. Soon she was designing and creating props for off-Broadway.

This is where her story takes off. She did props for a show called “Bug” at the Barrow Street Theatre. In this, the main character rages war on insects.

“I got all these repellents, gallon jugs and chemicals and made everything look like if a match were lit in this room, it would blow up,” she said. And eventually in the show, the room did explode.

For this work in 2004, she was the first person to win an Off-Broadway Theater Award (Obie) for props. Since then, only one other person has won an Obie for props.

This fueled her desire to stay in the business and start her own studio. She has since branched out with production design to film and television, including “The Tums Quarter-time Show” that ran during the 2017 Super Bowl on the internet.

For Armon-Troncoso, it is all about making the artificial believable.

Highlights of Faye's career on Broadway 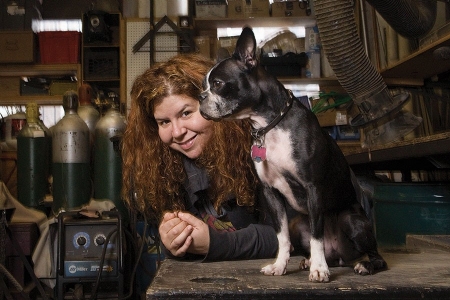 Faye Armon-Troncoso ’95 and her dog Bella at Faye’s prop studio. 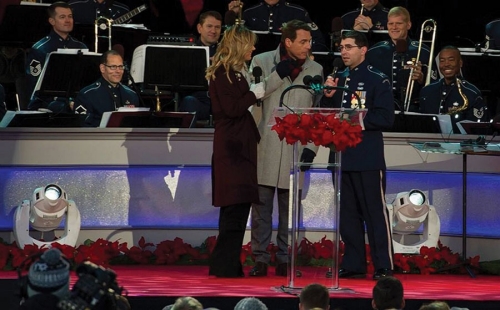 Dan Boothe ’06, the assistant director of operations and associate conductor of the premier U.S. Air Force Band in Washington, D.C., right, is interviewed at the Lighting of the National Christmas Tree Celebration.

On the plane, he stood in salute along with the other airmen during a dignified transfer at Dover Air Force Base in Delaware. As he watched a transfer case of a fallen soldier lowered from the plane, without seeing them, he heard the desolation of the bereaved family.

Using this moment, the assistant director of operations and associate conductor of the premier U.S. Air Force Band in Washington, D.C., drew the inspiration needed to compose “Music for a Dignified Transfer.” Voluntarily written in 2014 for Air Force Mortuary Affairs, it is the custom music for videos each family receives to document the dignified transfer of their fallen loved one.

“The music I wrote grew out of my own need to process that experience,” Boothe said. When he thought about this, he connected to the loss already experienced by so many others.

During his deployment in Afghanistan, he continued to create and perform his music.

“The only difference was, sometimes we had to dive for cover, literally, in the middle of a song because the Taliban would shoot mortars toward our position,” he said.

Though his unit dealt with 110-degree sand-blown days, lived in tents and small trailers and missed their families, they knew they had to adapt to deployment.

For Boothe, this meant meeting the local musicians.

“They invited our musicians to join them in a small community house where they shared food, stories and, of course, music,” Boothe reminisced, “We all brought some handheld instruments and they had theirs. Together everyone just jammed and shared different musical bits … looking for ways that we might add to one another so we could create one ensemble.”

As with this example, Boothe can make the most out of a situation, crediting some of this ability to his time as a music major at Radford University.

“At Radford, I learned the value of making the most of what you have,” he said.

Encouraged to tap into faculty experience, students studied under a range of musicians who had trained at Yale or performed with Leonard Bernstein.

“Radford University challenged me academically while also championing my core identity as an artist and music student,” he continued.

He shared this recognition with recipients from schools such as Yale, Princeton and Harvard. With the combination of opportunity and challenge Radford University provided, Boothe competed academically while standing out artistically.

During the 2016 holidays, he conducted the U.S. Air Force Airmen of Note jazz band on the Hallmark Channel’s Lighting of the National Christmas Tree Celebration. He worked with celebrities such as James Taylor, Marc Anthony, Garth Brooks and Kelly Clarkson. But then he found himself in a unique position onstage with the 44th U.S. President, Barack Obama.

“Is the band ready?” the president asked Boothe.

Boothe gave him the thumbs-up and his band began the holiday classic “Jingle Bells.”

As this magazine is published, Boothe has left the military for a new position as music director for Symphonicity, the symphony orchestra of Virginia Beach. They selected him after holding a two-year competitive international search. His first season as Symphonicity’s maestro begins in October 2017. 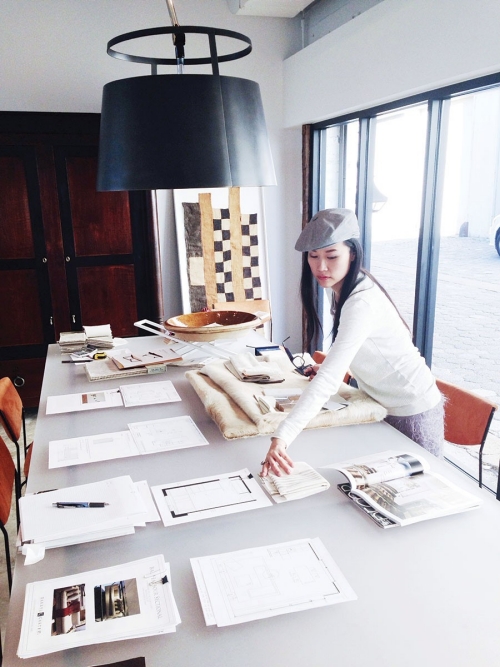 The clock on the computer screen read 3 a.m., but Pum Lefebure, a student designer with University Relations, was so absorbed in her project she was unaware of the hour. As she worked, however, the dirt on her computer screen began to bother her so she decided to do something about it.

She reached for screen cleaner and sprayed the offending surface. Then she used a paper towel to dry it. Then paper stuck to the surface.

Puzzled and panicked, she looked at the cleaner and discovered she had sprayed the screen with spray mount adhesive.

There are people who would have walked away from such disasters, but not Lefebure. She spent the next two hours peeling away the paper and polishing the surface of the screen so no one would ever know. And she kept this secret until now.

Her drive and diligence seen in both working late — not because she had to but because she wanted to — along with her problem-solving abilities, has propelled Lefebure into being a serious force in the design world. She is the co-founder of the highly prestigious Design Army, which she started with her husband Jake.

Located in Washington, D.C., Design Army is an award-winning, internationally recognized design firm often featured in publications such as How Magazine, Forbes and Adweek. Lefebure was a speaker at Cannes Lions and HOW Design Live 2017, two of the largest annual gatherings of creative professionals in the world.

But before all this, she was an international student at Radford University. Lefebure came to Radford after a campus visit while a high school foreign exchange student in Virginia Beach. Her teachers encouraged her to stay in the U.S. to study graphic design, which she chose instead of art because it seemed more lucrative.

Radford’s campus was a change of environment for her, a place where she could hear herself breathe. The loudness, the distractions and the shopping she had known growing up in Bangkok, Thailand, were gone.

“The campus is really different from any other campus in Virginia,” Lefebure said. “It’s really small and quiet and there is all this opportunity for students to work on campus. Students can get scholarships. Being a foreign exchange student, I wanted to offset the cost to my parents.”

To do this, she made a fateful decision to work with University Relations. Along with the skills she learned in graphic design classes, she credits this employment experience as providing her with a real world point of view. She pitched ideas and designed the University’s view book.

“I remember Pum’s time in Creative Services like it was yesterday,” said James Harman, art director for University Relations, who worked with Lefebure at the time. “She was extremely goal-focused, exceptionally hardworking and very professional, with a great sense of humor.”

And though she excelled in this position and her classes, she knew she had to work three times harder than she had while in Bangkok. As an international student with an American dream to stay in the country as a graphic designer, she would compete against hundreds of other students from prestigious design schools to be not only hired but sponsored by a company.

If you want something, you have to work hard for it."

When another firm bought Supon, the two decided to go in another direction and started Design Army. Now they maintain a balance of being an international company with clients such as Ritz Carlton and the Academy Awards with being a boutique firm for local businesses.

Lefebure manages this with her impeccable style, making success look easy. But it is not. It is her drive, the same determination she had while working as a student designer to excel beyond excellence, that is the backbone of her personal philosophy.

“If you want something, you have to work hard for it,” she said. “It is not just going to come to you. Life is short, and I don’t want to be lazy.”