The Mayor of RUC

Every day, Glen Mayhew, D.H.Sc., associate dean for the Waldron College of Health and Human Services, goes out to the third-floor lobby at Radford University Carilion (RUC) to greet students, faculty and staff as they arrive or leave the building. Mayhew enjoys giving tours of RUC, and when he has time, he ventures to the top floor of the 10-story building and works his way down, saying hello to everyone and seeing if there is anything that he can do to help them. 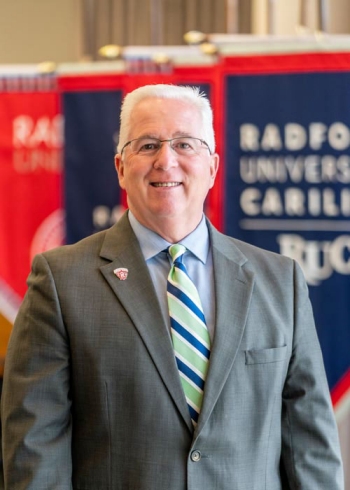 It’s that kind of hands-on, personable leadership that has earned Mayhew the nickname “the Mayor of RUC.”

“I am a true believer that a smile and small gesture can go a long way helping make someone else’s day better,” Mayhew says. “It also supports the culture we have here at RUC of having an engaging and family-like atmosphere.”

Mayhew can trace his association with the college all the way back to 1985, when he enrolled in the first cohort of the Associate of Science in emergency health sciences program at what was then known as the Community Hospital of Roanoke Valley College of Health Sciences. He graduated two years later and was hired as the lab coordinator for the emergency services and nursing programs.

“I worked for Roanoke Emergency Services at night and at the college during the day,” Mayhew recalls. “When you’re in your 20s, you can burn the candle from both ends.”

He was given the opportunity to assist with the teaching of some of the lab sections and enjoyed engaging with the students and seeing the lightbulb go off when they were able to learn a new skill or understand a new concept.

The director of the emergency services program, the late Claudia Huddleston, started giving Mayhew more opportunities to teach and started encouraging him to return to school and complete a bachelor’s degree.

“I listened to her advice and completed a Bachelor of Arts majoring in healthcare administration,” Mayhew said.

During that time, I realized how much I enjoyed teaching and seeing my students succeed.”

Mayhew said he vividly remembers one student who was ready to quit paramedic school because he could not understand how to read EKGs. He says he knew the student had what it took to be a good medic.

“We worked hours and hours after classes until he got it,” Mayhew says.

“He’s had a very successful career as a captain in a fire/EMS system, and that makes me proud to have been part of his success.”

As his passion for teaching grew, Mayhew went back to school again and completed a Master of Science in education, followed soon thereafter by a Doctor of Health Sciences.

He continued to progress through the academic ranks, leading the development of the bachelor-level emergency services program – “the first of its type in Virginia and one of only about a dozen in the country” – eventually becoming dean of institutional effectiveness at what was then the Jefferson College of Health Sciences (JCHS).

It was during this period that Mayhew got the nickname that has endured to this day.

“I used to tag along with JCHS President Nathaniel L. (NL) Bishop on some of his many college tours and public engagements, or represent the college when he wasn’t available,” Mayhew says. “In one of our leadership meetings, Margie Vest made the comment about NL being the president, but Glen is the mayor, and it stuck.”

Mayhew says it is Bishop whom he credits for helping him hone his persona as an involved and caring leader.

“It wasn’t until later in my career that I worked for NL, and he was a leader that everyone could relate to,” Mayhew says. “He was the consummate ‘people person’ and observing his level of engagement taught me that every person has responsibilities, and no one’s responsibilities are more important than anyone else’s. It takes the whole team pulling in the same direction to make it work like a well-oiled machine.”

In 2019, as JCHS merged into the family of colleges and schools at Radford University, Mayhew would once again move into a new role. As associate dean, he advocates for all the academic programs housed within the college, including most of the healthcare-focused programs offered at RUC. He splits his time between RUC in Roanoke and the main campus in Radford.

“I love coming to work every day and being around people that have a common calling,” he says, smiling. “I want to make sure that I am doing my part to help make sure that our students, faculty and staff have what they need to be successful. That starts with a personal touch.”