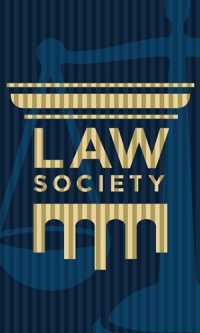 It’s estimated that about 160 of Radford University’s graduates have gone on to careers in law, but a trio of faculty members recently banded together to potentially raise that number.

In a move to meet students’ rising interest in legal studies, and to enhance undergraduate options for entering into that field, those instructors recently launched a three-pronged initiative — to create for the school a competitive mock trial team; to reimagine and expand the existing pre-law society; and to offer undergraduates the option of minoring in legal studies, possibly as soon as this fall.

“I don’t know that one person could have orchestrated this,” said College of Humanities and Behavioral Sciences Dean Matthew Smith, Ph.D.

“Don moved to the area, Allyson joined the faculty and Carter started making connections, and it just seemed like the planets lined up one by one,” Smith explained. “As I was having conversations with each of them, there was this realization that, hey, there’s something bigger that can happen, given the dynamism of what everyone’s working on.” 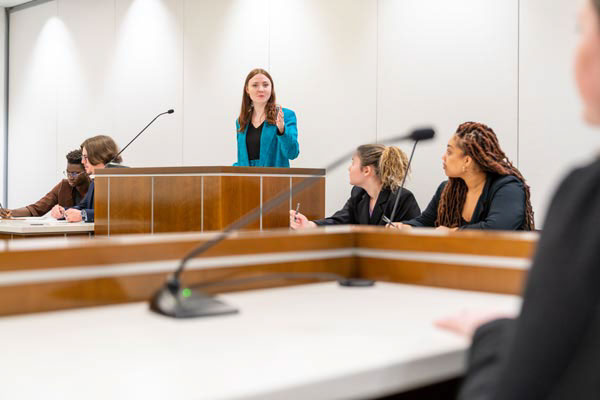 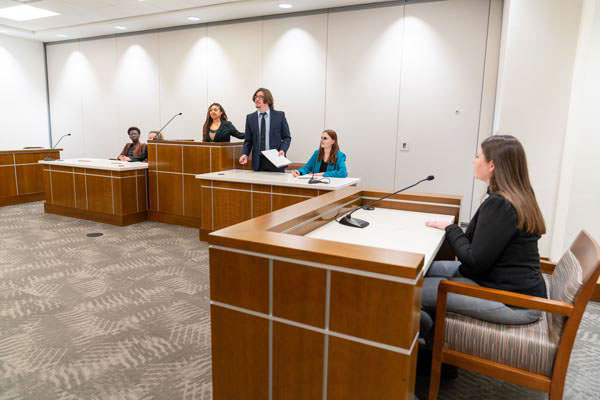 In crafting the legal studies minor, Yankle wrote in her statement of purpose that it’s designed to emphasize the skills necessary for success in law school while also allowing students to explore specific areas of the law and its related topics. The minor is currently moving through the approval process and, as of early March, was set to go before the Faculty Senate for consideration.

More than two dozen academic departments have already agreed to participate in the minor, which Smith said will give it “an on-ramp in 28 different places. So, a student who’s in nursing can make the connection that they could get a legal studies minor.”

As it’s structured, legal studies will require 18 credit hours. Its three core classes will draw from English, philosophy and religious studies to help students improve their logical reasoning and writing skills; other departments offer courses on topics such as the judicial system, policy and regulations.

“When you go to law school, it doesn’t matter if you’ve taken Constitutional Law or Rights of the Criminally Accused,” Yankle explained. “What matters is: Do you have logical skills? Do you have reasoning skills? Do you have writing skills? And so that was the approach that we took when doing this minor, and that’s also been what makes it unique for the entire state.” 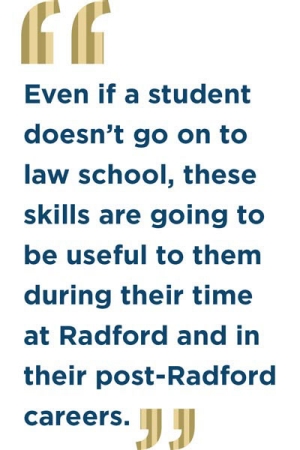 The second component of the current initiatives is a new competitive mock trial team launched by Don Martin, a former corporate litigator and government counsel who joined the faculty last year.

Radford University already offers classes covering mock trial in which students learn trial skills, write briefs using actual cases and argue rules of evidence. Martin’s competitive team will be based out of the mock trial class, and it will participate in tournaments sponsored by the American Mock Trial Association.

The current group, which has about 10 members, stalled at the regional level this season, but all new teams have to start somewhere.

“They’re all rookies and green, and no one on the team has ever done this before,” said Martin, who previously coached mock trial teams for American University and the University of Richmond.

Students on the new team, meanwhile, praised their experiences.
“Coming to Radford my freshman year, I knew I loved the courtroom setting, and I found that mock trial was a way to get into that setting and see all that goes into trial prep,” said Emmie Maurer, a sophomore from Mount Airy, North Carolina, who majors in political science with a minor in criminal justice.

Catherine Plaster, a senior from Tazewell County, is currently applying to law schools and hopes to ultimately become a prosecutor.

“The opportunity to participate in mock trial helped to confirm that I am on the right path,” Plaster said.

The third of the new initiatives is the reconfiguring of Radford University’s Prelaw Society.

Founded in 2016, its goal is to educate students on law professions, support those who want to study it beyond the undergraduate level and enhance the overall diversity of members within the profession. Now rebranded as the Radford University Law Society, this new version will also be open to alumni working in law. 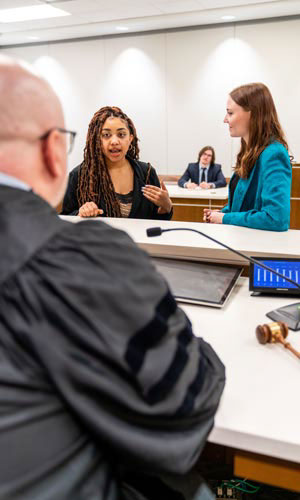 I started to realize that we had all these alumni out there who have law degrees, who really feel loyal to Radford and want to support it, and it felt like we needed to have a home for them,” Carter Turner said.
Keith Hurley ’79 worked for the Virginia State Police and the governor’s security detail before pivoting to law school. In 2013, he was appointed to a General District Court judgeship. He also teaches in the criminal justice department at Virginia Commonwealth University and is a recent addition to Radford’s Law Society.

Hurley’s advice to students: “Make sure it’s what you want to do. Go watch court, go talk to the judges or lawyers. That’s where the Law Society would probably be of benefit to students.”

“Try to diversify your background. Because that’s what law schools look for, is the diversity and your experience. I think my work with the state police helped me get in,” he said.

Another Law Society member, Chris Huther ’88, cautioned aspiring lawyers that, while the profession is extremely rewarding, they need to be fully aware of what they’re getting into.

“A mock trial program provides helpful insight into what the practice of law is like,” said Huther, a Washington, D.C., attorney who specializes in communications-based litigation. “Television and the movies give you an incomplete understanding of the practice of law, day in and day out. You might spend 2,000 hours getting ready for a trial that lasts a week.

“The more that we can do as an institution to expose our students to the commitment that’s required and the opportunities that are available, the more prepared our students will be to succeed in the study and practice of law.”

Turner hopes that as the society grows, more alumni will get involved.
“A lot of them really like that idea, just the opportunity to come back to campus or visit virtually and connect with our students again,” he explained. “You can have guest speakers in front of your students, but when those speakers have been students here themselves, they’re received differently.”

A recent example of that came Feb. 21, with an on-campus question-and-answer session called “So You Want to Be a Lawyer,” led by Drew Robinson ‘01, a former prosecutor who now works as a private attorney in Fairfax.

About 40 students showed up for the talk, and for the better part of an hour, they kept Robinson busy.

One of those on hand was sophomore Sydney Brummitt, a political science major from Rocky Mount, Virginia. After the session, Brummitt said current events and her involvement in the Model United Nations had recently increased her interest in global affairs.

“I want to study international law and, maybe, in the future, own my own law firm,” she said. “I’m actually the president of the Model UN club right now, so I’m really interested in what’s going on in other countries.

“I want to do more than just advocate for civil rights,” Brummitt declared. “I want to get people justice.”