A Pipeline for Blood

“Imagine you’re lying on an operating table with your chest cavity open.” 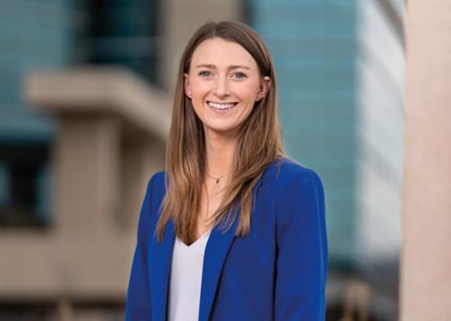 That’s Tracey Dudding’s jolting opening sentence as she began to explain the importance of the capstone project she’s been working on almost every day for a year and a half.

“You realize you’ve had a heart attack,” she continued in a dramatic tone, “and you need blood to stay alive. The hospital doesn’t know the exact blood inventory they have.

“And then, they realize they don’t have the right blood for you. What will they do?”

Dudding’s analogy is alarming, but it properly conveys the importance for hospitals and medical facilities to maintain consistent working knowledge of their precise, up-to-date blood inventory at a moment’s notice, an inventory that goes well beyond a manually maintained spreadsheet.

It’s information and knowledge that could make a difference between life and death.

Dudding developed an interest in the healthcare field a few years ago as a junior undergraduate student majoring in statistics at Virginia Tech. It was then that three of her close family members suffered heart attacks in four months.

“One of them had open-heart surgery,” recalled Dudding, who is in her second year of Radford’s Data and Information Management (DAIM) program. “So, that definitely got me interested in healthcare and helping others in ways that I could.”

She chose those last five words carefully – “in ways that I could” – because, as she explained it, she is somewhat limited in her abilities to help.

“I actually pass out at the sight of blood,” Dudding sheepishly admitted.

“It’s happened to me about three times.”

But still, “I wanted to find a way to make a difference,” she said.

When Dudding first came to Radford and enrolled in DAIM – a program that prepares graduates for leadership roles as data engineers, data architects, information managers, senior database administrators and other data management positions – faculty members presented her with the idea of working on a project with Carilion Clinic in Roanoke to improve inventory management at the Roanoke Blood Bank and identify factors associated with blood utilization to help manage the blood inventory more effectively and efficiently.

It was a challenging and rewarding opportunity for Dudding as she explored ideas to employ her skills and talents in a meaningful and critical endeavor.

In the beginning, Dudding quickly learned about some vital statistics involving blood inventories around the United States. One was from the American Association of Blood Banks (AABB), which estimated that in 2013, 932,000 whole blood units were wasted due to expiration.
“Blood is an extremely precious resource that only comes from donors, and once the blood is drawn, it may only be used for 30 days,” explained Professor and DAIM Graduate Coordinator Jeff Pittges, Ph.D., Dudding’s faculty mentor. “Plus, blood is stored frozen, and when it is thawed, it must be used within 60 minutes.”

Another statistic Dudding found revealed that only 38% of people in the United States meet the criteria to donate blood, and out of that group about 10% do donate.

So, for her capstone, “the ultimate idea was to find ways to reduce blood waste,” Dudding said.

To do so, variables needed to be identified to be used in predictive modeling. That information can lead to more effective inventory communication through inventory reports, dashboards and automated alerts, all of which can reduce waste and improve how blood is utilized. 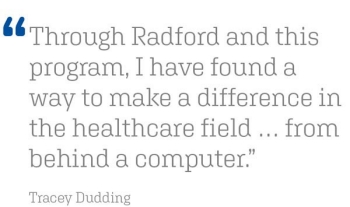 Dudding talked with professionals at Carilion and the Roanoke Blood Bank to assess their needs – the information and the need and how often they need to see it – and quickly began building a “pipeline,” she said, for an inventory management system.

“Surgeons and other healthcare workers need accurate and timely information on the blood supply to make good decisions,” Pittges explained, “especially if we have a crisis, like a shooting or a multi-car accident on the highway.”

Once completed, Dudding’s system could vastly improve the ways blood inventories are communicated.

“It will ensure data quality and improve data access by removing manual steps in the current process that may produce errors,” Pittges said, “integrating data from multiple sources to provide a complete view of blood inventory, and producing a dashboard and live reports with multiple updates throughout the day.”

Dudding’s prototype is scheduled to be finished by late April or early May, right in time for her graduation from the program and securing employment in the healthcare field.

“Hopefully, I will end up working at Carilion,” the Pembroke, Virginia, native said. “I was born and raised locally, and I would love to work there and make a contribution working in data engineering and statistics.

“Blood makes me squeamish,” she continued with a smile, “but through Radford and this program, I have found a way to make a difference in the healthcare field … from behind a computer.”