Return of the Bobcat

The grocery store. The bank. The gas station. Even the dentist’s office. It doesn’t matter where Darris Nichols goes in the city of Radford, it’s inevitable he’s going to know someone there. 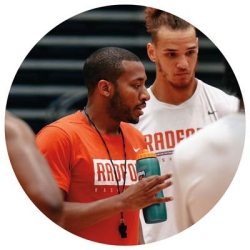 Born in May 1986 to parents Donna and William Nichols, Darris quickly became a beloved member of the community. He attended McHarg Elementary School, Belle Heth Elementary School, John Dalton Intermediate School and then Radford High School, with his love of basketball growing by the day.

As a Bobcat, he became a household name thanks to a stellar career on the hardwood. Nichols was a standout point guard on the Radford High School boys’ basketball team, leading the Bobcats to four appearances in the Group A tournament, and was named the 2004 Timesland Boys Basketball Player of the Year.

Nichols was so good, in fact, that he was recruited by Jon Beilein to play college basketball at West Virginia. He made the decision to commit and become a Mountaineer, beginning a 17-year journey away from the only place he had ever called home.

A four-year letter winner playing under Beilein, and later Bob Huggins, Nichols scored 993 points and 399 assists in his career. He shot a tremendous 37.5% from three-point range in his time in Morgantown, helping WVU reach the NCAA tournament three times to join the ranks of the Top Five winningest players in program history. He also played disciplined basketball unlike any other player, setting the record for most career games without fouling out in NCAA history.

Although his professional career was cut short due to a knee injury that was sustained in his one year playing for Atomerömü SE in Turkey, it opened the door for his coaching career to officially begin.

Nichols returned to his alma mater to serve as a graduate assistant for the Mountaineers during the 2010-11 season and then landed his first full-time job as an assistant coach at Northern Kentucky.

His impact as a voice on the bench was immediate, helping the Norse go 23-7 in his very first year. The team transitioned from Division II to Division I for the 2012-13 season but still found success in the Atlantic Sun Conference with Nichols’ guiding hand on the wheel.

From there, he spent one year at Wofford College and became a crucial part of a Terrier squad that won 20 games and the Southern Conference Tournament championship en route to an NCAA Tournament berth. 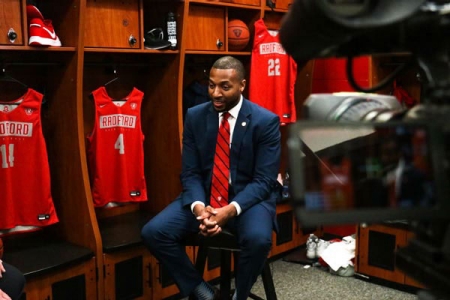 His talent as a coach was on full display, leading to one year at Louisiana Tech and eventually his hiring by the Florida Gators – one of the nation’s premier basketball powers of the 2000s.

It was no longer just friends and family back home in Radford noticing Nichols, but the entire country. The kid from Southwest Virginia was named to ESPN’s 40 Under 40 list in the summer of 2020, ranking as the 17th-best collegiate coach under 40 years of age in the United States.

Year after year of winning and accolades at Florida put Nichols squarely at the top of Radford Director of Athletics Robert Lineburg’s list for the Highlanders’ head coaching job when it came open in 2021.

Finally, after many years away from the New River Valley, Nichols had his chance to return home. On April 21, 2021, he was announced as the eighth head men’s basketball coach in the history of Radford University. He was home.

A press conference was held that very same day to introduce Nichols to the Radford University family and reunite him with the place overflowing with lifelong family. Within a week, he had made his first hire – one that was all too fitting.

Darris Nichols would be joined by his older brother, Shane Nichols, who was busy building a coaching legacy of his own that included a close relationship with now-NBA star Ja Morant while at Murray State in Kentucky.

In the same vein as his brother, Shane had become a pillar of the New River Valley basketball community thanks to a stellar career at Radford High School. He scored 1,903 points in his career as a Bobcat, being named a two-time All-Timesland First Team member as well as a two-time All-Group A First Team pick.

The duo was inducted into the Radford High School Hall of Fame in October 2021 and are now side by side as they lead the Radford University squad together for the very first time.

With roots as deep as Darris has grown in the area, it’s hard to imagine there are even more people in Radford with whom he can connect. But who knows, maybe a new friendly face and fan will stop him to say hello next time he goes shopping for groceries.