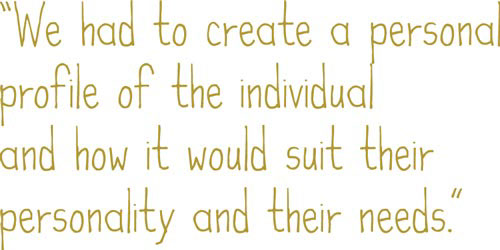 Picture a young woman from Michigan, college-aged, on the cusp of 20. Her name is Madeline Smith, and she’s ordinary in almost every way, except that she has no home. 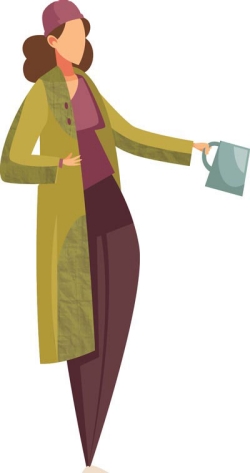 But while it’s estimated that just over a half million people in the United States are unhoused, Smith can’t actually be counted among them. She is, in fact, a symbol, a hypothetical figure devised by a group of interior design majors who are using their skills to create dwellings for those who have no place to live.

For students in Radford University’s Design 205 class, homelessness is their semester-long theme.

Earlier this year, they were split into four groups of four and assigned to fabricate inexpensive shelters that could be assembled and used by someone who is unhoused.

“Your shelter must be habitable, portable, resistant to moisture and cold, provide light and ventilation to the interior and be aesthetically pleasing,” the rules explained. “Understanding a homeless person’s point of view and lifestyle will be your challenge this semester. These individuals are in a crisis situation.”

The first step they took to that end was to humanize the shelters’ virtual recipients, and that’s how Madeline Smith came about.

“We had to create the personal profile of the individual and how they would use the shelter, and how it would suit their personality and their needs,” said Lora Ellen Robinson, a sophomore from Hillsville, Virginia, who’s majoring in interior design while minoring in biology and entrepreneurship.

They picked Michigan as Smith’s home state and conceived their design with an eye toward that specific climate. They also based Smith’s physical description on state averages – she would stand about 5 feet 7 inches, statistics determined – and they sized their structure accordingly.

Robinson said the professor, Joan Dickinson, Ph.D., “wanted us to spend the least amount of money that we could and really use resources that we had, rather than going out and buying them, as if we were in their position. We went to Goodwill and thrifted a lot of it.”

A found window frame was repurposed as their shelter’s doorway. Part of a shower curtain formed a window. They managed to scrounge some scrap wood. The only piece of the puzzle they actually had to purchase was an inexpensive tarp they got at Walmart.

The construction of their shelter – which measured approximately 3 feet in width and 6 feet in both length and height – took roughly four days and marked the group’s biggest challenge.

“We’re designers. None of us had ever built anything before. So that was hard, trying to figure out how to put it together and how to actually build it to make our design come to life,” Robinson said. 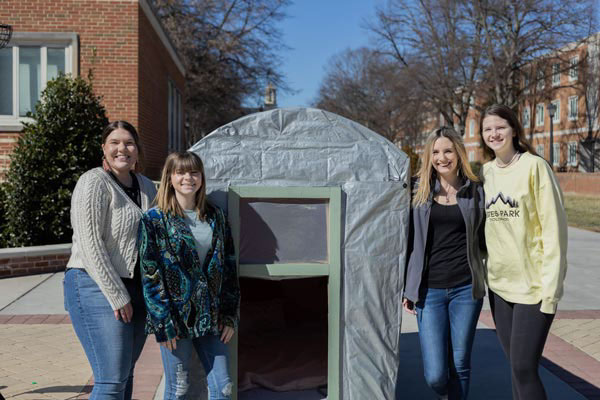 Members of the Design 205 class with their shelter from left to right: Hannah Ferris, Raella Papers, Lora Ellen Robinson, and Grace Sale.

Their plans for the interior were somewhat personal: As their profile figure was a woman their age, they were essentially making the shelter they would want, were they to find themselves in her circumstances, and they outfitted it with pastel walls, a hanging plant and a fluffy blanket.

When they had to define the concept for their shelter, Robinson said, “Ours was ‘a warm hug,’ because a hug makes you feel comforted and protected.”

The three other groups in the class built their shelters for different imaginary occupants and to accommodate different climates – one was designed for Hawaii, two others for Washington state. They, too, utilized tarps and wooden frames but also incorporated foam rubber, PVC pipes and even particle board cubbyholes.

During the four weeks they spent working on the project, students were also asked to read journalist Barbara Ehrenreich’s 2001 book “Nickel and Dimed,” about some of the issues low-income workers face, particularly the hidden costs of establishing and keeping a residence. They also watched a Netflix miniseries, “The Maid,” based on a memoir by Stephanie Land, which dramatizes the obstacles Land once faced trying to live paycheck to paycheck.

Once the shelter projects were complete, in February, the students assembled them outside Hurlburt Student Center and used their work to attract donations from passersby. Over the course of about two hours, the four teams raised more than $500 for To Our House, a New River Community Action program that helps homeless adults find housing during winter.

Three of the shelters were on display on different floors of McConnell Library in early March. The one Robinson’s team created is hosted in Stuart Hall.

“We’re information gathering, creating a process packet like we did for the last one,” Robinson said. “Then, we’re going to actually create a model of the prototype building itself. It’s going to take the rest of the semester.”