Cindy Chace ’86 had a rewarding career with United Parcel Service (UPS) and was afforded many opportunities for growth at a company that saw very few women when she started. 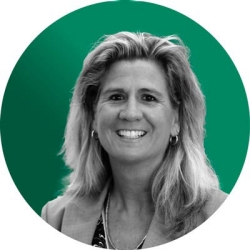 She began her UPS career unloading 18-wheelers during the 3 a.m. to 8 a.m. shift in an environment where her male co-workers didn’t think she would make it. But she did, and UPS saw her drive and potential. The company continued to groom her and promote her, and after 33 years, Chace retired from UPS in 2019 as the director of sales - government sector, a sector that she had a hand in developing and building.

Before all that, Chace was recruited to Radford University to play women’s varsity basketball. During her student-athlete career, she experienced a few changes in the program’s structure and leadership. The Highlanders transitioned from NCAA Division II to Division I athletics, and of course, that meant a whole new ball game in terms of recruiting. Teamwork is ingrained in Chace’s DNA, so when changes impacted her position on the team, she re-evaluated her role and embraced the opportunity to lead from a different place on the team.

“I was no longer going to be a senior with additional playing time during my last season, but the coach wanted me to help get the new freshman and another teammate integrated as starters,” said Chace. “It was a humbling experience that taught me a lot about leadership.”

While it was difficult to take this step back, especially as a senior, Chace took the opportunity to step forward as a mentor and leader. As she progressed in her career, being a good leader was important to her. 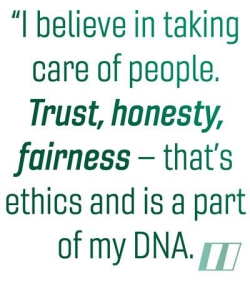 “I grew up in a military family … my father was a marine,” Chace shared. “When I was moving through the ranks at UPS, I would ask him, ‘How will I know if I am truly meant to be a leader?’ He told this story about leadership that I still reflect on: When he and his troops would make camp at night, my father would help all of the other marines build their beds. It was important to him to make sure they were taken care of. When the last bed was made, he would go to make his own bed. When he would get to his camp, his bed would already be made. My father said, ‘A true sign that you are a leader and people will follow you is that they will also take care of you without you asking.’”

As co-founder and president of the Florida-based nonprofit Go for the Greens Foundation, Inc., Chace embeds this philosophy in her leadership style. The 15-year-old foundation is focused on leadership development for women and provides a unique, boutique-style annual conference, sponsored by UPS and Walt Disney World, that brings in guest speakers who have often been the first women and leaders in their fields.
When she returned to Radford University in February 2022 for the first annual “Champion Her Future” leadership dinner, held by Radford Athletics to support female student-athletes through professional and personal development and mentorship, Chace was excited to share her commitment to helping other women network and gain exposure for their talents.

“Part of my giving back to Radford is helping future leaders have exposure to others in leadership,” Chace said as she considered what meeting other successful, career-oriented women would have meant to her when she was starting her career.

She is committed to building the bridges necessary to give others opportunities and supporting the communities that mean so much to her. At Go for the Greens, Chace’s goals are that “teamwork is number one; that everyone is going in the right direction and being heard; and that everyone who is contributing feels that they are contributing.

“I believe in taking care of people. Trust, honesty, fairness – that’s ethics and is a part of my DNA. We’re all different, but everyone has something to contribute to make the world a better place. At the end of the day, I want to know that I made a difference – to society, to someone,” said Chace.