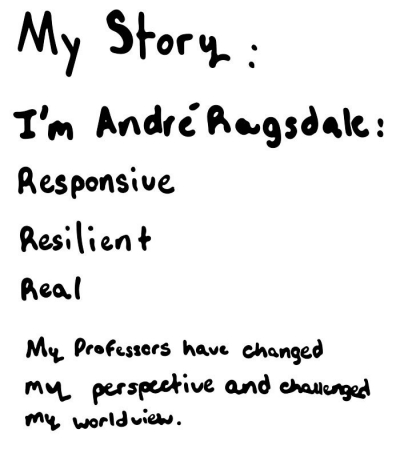 Three years ago, there André Ragsdale sat: a freshman and first-generation student.

Students, faculty and staff stood in lunch lines as they discussed class assignments, budgets and life.

“I remember exactly where I first saw André,” Turk recalled. “He was sitting near the dessert line at a two-person table by himself. He has a sparkle, a smile that makes people gravitate toward him. We knew right away that we wanted to find ways to get him more engaged.”

Ragsdale, now a rising senior, has experienced a dramatic transformation at Radford University, both intellectually and socially.

Now, Turk said, “André shines. With the right encouragement and engagement, he has thrived.”

“I definitely feel like a different person,” he said. “Now, I have the tools to be a successful professional in the real world. The opportunities that Radford has given me greatly impacted my life.”

Ragsdale epitomizes the traits to which so many Highlanders can relate: responsive, resilient and real.

Ragsdale was encouraged early and often to get involved in campus activities.
He listened, and more importantly, he responded.

Through his relationship with Turk and Bond, he discovered the Office of Alumni Relations for which he became a student-worker. He also joined and is now vice president of the RU Ambassadors, a student-alumni engagement organization.

From there, his involvement blossomed.

He joined the Rho Zeta Chapter of Phi Beta Sigma Fraternity, Inc. in spring 2017. A year later, he was elected and now serves as the president of the National Pan-Hellenic Council (NPHC). He formerly served as the NPHC representative to the Student Government Association (SGA) and joined several SGA members and other student representatives at the 2018 and 2019 Advocacy Day in Richmond.

One of his favorite, and most challenging, leadership roles thus far was as a Quest Assistant (QA). Quest is the University’s new student orientation program, and QAs serve as mentors to new students and their families. The role of a QA requires confidence, energy and empathy.

Ragsdale said he is especially proud of that Highlander experience. Pride beams from a Quest branded backpack he still carries around campus.

To help finance his tuition, Ragsdale secured a job as a student supervisor for the University’s Telephone Outreach Program.

In the classroom, Ragsdale is majoring in political science and aspires to one day get involved in politics. He also plans to go to graduate school to pursue a career in higher education.

His Radford University resumé, now rich and varied, will set him apart from others as he enters the professional world.

“I’ve learned interview skills, resumé building, networking and professionalism,” Ragsdale said. “My professors have changed my perspective and challenged my worldview. My involvement has shaped me into a person who wants to better my community and my fellow peers. I’ve definitely had a full college experience.”

And he still has one more year to go. 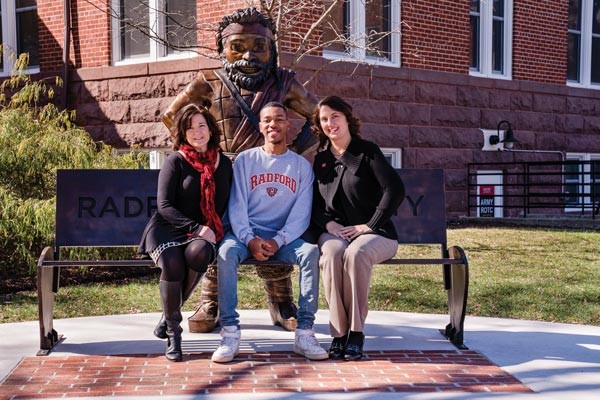 Ragsdale’s path to Radford was unique. He was born in Hopewell, Virginia, and raised by his mother and grandmother. Neither family member attended college, so “choosing the right one was a really big deal for me,” Ragsdale said.

During a tour of Radford University’s campus, Ragsdale’s eyes opened to a world of possibilities. He thought the campus was beautiful, the staff engaging and the small, tight-knit community not too different from his hometown.

He saw himself as a Highlander.

And, Ragsdale responded by enrolling in fall 2016 and starting his journey, as so many first-generation students do, a little lost.

That was until that fateful day when Turk and Bond found him sitting in Dalton. With a little “push” in the right direction, Turk said, Ragsdale opened up and what
came out was a well-rounded student and a genuinely kind and caring young man.

“Since my freshman year, I’ve been growing as a person and as a leader,” Ragsdale said.

Despite Ragsdale’s many accomplishments at Radford University, there have been challenges along the way.

Navigating financial aid, facing social pressures and their consequences, paying bills, juggling job demands with classwork and staying focused on graduation — the ultimate goal — are real struggles  of Ragsdale and all students who immerse themselves in the college experience.

The keys to success in and out of the classroom, Ragsdale said, are being real with yourself and others, overcoming fears and eliminating obstacles.

“That’s what motivated me to do so well each semester,” he said. “It wouldn’t make sense for me to be unsuccessful after I spent all this money and worked so hard. I think some first-generation students don’t understand that there a lot of resources on campus to help them be successful…I try to be that kind of role model for students. I want them to know that they can succeed and have the same opportunities that I had.”

Going into his senior year, he plans to stay just as motivated.

“I know it’s my last year, and I still have to do the work,” he said. “I go into every year strong. I try not to slack off, although it’s bound to happen sometimes. But, I work so hard to make sure I end the semester on a good note.”

Three months ago, there André Ragsdale sat: a Radford University Highlander with a bright future on the horizon.

Seated in his campus apartment, he scanned his surroundings.

“I’m definitely at the peak of my college career,” he said.