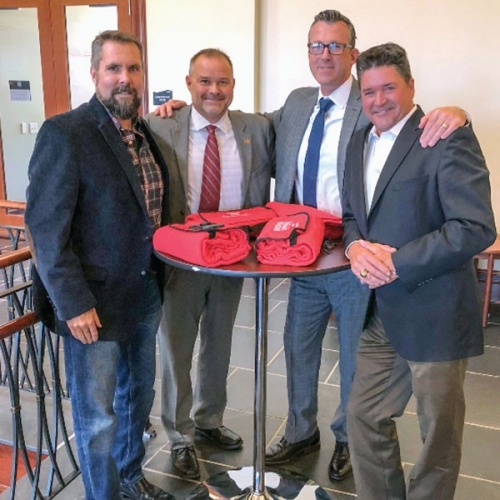 In the late 1980s, Pete Campbell ’92 and Jeff Graves ’89 were among a band of brothers at Radford University who cared deeply about their alma mater and each other.

Many of these brothers — members of the Sigma Phi Epsilon fraternity — joined the military. Others went on to lead successful careers in law enforcement and as first responders, further deepening their commitment to the safety of their communities and the protection of our nation.

Graves and Campbell had parted ways, as many college friends do, upon graduation, but reconnected unexpectedly in early 2018 at a work-related conference in Las Vegas, Nevada. Later that spring, Campbell attended Radford University’s Volunteer Summit, an annual event hosted by the Office of Alumni Relations during which alumni learn of opportunities to become more involved.

“They expressed that one thing we could do was organize together to make a huge impact,” Campbell said. “I knew we had a strong core of brothers and Radford alumni who would support this cause, so that’s what we set out to do.”

Campbell first reached out to his renewed fraternity contact, Graves, who just happened to serve as an officer in the United States Marine Corp (USMC). They recruited Chris Ducey ’95 and Todd Beck ’91 to establish a scholarship committee to honor the service of Radford University graduates and assist with the critical need of helping current students finance their tuition.

“Radford University has a great history of turning out strong military leaders, first responders and law enforcement officers,” Campbell said. “It is definitely something to be celebrated.”
Campbell, Graves, Ducey and Beck were Highlanders and members of Radford’s chapter of Sigma Phi Epsilon three decades ago. The brothers were close, they agreed, and actively engaged in the campus and the community.

Just as Campbell’s Sigma Phi Epsilon brothers once did as Radford University students, they banded together as alumni to support their alma mater.

During Homecoming and Reunion Weekend 2018, the Radford University Honor Committee hosted the inaugural Honor Dinner to introduce the scholarship and garner additional support.

Alumni Col. Kevin Hudson ’90 and Col. Sean Magee ’87, both retired from the Marines, keynoted the special event. The first Honor to Serve Scholarship, to be awarded in fall 2019, is in their names.

“The event was not only successful, but I think it motivated people to reengage. Personally, it brought us back as fraternity brothers,” Graves commented. “At the next Honor Dinner in the fall of 2019, Kevin and Sean will get to meet the first scholarship recipients, who we hope are inspired by their stories,” Campbell said.

Campbell and Graves, who set a fundraising goal of $100,000, are looking forward to seeing the scholarship continue to grow with the help of broad-based and dedicated alumni and supporters who wish to honor our current and future service members.