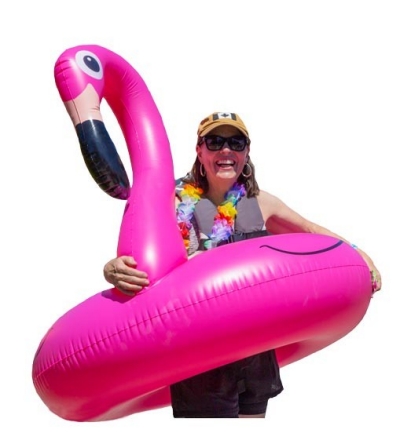 Radford University, nestled in a beautiful scenic location among the foothills of the Appalachian Mountains, offers an immersive educational experience that flows beyond the classroom. The New River, winding 320 miles through North Carolina, Virginia and West Virginia, runs through the City of Radford and can be enjoyed from multiple access points. For one Radford student, time spent on the New River created a defining moment that would lead to impactful activism in his community.

Willie Levenson ’93 chose Radford University for its small town, rural charm and beautiful campus. He grew up in Rockville, Maryland, and Virginia Beach, but said summers in Radford cultivated his love for rivers and influenced his later activism in Portland, Oregon. “I still consider Radford to be home as much as anywhere I have lived. I had to pay for my apartment if I was there or not, so I decided to take a class and experiment with a summer on campus. One summer led to three. My summers centered around swimming at Claytor Lake and Bisset Park and tubing at the New River Junction. From the first time I took a dip in the ‘New,’ I fell in love,” said Levenson.

After graduation, Levenson sought adventure in Boise, Idaho — a city, like Radford, that had a deep connection to its city’s river. After three years in Boise, he moved to Portland, where he was surprised to discover that its citizens had a different relationship and culture around the city’s river. Not only did people not swim in the Willamette River, they made jokes about its water quality.

There was a reason for the negative river culture that developed in Portland. Like many urban rivers, incremental over-industrialization led to severe degradation of water quality. Over time, a collective feeling of hopelessness and disconnection developed.  Billions of dollars were invested and scores of regulations applied over multiple generations to improve the water quality of the Willamette River. However, these positive developments did not change the public’s attitude about the river. Changing Portland’s river culture felt like a battle he could win. Levenson was compelled to take it on.

The Willamette River flows 187 miles, and its watershed is home to two-thirds of Oregon’s population, cutting through Portland and encompassing 4,000 acres within city mits. The Willamette is Portland’s second largest natural area, yet only five percent of this space is accessible at the river’s edge. After years of work, the Willamette River is now again healthy enough to swim in, but there are only a few places to do so.

The Big Float in Portland, Oregon

It’s a gift if you can discover something in life that inspires you. Be courageous in following the thing that moves you."

In 2011, Levenson formed the nonprofit Human Access Project (HAP) with a handful of friends. HAP’s mission is to “Transform Portland’s relationship with the Willamette River.” Its vision is simply “A city in love with its river.” The principal strategies of HAP are to challenge deep-rooted perceptions about the river with facts, create greater access to the river’s edge and develop fun programming to “get people into their river.”

Levenson characterizes HAP as a “grassroots movement disguised as a party,” but with a focus on more than fun. HAP has made a serious impact on changing perceptions and connecting people to their river. It has been instrumental in numerous policy changes, including opening Portland’s first downtown public beach, Poet’s Beach. Beach number two, Audrey McCall Beach, is planned to open this summer.

HAP’s marquee event is The Big Float, which has become a Portland institution. This year’s July 13 Float will be the ninth year of the event, and 7,500 people are anticipated to attend. The Big Float features four bands on two floating stages, beer and wine gardens, food, kid’s activities and more, creating a fun beach party atmosphere, right in the heart of downtown Portland.

“It’s possible to have fun and make a difference,” states Levenson. Other HAP programming includes the Annual Mayoral Swim with Portland’s mayor and the River Hugger Swim team, which enjoys daily summer swims in the Williamette River, thereby making a statement about the safety of the river.