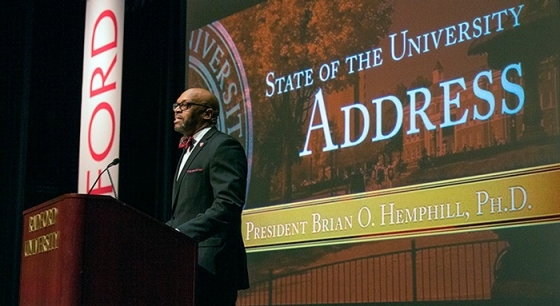 President Hemphill at the inaugural State of the University address.

In his inaugural State of the University address to the students, faculty, staff, alumni and community leaders on Oct. 6, 2017, President Brian O. Hemphill reflected on a successful 2016-17 academic year and looked toward a bright future at Radford University.

“Without question, the state of the University is strong, and our recent progress and resounding success would not be possible without the unwavering support and continued dedication  of our students, faculty, staff and alumni,” Hemphill said.

Special guests Nancy ’73 and Pat Artis were also recognized and thanked for their $5 million gift for student scholarships in the Artis College of Science and Technology, the largest contribution by an individual and an alumnus in Radford’s history. The Artis Endowed Scholarship Fund will award 67 highachieving students scholarships in the amount of $3,000 based on academic eligibility.

As an example of the University’s expanding academic program offerings, Hemphill brought attention to the proposed Doctor of Education and Bachelor of Science in Computer and Cyber Science. These programs are awaiting review and approval by the State Council of Higher Education for Virginia.

“We have truly made great strides, but much more work lies ahead,” Hemphill said.

That work will be defined by the University’s strategic plan, Embracing the Tradition and Envisioning the Future. The plan, which will guide the University’s efforts through 2023, was officially implemented in January.

In fall 2017, the University welcomed 1,848 freshmen, a 5.5 increase over the prior year, including a 22 percent growth in out-of-state students when compared with the prior year.

Without question, the state of the University is strong, and our recent progress and resounding success would not be possible without the unwavering support and continued dedication of our students, faculty, staff and alumni."

Student academic profiles are improving as well, he said. The Class of 2021 had an entering high school grade point average of 3.24, the highest level since 1996, when the University began tracking this information. The class also showed impressive improvements in ACT and SAT scores.

In relation to the University’s enrollment, Hemphill announced the creation of an Enrollment Data Council to utilize predictive analytics and best practices to grow the overall student body to more than 13,000 by 2023.

By 2023, Radford University plans to increase its first-to-second-year retention rate from 75.7 percent to 85 percent and its six-year graduation rate from 58.3 percent to 62 percent, Hemphill announced. Radford’s current minority student population is 28.8 percent of the University’s total student body, representing an increase of 18 percent over the past decade.

Opportunity for student-faculty research is another vital piece of the Radford University experience. To enhance undergraduate research opportunities, Hemphill announced the launch of a new initiative called the Highlander Research Rookies Program.

Beginning with the 2018-19 academic year, 15 apprenticeships will be awarded each year to highachieving and highly motivated freshman and sophomore students who will be paired with faculty members to conduct research. Funding of up to $4,000 will be provided to each awardee.

In conclusion, Hemphill expressed excitement about the upcoming year.

go back to something else