A New Way to Play 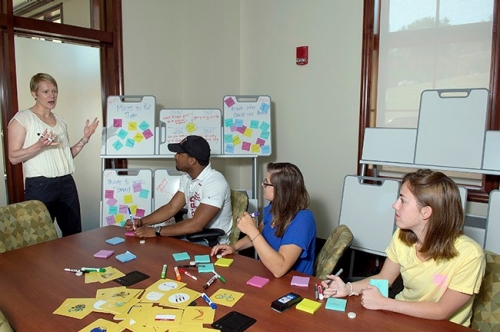 Like many great ideas, this one began with a need. For Jane Machin, the need was a birthday present for her godson, Logan, who has dyslexia.

“I wanted to find a present that celebrated his dyslexia, rather than give a gift that left him feeling inadequate,” said Machin, an assistant marketing professor at Radford University. Her initial idea was to purchase books about famous people who also had the learning disorder, “but there were none,” she said. “Zilch. Zip. Every book about dyslexia was completely academic.”

After interviewing experts and joining the Dyslexia Society, Machin learned more about the strengths and weakness of children with dyslexia in terms of  processing information.

Through all her time and work, Machin discovered an idea that would benefit her godson, who was turning 7 years old, and provide a valuable learning tool for her Marketing 101 class.

“Quite often, our families will get together for game night, and there are certain games Logan can’t fully participate in, at least without feeling stressed,” Machin said. “So, I decided to challenge my students to develop ideas and create board games that rewarded the strengths of a dyslexic child rather than punish their areas of weakness.”

Typically, Machin said, board games put dyslexic children at a disadvantage because of the high level or speed of reading comprehension required to play.

“I thought creating games was a unique opportunity for my students to immerse themselves in the experience of somebody else,” Machin said in describing the process. “When I teach creativity, I tell my students empathy for the person you are trying to solve problems for is highly, highly important.

The first and arguably most important step in the design thinking process, Machin said, is to understand the problem from the perspective of a dyslexic child.

During the fall 2016 semester, Machin challenged her students to create the games, and in November 2016, more than 200 students participated in an Experience Dyslexia simulation, which was aided by a High Impact Practice Classroom Enhancement grant.

Over the course of four hours, three sections of students rotated between two reading, two writing and two listening stations that simulated different characteristics of the dyslexia experience.

Each station had an individual moderator playing the role of teacher, Machin said. Some stations were manned by community members who either had dyslexia or worked with dyslexic children. Logan’s mother and grandmother also helped, as did faculty and students from other campus departments.

Students spent approximately 10 minutes at each station completing the simulation activity and then spent five minutes reflecting on the activity.

“Part of the experience is to feel that emotional threat, the same as a dyslexic person,” Machin said.

I thought creating games was a unique opportunity for my students to immerse themselves in the experience of somebody else. When I teach creativity, I tell my students empathy for the person you are trying to solve problems for is highly, highly important."

After completing all stations, the class came together to share their emotions and learning from the overall experience.

“We talked about it in debriefing sessions and the experience really helped my students understand the threat and it was way of processing and a different way of looking at things,” said Machin, who continues to organize and run the simulations.

Students then worked in class for the next two weeks to develop their games past the prototype stage and into functional games with real materials. The project culminated with a poster session in Kyle Hall.

“They had to do a presentation that stated the title and rules of the game and listed the competitors. They also  had to identify which aspects this was tapping into,” Machin said. “Is it the way dyslexic children look at letters and pictures? Is it the way they can make connections more quickly?”

Faculty and students rated each game according to its creativity and how well it solved the initial problem: giving children with dyslexia an advantage over their friends  and family.

Brianna Collins ’18, a marketing and management double major from Stafford, continues to work on her game, “On Your Mark, Get Set, Go.” She received an Idea Riser grant from the University that is allowing her to build a board game prototype that she will later test with children with dyslexia at a school in Roanoke.

“I want to fight the dyslexia stigma by positioning dyslexic children on a path of success,” Collins said.  “It begins with the empowerment learning approach.  ‘On Your Mark, Get Set, Go’ focuses on strengths of dyslexic children, encourages the best emotional  state for learning and creates a multi-sensory  learning experience.

“Developing this game into an actual product is now a passion of mine, and being able to direct my care and attention toward children battling with the most common learning disability is an opportunity I don’t want to miss.”

Logan was in school when the games were being presented and didn’t get a chance to see the products, “but his mum did and loved them,” Machin said. “She explained the games to Logan, and he was super flattered that a class was working on games specifically for him and people  like him.”