Making Connections and Supporting the Future 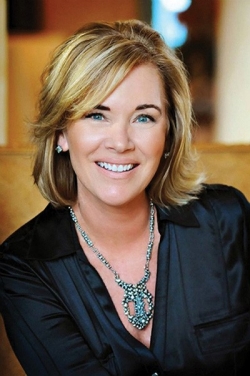 When Pam Cowan Sowder ’79 walked Radford University’s campus on her first day of classes in the fall of 1977, she made sure she greeted everyone she passed. The previously shy Cave Spring native knew that she could be whom she was meant to be, and that journey began at Radford. “It was the most profound thing for me — I was extremely shy. When you live in the small town of Cave Spring, you’re in a bubble. The first day at Radford, I realized that I don’t have to be shy anymore,” said Sowder, who was the first in her family to attend college.

Sowder is chief networking officer for It Works!®, a global $750 million company that she and her business partners Mark and Cindy Pentecost created in 2001. Now, Sowder travels the world creating and strengthening connections with her 100,000 independent distributors, giving hands-on training and support and sharing her excitement for the company’s products — including its original and best-selling Ultimate Body Applicator.

Her presentations are attended by tens of thousands of people with the dream to work hard and make their own success selling It Works!® products. “Nobody in the beginning thought we could do it, and that drove me,” said Sowder. With headquarters in Palmetto, Florida and Dublin, Ireland, Sowder said the company’s culture is about fun, friendships and freedom.

She wants to inspire others so they too can follow their dreams and reach their professional and personal goals. “I teach and train people how to believe in themselves. I teach them how to take the income they earn and get out of debt,” she said. Sowder earned her Radford University degree in education and experienced firsthand the power that inspiring teachers have to change lives.

When Sowder graduated high school early, she took classes at Virginia Western Community College in the secretarial science program with instructor Martha Brown. At that time, Sowder didn’t know if she was destined to earn a four-year degree, but Brown changed her life with just a few words. “Since no one in my family attended college, we never talked about it. Martha Brown encouraged me to keep going, she said ‘you aren’t done,'" explained Sowder.

I love to help students who don’t have that opportunity. I want to help them be that teacher that says that one thing that will be a legacy changer."

While taking education classes at Radford, Sowder remembers another teacher who gave her advice that she continues to use today. “One of my education professors at Radford said don’t go into the teacher’s lounge and get caught up in the stories about students. Don’t judge your students based on what other teachers say about them. I carry that forward to the job today. Some people may be good at one subject and not good at others. That doesn’t mean they aren’t good at anything. You just have to help them find out what they love,” said Sowder.

Sowder and her husband David will be helping generations of Radford University education students and future teachers find their passion. Their gift of $105,000 to endow the Pamela Cowan Sowder ’79 Endowed Scholarship will provide a $5,000 scholarship to a fulltime undergraduate student studying in Radford University’s School of Teacher Education and Leadership. The Pamela Cowan Sowder ’79 Endowed Scholarship award is renewable and can provide scholarship funding for a total of two full academic years or four semesters. These scholarships will provide future teachers inspiration and encouragement in order to make a difference in the lives of their students and in their communities.

Sowder wants to encourage Radford University students to keep going and not give up. “My hope is that students can really dive into it and enjoy it. Immerse yourself in the college culture and personal development. No one can ever take your degree away,” said Sowder. “I was blessed that my parents said ‘you pay for the first quarter, and then every class you pass we will pay for it in the next quarter.’ I love to help students who don’t have that opportunity. I want to help them be that teacher that says that one thing that will be a legacy changer,” said Sowder.

Sowder is proud of her accomplishments and hopes to inspire others by example. She said she was a first-generation college student who became a first-generation multimillionaire, and she’s not done. “No one raises you and tells you that you can be a millionaire. The money is just a reflection of the work. I wanted to change my family’s lifetime and our legacy,” said Sowder.