Celebration and Life and Passion 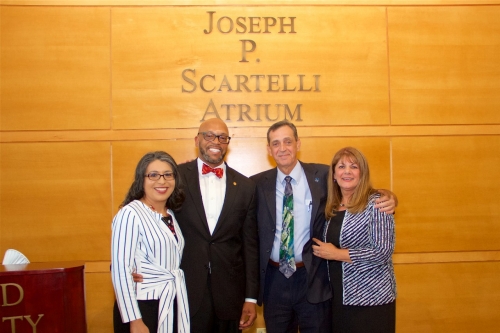 JOSEPH P. SCARTELLI ATRIUM IN THE COVINGTON CENTER FOR VISUAL AND PERFORMING ARTS NAMED IN HONOR OF PROVOST EMERITUS

“Tonight, we dedicate and unveil the  Joseph P. Scartelli Atrium in the Covington Center,” said Radford University President Brian O. Hemphill, Ph.D.,  at a special ceremony held Aug. 19 to honor the former  dean of the College of Visual and Performing Arts and provost emeritus, who retired from the University in July 2017.

“The people here are a testament  to your years of work,” said  President Hemphill.

“The name and legacy of Dr. Scartelli are etched on our campus and in our hearts,” President Hemphill continued. “Joe is forever a part of the Radford University family, as well as the Hemphill family.”

“My knees are shaking,” said an emotional Scartelli. “I’ll never be able to live up to this honor. How grateful I am to Radford University and to the people in this room.”

Scartelli continued, “When the $150,000 in scholarship money was announced, to think that students will receive support to study whatever their passion is and be able to go out and change the world with their art and their work, it is overwhelming.

“Thank you. There are no stronger words that I can say,” Scartelli said. “Thank you.”

Al Wojtera, chair of the Department of Music, opened the evening by discussing Scartelli’s numerous achievements since arriving at Radford University as program director of music therapy in 1981. He would eventually become dean of the College of Visual and Performing Arts in 1988 — and again in 2012 — as well as serve as Radford University’s interim provost for two separate tenures. “Joe Scartelli is an extraordinary person with an extraordinary career,” Wojtera stated.

“He has qualities that endear him to students, faculty and the community alike,” Wojtera continued. “He has unflappable personal integrity and has always been about giving back.” It was in the spirit of giving back that Scartelli and Kenneth “Ken” Bondurant would form the Arts Society of Radford University in 1990. Bondurant served as president of the society until his death in 2004.

The name and legacy of  Dr. Scartelli are etched on our campus and in our hearts."

“When Ken became too ill to work, Joe would come out to our home and bring the plans with him for the Covington Center, just so he could keep Ken involved,” said Bondurant’s widow, Carolee. “After Ken passed, Joe came to the memorial service and shot a potato cannon in Ken’s memory. That’s Joe — full of celebration and life and passion.”

Scartelli’s passion for education was reflected in the words of Dwayne Martin ’04, M.S. ’06, who was chosen to speak at the ceremony on behalf of Radford University students and alumni.

“I am just one of many who can trace their roots back to Dr. Scartelli,” said Martin, who serves as program director of the Claremont Therapeutic Day Treatment Program in Pulaski County. The Claremont School provides a structured environment for children who have been placed on homebound instruction by their primary school. “At the Claremont School, I have worked with over 129 different clients and their families,” Martin continued. “These children have some of the roughest backgrounds that one can imagine. Without the music therapy program at Radford University, I never would have been able to help any of these clients. Without Dr. Scartelli, there would have been no music therapy program.

“Dr. Scartelli, please hear 129 ‘thank yous’ from those that you have helped,” an emotional Martin said. “And please hear one more thank you from me.”

“When Radford University was in need of a stabilizing anchor, they turned to Joe,” said E. Carter Turner, former chair of the Department of Philosophy and Religious Studies and past president of the Faculty Senate, who spoke on behalf of the Radford University faculty. “Institutions need someone with strong character, and there has never been a better choice than Joe.”

J. Orion Rogers, dean of the Artis College of Science and Technology, who spoke on behalf of the Radford University administration and staff, reflected on the lessons he learned from Scartelli. “Joe is the embodiment of a servant leader. He taught me that the root of the word administrator is ‘minister,’” said Rogers. “That comes directly from the Latin word ministrare, which means ‘to serve.’

“He taught me the importance of serving our students,” Rogers said. “I remember Joe spending long days working as provost, only to see him sprinting across the parking lot at 5 p.m. so that he could then spend the evening teaching his graduate students.”

Scartelli’s work was not limited to Radford University, as illustrated by Greg and Fran ’79 Rooker, who spoke on behalf of the community. “Joe has always been a civic leader who has always refused to say no to an opportunity to better the community,” Greg Rooker said. “By never saying no, he added to an already stifling schedule, going all day long until 11 at night. I’m amazed.”

“Joe has been on the board of Brain Injury Services of SWVA for the past 10 years,” said Fran Rooker, founder of the nonprofit organization. “Thank you for all of the lives that you have touched.”

While the plaudits her father received during the ceremony did not come as a surprise to daughter Nicole Scartelli Sykes ’05, the amount of work he did outside of Radford University certainly did. “All of the boards — my goodness,” said Sykes after listening to the dozen-or-so boards of which her father was a member. “My brother and I knew of just a couple. We had no idea all of the work Dad did in the community.

“I still have tears from laughing and crying,” said Kathleen Harshberger ’80, chair of the Radford University Arts Society. “Every accolade Joe received was deserved. It speaks volumes that he is amazed by all of this, yet the rest of us are not. He is so humble.”

Speaking on behalf of the Scartelli family was Joe’s brother, Paul. After amusing the attendees with a few stories about what life was like growing up with the elder Scartelli, Paul ended with a hypothetical question to his brother.