Giving Creativity a Leg Up

Shawna Hession's '16 entry into the ADDY Awards, the digital painting series "Don't Let Them Fade Away."

Each year the American Advertising Awards — formerly the ADDYs — recognizes and rewards the creative spirit of excellence in the art of advertising. The student awards competition is a unique national awards program designed specifically for college students to showcase their work and gain valuable name recognition. To win at the national level of the American Advertising Awards, there are three stages: local, district and, finally, national. To reach the national level, an entry must win gold at both the local and district levels.

Each level of the American Advertising Awards requires the entrant to pay an entry fee, usually about $100. This fee can be cost-prohibitive for college students, forcing them to miss an opportunity to meet potential future employers and gain valuable name recognition for both themselves and the Radford University graphic design program. This is why O’Connor and Smith helped establish the ADDY Sponsorship Fund. The fund is designed to help offset the cost of the American Advertising Awards student entry fee.

By pairing the annual student graphic design show with the ADDY Sponsorship Fund, the graphic design professors wanted to engage the program’s many alumni in the spirit of competition, as well as philanthropy, by inviting all Radford University graphic design alumni to not only attend, but to judge the show as well.

“Toward that goal, we asked our alumni to participate and to jury the student show, and we asked them to donate $20 each toward the new ADDY Sponsorship Fund,” Smith said. Student Graphic Design show winners received award certificates and free entry of their winning pieces into the American Advertising Awards competition.

“In this way, our alumni will have the opportunity to directly influence Radford’s ADDY award entries and to make sure our program’s best work is represented,” he explained. 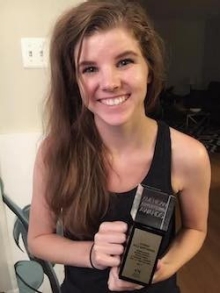 “For students, I think to have the necessary tools and opportunities to create and showcase their work are so important for their creative development,” says Chris Henry ’15. Henry is a graduate of the graphic design program as well as a supporter of the ADDY Sponsorship Fund. “Participating in the American Advertising Awards gives students a leg up in the field by allowing them to create at the pace of the design industry while giving students a chance to be recognized and sometimes even rewarded for dedication and hard work.

“As an alumnus who thrived from the help and support of other alumni, I feel a responsibility to support future art students in the same way,” Henry adds.

Hession’s entry, the digital painting series, “Don’t Let Them Fade Away,” focused on the plight of endangered species and focused on three separate animals: the Amur leopard, the black rhino and the Hawksbill sea turtle.

She settled on these animals for a variety of reasons, but two of the driving factors was the location of the animals and facts about each species.

“The major concept of the project was to show awareness of how these animals are on the verge of being extinct, so what better way to depict that than to illustrate them actually disappearing,” Hession said.

The original concept for the illustrations came from a 3D design course Hession took the fall of her senior year, which included a project based on elephants being poached for their ivory.

“I ended up creating a 3D geometric elephant kind of exploding — it didn’t look as morbid as it sounds — and that concept I had ended up being the inspiration for these posters,” she said. “I knew right away how I wanted to design it before even starting.”

Though Hession began working before receiving the national American Advertising Association award, the project helped her become a graphic designer at DECA, a nonprofit organization that works to prepare emerging leaders and entrepreneurs in various fields.

“My boss was blown away by my illustrations, and he thought that skill would help DECA grow with their merchandise, magazine spreads and other projects,” she said.

As part of her job, Hession primarily creates custom designs for chapters and organizations, as well as assisting DECA’s communications department with conference programs and collateral materials, the DECA magazine and other design work.