The Radford women’s basketball team wrapped up its season with a 24-9 (15-3) record while setting records along the way.

In the WNIT, the Highlanders secured their first-ever win over a Big Ten team with a 63-62 victory over Penn State on March 15 and was the first Big South team to win a WNIT game since 2013. With the victory, Radford has won games against Power 5 programs in back-to-back seasons.

Junior Destinee Walker from Florence, South Carolina, earned a spot on the honorable mention team after averaging 11 points per game, and sophomore Jen Falconer from Mechanicsburg, Pennsylvania, was acknowledged on the all-academic team for the first time in her career. White, Worthy and Walker combined to average 30.7 of Radford’s 60.1 points per game.

With a 20-point win over Campbell on Senior Day, the Highlanders set a program record with their 15th conference win of the season and ended the regular season on a 10-game winning streak. 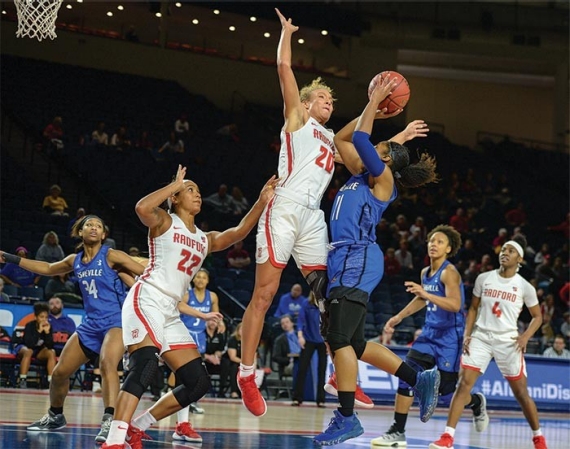 Following the regular season, head coach Mike McGuire was named Big South Coach of the Year for the second time in his career. McGuire led the Highlanders to 14-1 record over their final 15 games.

“To me, a Coach of the Year award is a result of having determined, hard-working and selfless people in and around the program. This is a program recognition in every way,” McGuire said. “I am blessed to be the women’s basketball coach at Radford University and cherish this opportunity daily.”

Following the season, assistant coach Camille Collier was selected as one of the Women’s Basketball Coaches Association’s 2018 Thirty Under 30. The program recognizes coaches at all levels who are leaders in women’s basketball. The program, now in its third year, aims to demonstrate that experience is not a requirement to be a leader.

“I am humbled and thankful to be recognized among a great group of coaches in our profession,” Collier said. “I am very appreciative of the opportunity to learn from Coach McGuire and to coach great student-athletes who continuously push me to become a better coach.”