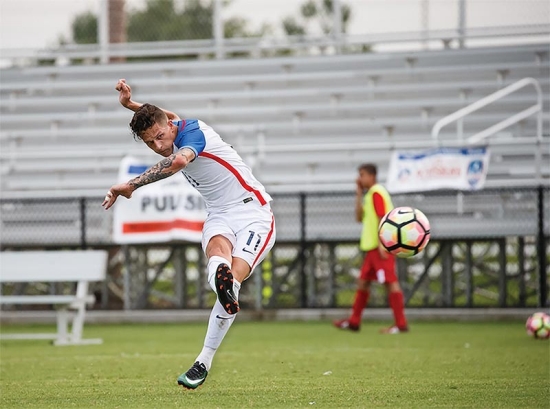 Very few receive the opportunity to represent their country while playing the game they love. Radford men’s soccer junior Nick Mayhugh did just that for the United States Paralympic National Team.

To be eligible for the US Paralympic National Team, players must be ambulant and have one of the following neurological conditions: have had a stroke, have cerebral palsy or suffered a brain injury. There are four levels of classification: FT5 (diplegia), FT6 (quadriplegia), FT7 (hemiplegia) and FT8 (players are minimally affected by one of three).

Mayhugh falls under the FT8 classification, due to suffering a stroke as a child as a result of being a premature birth.

“Throughout my entire childhood, no one understood or believed me when I would say that my norm was different,” Mayhugh added. “My doctors and family were unaware of the side effects I was experiencing until we later learned the side effects were a result of a stroke.”

Growing up with the lack of feeling on the left side of his body was normal to Mayhugh, and he gave it no thought until November 2010. That fall, Mayhugh had a grand mal seizure, which led to hours of tests and scans. Doctors found a dead spot on the right side of the brain, which was diagnosed as a result from a stroke he suffered in utero.

“All the dots started to connect from earlier in my childhood. I was finally given an explanation for my norm,” Mayhugh noted. “The stroke caused the lack of feeling, motor movement and sensation mainly in my left arm, hand and leg.”

The adventure started for the Gainesville native in early May 2017 as he noticed an advertisement for Paralympic team tryouts on the U.S. Soccer Instagram page and was urged to apply by his brother. Mayhugh reached out to the coaching staff, explaining his background, and he was invited to training camp in Chicago. The training camp ran June 1-7.

At the end of the training camp, participants would find out if they made the cut to travel to Chile for two international friendlies with the Chile Paralympic National Team.

“As soon as I got to the hotel, we started training. It was no different than our August training camps at Radford,” Mayhugh noted. “It was very professional. They treated us the same way that Coach Hancock treats us.”

Mayhugh had to adjust to the Paralympic soccer style of play, which features seven players on the field instead of 11 and two 30-minute periods. The substitution maximum is five within a maximum of three opportunities in the match. There is no offsides rule. The field dimensions are 70m by 50m, while the goal posts are set at 5m by 2m.

“It was definitely a challenge to adapt to the different formations and style of game that we play in the sevena-side game, but I received a lot of help from the coaches and veteran players,” Mayhugh noted. “In the seven-a-side game, you have to be very flexible in terms of positions that you are willing and able to play because of your team’s needs. Depending on what certain formations require, you may need to be able to play more than one position.”

Part of the adjustment was learning a new position as he found himself playing center midfield.

“I found myself running a lot more, because of what the position and the seven-a-side game demands from you mentally and physically,” Mayhugh added.

Simply happy to be a part of the experience, Mayhugh didn’t ask the coaching staff when final selections would be made, he was just being himself on the pitch. During the final days of training camp, Mayhugh was pulled aside to discover that he had made the roster for the Chile trip.

In addition to an already life-changing experience, Mayhugh’s life changed even more. While in Chicago, Mayhugh and training camp participants visited the Shirley Ryan Abilitylab, which has served as the best rehabilitation hospital in the country for 26 years.

“We were given the opportunity to speak, inspire and interact with patients and parents who have gone or are going through the same things that our team has gone through. I can humbly say it was an unforgettable experience that inspired me to change the way I look at my disabilities and how I value those who supported me throughout my medical speed bumps,” Mayhugh added. “Since being home, I have been in contact with a few local hospitals to set up times to visit and interact with patients. I would love to continue inspiring patients like those who inspired me in Chicago.”

My international teammates at Radford helped me adjust to this trip. I was surrounded by people who  didn’t speak my language and were new to us. That is very similar to preseason at Radford, when the new guys come in. We help them adjust to their new surroundings."

The experiences continued for Mayhugh as he traveled outside the United States for the first time in his life. Once arriving in Chile, the national team trained two times a day in preparation for their matches. Mayhugh played the final 25 minutes of the first match, but he does not remember coming onto the pitch due to an overwhelming amount of emotion.

“Walking into the locker room, seeing my name on the locker and that jersey inside it was surreal. That is when I realized that all this was actually real and I was representing our country,” Mayhugh said. “It was just like any other game as soon as I put the uniform on and the whistle blew.”

The first match resulted in a 6-0 victory, in which Mayhugh assisted on two goals. In the second match against Chile, Mayhugh tallied two goals and two assists in 50 minutes of action of a 10-0 victory.

On an off day, Mayhugh and his teammates explored the city of Santiago. The group took a train up into the mountains that overlooked the city and at the  Andes Mountains.

Having teammates from different countries at Radford helped Mayhugh adjust to going to another country.

“My international teammates at Radford helped me adjust to this trip. I was surrounded by people who  didn’t speak my language and were new to us,” Mayhugh added. “That is very similar to preseason at Radford, when the new guys come in. We help them adjust to their new surroundings.”

After spending time in a soccer-centered country, Mayhugh gained a new respect for the game and how it brings different nationalities together.

After returning home for two weeks, the national team traveled to Florida to face the Canadian Paralympic National Team July 21-23. In the first match, Mayhugh scored one goal in a 2-2 draw. For the second time in four games, Mayhugh found the back of the net twice in a 3-1 win to wrap up friendly play.

Mayhugh is no stranger to playing in big soccer matches and in front of large crowds. He has been a part of two Big South Regular Season Championships and one Big South Tournament Championship as well as two NCAA Tournaments.

“Playing in those big matches and that environment helped make everything calm for me,” Mayhugh noted. “The American Outlaws came out to our matches in Florida. They were playing drums and chanting. It was similar to the 2016 Big South Championship match.”

Joining former Olympian Dante Washington as the only two Highlanders to represent the United States in international play adds to memorable experience  for Mayhugh.

“Dante set a standard for Radford soccer,” Mayhugh added. “We strive to leave our mark like he did.”

After a successful summer, Mayhugh earned one of the spots on the U.S. roster for the IFCPF World Championships, hosted in San Luis, Argentina. The championships ran Sept. 4-24.

The U.S. team went 4-2, finishing fifth at the 16-team tournament. Mayhugh scored the tying goal in the U.S. team’s 3-2 win over Brazil. The fifth-place finish is the best finish in major world competition by the USA since the 1996 Paralympic Games.

“This is an actual dream come true. I grew up dreaming and wishing to play for the U.S. national team. I was given the chance to represent our country, while playing the game that I love and that’s something I can’t really describe,” Mayhugh said. “Putting on that jersey with the patch, standing in the starting lineup while the national anthem plays just chokes me up thinking about it. There is nothing better.”