Once More, With Music 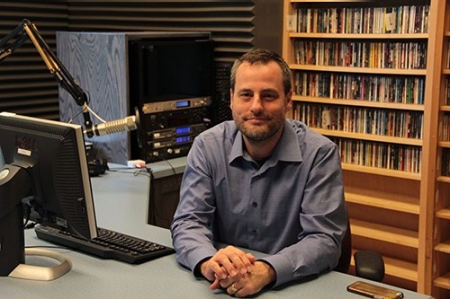 Adam Harris' days sound familiar. He answers email, takes phone calls and goes to meetings. But what sets this executive producer for “Mountain Stage with  Larry Groce” from West Virginia Public Broadcasting apart is each week a national radio audience hears the result of his efforts.

The Radford University community experienced these firsthand April 8, 2018, when Mountain Stage came to campus to tape a live show. The University Performance Series, WVRU and the Appalachian Events Committee hosted the two-hour event Harris produces. It featured five guest artists, performing live. This format was similar to when it airs from the West Virginia Culture Center Theater in Charleston, West Virginia.

Harris ’05, a music business alumnus, credits two Radford University programs with his success at Mountain Stage — his classes and his extracurricular time at WVRU, the University’s radio station.

Learning about the industry from his courses helped give him an understanding of music business. And he learned how to communicate with professional musicians and gained empathy for their challenges.

“This education helps you grow respect for what they do,” he said. “Day in and day out these artists have chosen to make a living playing music and it’s not easy.”

And Harris helps such musicians by booking them on Mountain Stage.

This is where his experience from working at WVRU played a large role. It provided him with real-life opportunities. Mountain Stage was the not the first time he brought live music to the radio. 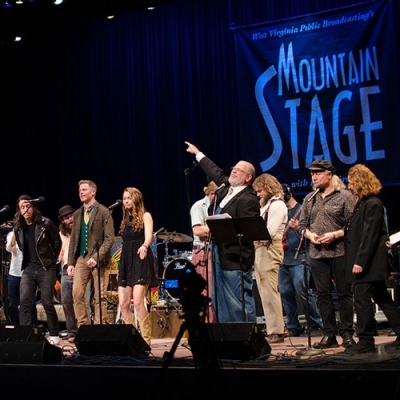 While working at WVRU, through General Manager Ashlee Claud and Operations Director Jon Benfield’s encouragement, Harris recorded and aired live bands. That gave him a rudimentary knowledge of studio engineering and some instrument-miking, both of which helped him grow within the Mountain Stages ranks, from stagehand to leading the 26 people it takes to produce each show.

“So many things I take for granted now I was able to do at WVRU,” he said. “They thought it was really cool that I wanted to have local bands in the studio. It’s another example of something I took away from there.”

WVRU was the perfect training ground for his future self. The station provided a hands-on education. And he said for many students, it was the first time they ever used microphones and recording equipment.

“WVRU gives you that platform to be able to make mistakes and grow as a professional and become prepared for the very competitive real world,” he said. “I am even more grateful looking back on it to have had a place to learn the craft and hone it.”

It was here he gained respect for the non-promotional aspects of public radio, such as avenues for exploring  new music not often heard on commercial stations.  He feels such a format allows for more creativity and music discovery.

At WVRU he also learned to keep his ego in check because public radio is about the audience. People listen because of the music and that is why they stay with a station or a show. Harris said, good radio involves presenting music the audience loves.

And from starting as an unpaid college intern at Mountain Stage to becoming its executive producer, Harris has proven he pays attention to his audience.

Maybe that is why a quote from artist Peter Mulvey resonates with him.

“If you can play in a town that is not your hometown and have anybody show up that you are not related to, you’ve put in a lot of work,” Harris quoted.