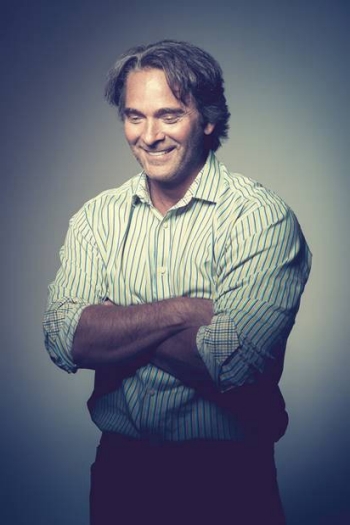 If you're ever fortunate enough to bump into  William “Woody” Prettyman ’87, ask him about the time he almost got into a fight with Ice-T in Las Vegas … over coffee sweetener.

Or ask about the time drummer Tommy Lee had a meltdown and fell asleep, all during one video shoot.

But maybe don’t mention the time he chose to stay in his Hampton Roads office to work and not fly to Memphis to meet Carrie Underwood during another shoot. He received a phone call from the country singer that day. She said she was taking the entire video crew out to lunch, and Prettyman missed it.

That one still stings.

Prettyman can casually drop celebrity names into a conversation, but certainly not in a pretentious, “hey-lookwho’ve-I’ve-met” sort of way. Working with famous people has become a normal way of life for him.

The son of a lifelong radio station owner and manager, Prettyman grew up as a self-described “radio brat,” attending concerts and big events, meeting and mingling with superstars like ’80s rock and roll legends Jon Bon Jovi and Richie Sambora.

Looking to follow in his father’s large radio footsteps, Prettyman studied business management at Radford University in the mid-’80s and jumped straight from college into a broadcasting gig. He enjoyed a decadelong radio career before moving to iHeart Media as vice president of sales for Virginia.

He found the perfect opportunity in a company named Studio Center, a voice-over production business that had been around for nearly 40 years.

Prettyman and his partners bought Studio Center and have since turned it into a booming audio and video production empire, one of the fastest-growing in the United States.

As CEO, Prettyman oversees the entire operation, including the company’s new 23,000 square-foot video and media headquarters in Virginia Beach, which now accompanies a line of offices in Washington, D.C., Richmond and on New York City’s Madison Avenue.

Studio Center provides radio and TV content and commercials for many well-known clients, such as McDonald’s, Subway, Lowes, Dick’s Sporting Goods and Bass Pro Shop, and it produces those amusing and unforgettable Duluth Trading underwear spots. “The underwear that fits,” Prettyman said, mimicking the gruff voice heard on the commercials. “We do all of that.”

Radford gave me time and exposed me to different things so I could figure out what I wanted to do and what I didn’t want to do."

The company also delves into the political realm, producing campaign commercials for President Donald Trump — “We made all of Trump’s ads,” he said — Hilary Clinton and former President Barack Obama.

“Love ’em or hate ’em, we do a lot of political spots,” Prettyman said. “We have a lot of valuable political clients. Rudy Giuliani came through for some spots a while back.”

In addition to commercials, Studio Center has a network division which produces unscripted TV shows. “We have 40 or 50 projects in development right now, and it’s a big push for us to produce our own content,” he said. The company also houses a new media division that designs and hosts websites.

The company employs 65 full-time workers — three of whom are Radford University alumni, including Prettyman’s stepson Zac Eckert ’15 — and about 800 independent contractors. And if you’re talented enough to score an internship at Studio Center, there is a good chance it could lead to a position at the company.

Along with the thousands of commercials the company produces, Prettyman and Studio Center developed a series of promotional videos last year for Radford University’s College of Business and Economics (COBE). The videos, which were distributed on social media and COBE’s web page, highlight the college and its successful programs  and alumni.

“We developed some pretty powerful videos for  COBE,” Prettyman said. “I was really proud to be part of that project.”

If you’re ever lucky enough to have a conversation with Prettyman, ask him how Radford University helped him create a vision and begin laying the groundwork for his future success.

“Radford gave me time and exposed me to different things so I could figure out what I wanted to do and what I didn’t want to do,” he said. “I’m very grateful to the University. It gave me the opportunity to grow up. I’ll always be grateful to the people there for allowing me to figure it out.”