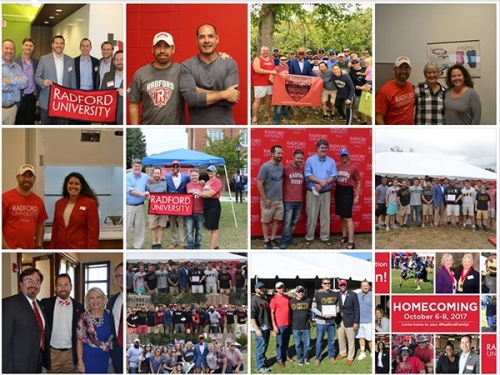 When Mike "Flip" DeFilippo ’90 arrived on campus in the fall of 1985, he was, in his own words, “lost.” Today, DeFilippo sits on the Board of Directors for the Radford University Alumni Association, serves as president of the National Capital Region Radford University Alumni Chapter, sits on the Alumni Advisory Board for the Artis College of Science and Technology, serves as chapter advisor for Phi Kappa Sigma and is a fixture at most Highlander events throughout the Commonwealth.

DeFilippo “found himself” at Radford University.

“Radford gave me direction and a place where I truly felt at home, and this has continued into my adult life,” says DeFilippo. “I feel an unbreakable bond to the Highlander Nation and feel compelled to give back to the place that gave me so much.”

That bond with Radford University began before DeFilippo was a student. “When I visited campus in the winter of 1985, I absolutely fell in love.  It just had a good feel to it,”  DeFilippo explained.

“Unfortunately, I was worried that I didn’t have the grades to get accepted. After I applied, I wrote letters, called the admissions office to make sure that they received my applicationand implored them to look at the full body of my work and not just my grades.”

When the self-professed introvert set foot on campus as a student, something changed in DeFilippo. “The University really drew me out of my shell and gave me confidence,” he says. “Attending Radford University was a real game-changer for me.”

However, he received an unfortunate letter from the University while home for winter break of his Radford freshman year.

“I was put on academic probation during the second semester of my freshman year,” DeFilippo explains. “But that was really a lifeline for me. I took a few tests and found out that I had a learning disability. The University was flexible in allowing me to work on my academics and gave me support in those efforts. Because of the support by the University, DeFilippo was able to raise his grades and, during his sophomore year, he joined the rugby team — despite not knowing anything about the sport. Once he raised his GPA to the required level, DeFilippo was also able to rush Phi Kappa Sigma during his junior year.

“I was still able to have the full college experience.”

DeFilippo had the opportunity to work for his alma mater, serving on the Alumni Relations team to help coordinate efforts for regional alumni activities and volunteer engagement in Northern Virginia. When DeFilippo left the position in order to spend more time with his family, he was given the opportunity to stay involved with Radford University by serving on  the Alumni Association Board  of Directors.

Radford gave me direction and a place where I truly felt at home, and this has continued into my adult life."

“I act as an ambassador, of sorts, for the University,” he explains. “We help find ways to engage with alumni and engage with students and help tell the Radford University story — show what is unique and special about the University and the community.”

While the board is still in its infancy and is still developing its mission, DeFilippo believes that the right pieces are in place for the board to be a success. “Under the leadership of Executive Director for Alumni Relations Laura Turk ’87, M.S. ’90 and Director of Alumni Relations Sandra M. Bond ’97, MBA ’00 and Alumni Association Board of Directors President Kevin Rogers ’87, the board will help do great things for Radford University.

“I want every alumni to be able to engage with what’s going on at the University no matter how far away they are,” DeFilippo continued.

In his role as president of the National Capital Region Radford University Alumni Chapter, DeFilippo is able to fulfill his passion for giving back to the University that he says gave him so much. “I want to give more than I have received, and I’ve received so much more than I can believe,” he added.

As president, DeFilippo helps organize the annual “Radford University Day at Nationals Park” in conjunction with Major League Baseball’s Washington Nationals. The event, which routinely hosts hundreds of Radford University alumni and friends, was particularly memorable for DeFilippo in 2015.

“We were able to have 10 alumni walk onto the field prior to the game to be greeted as special guests of the Nationals,” he says. “The Nationals’ star first baseman, Ryan Zimmerman — whose wife, Heather ’06, is an alumna — took some pictures with us while holding the Radford University flag.” Zimmerman, who graduated from the University of Virginia, was somewhat apprehensive to take the picture at first. “I said ‘Ryan, it’s not for us, it’s for Heather,’” DeFilippo said with a laugh.

Even the Nationals’ opponent, the Colorado Rockies, recognized that it was Radford University Day and adjusted their pitching rotation so that Eddie Butler, a former Radford University pitcher, could start in front of his “home” crowd.

“That everyone involved recognized and supported our efforts to bring Radford University alumni together was a really cool thing,” DeFilippo says.

It is hard not to recognize the efforts of someone who works so hard to bring Highlander pride with him wherever he goes — quite literally.

“I always carry my original Radford University ID with me,” DeFilippo explains. “I even post a picture of  it online around Homecoming every year.”