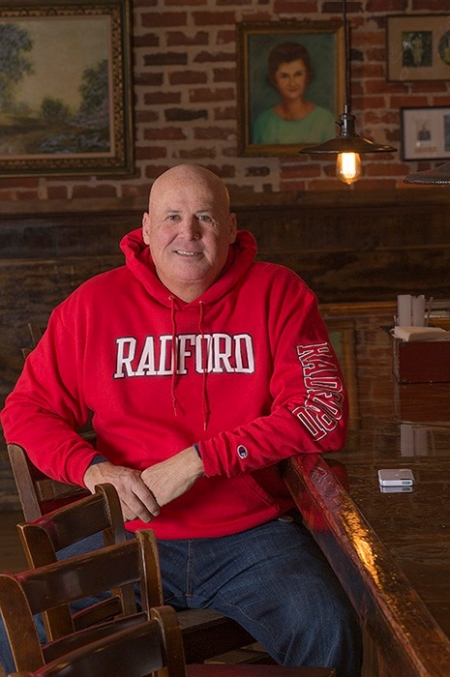 Even after a career spanning the who’s-who of highprofile and classified organizations, Matt Donlon ’82 has always carved his own path.

Donlon continued that independence with the launch of his own company, UZURV, which aims to integrate with ride-sharing platforms.

“What I got out of Radford was how to take some risks,” Donlon said. “Life happens not necessarily in the four years at college. I was a late bloomer — that’s the honest truth. [Radford] was a good foundation. I learned about love, relationships and friendships. Those go a long way. It isn’t always about the academics in business.”

That risk taking led Donlon to TRW — since purchased by Northrup Grumman — after graduation. While TRW had a hand in the aerospace, automotive and credit reporting industries, Donlon’s expertise focused on TRW’s premier aerospace intelligence programs.

From there — Donlon’s career spanned organizations such as the Department of the Navy, specifically highly classified R&D programs, including special access or black programs; NASA, with involvement in highly sensitive R&D aeronautics; the Defense Advanced Research Projects Agency (DARPA); and the Software Engineering Institute– Carnegie Mellon University (SEI–CMU), which is home to the initial Computer Emergency Response Team (CERT) that stores the largest database of internet vulnerabilities and has aided similar programs grow across the globe.

In 2000, following his work in the intelligence field, Donlon founded the Extranet Secure Portals (ESP) Group, which developed and marketed an application service provider secure enough to be used by the security community and beyond. ESP Group was sold in 2006 to NC4, an international solution provider that collects, manages and shares information to mitigate risks, manage incidents and securely communicate and collaborate.

From that point, Donlon invested in new businesses, including a horse hospital, a commercial restaurant building in Carytown, a whiskey distillery in Lovingston — and then became an Uber driver. But Donlon’s path wasn’t going to stop there.

This was the inspiration for his new startup.

“I realized as cool as Uber is, there are gaps,” Donlon said. “There are things that can make it better. If a thirdparty app makes your experience as a rider and driver better and gives these ride-sharing companies more business, that would be an awesome company.”

“UZURV was born from this idea and is now in 153 cities, and 53,000 drivers are now using my platform,” Donlon said. “We got a good contract with GRTC Transit System and the American Cancer Society.”

UZURV is a middle-ware software that leverages the independent drivers. Through this program, clients select specific drivers at specific times in advance. The platform also allows for classifications and specific training requirements for drivers, such as first-aid, and disability, pet-friendly, kid-friendly or senior friendly training.

“From a rider standpoint, they want the economics of Uber or Lyft, but they want the reliability of a car service and the familiarity and trust of their own chauffeur.  That’s what we give them,” Donlon said. “Drivers are able to build a list of clients, have a better schedule and earn residual income.”

After the company’s initial two-year startup, Donlon has handed the reins over to a team, which has allowed him to step back and play the true role of founder.

“I guess I’m an entrepreneur,” he said. “The reason I  do what I do is because I could never be an employee. It’s not in my DNA. I’m a lousy employee and I’d be the first one to fire me, so I have to go off and create my own stuff.”