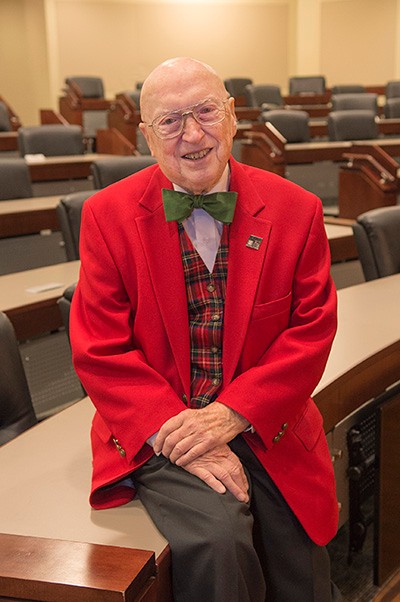 WHAT DO YOU DO IF YOU ARE 69 YEARS OLD AND RETIRED?  IF YOU’RE DICK BAYNTON, YOU PURSUE AN MBA.

What do you do if, at 69 years old, you have just sold your successful countertop fabrication and distribution company to an international firm? What do you do if your career, which began at a construction firm in Michigan in 1949, continued to a factory in New York, federal government posts in Wyoming as chief architect, a position as Pacific construction cost examiner for the Pacific Area in Hawaii as well as management positions for a large corporation, was — after almost 50 years — over?

If you are Dick Baynton MBA ’98, you go back  to college.

Baynton was about three weeks into retirement when, while driving through Roanoke in 1997, he saw a billboard advertising Radford University. “It said ‘We are here for you at RU,’ and I thought that was pretty clever,” explained Baynton. “I had worked with a lot of MBAs during my decades in business, and I respected the expertise that each one brought. The billboard’s message piqued my interest, so I decided to inquire about Radford University’s MBA program.”

Nearly 50 years had passed since the Michigan native was last in a college classroom, graduating from Michigan State — after an interruption to serve in the Navy during World War II — in 1949 with a degree in forestry, business and engineering. “To be honest with you, my grades as an undergraduate weren’t that great, so it took a little encouragement from my late wife, Elaine, for me to enroll in the program,” Baynton says. “I knew I wanted, and needed, face-to-face instruction in order for it to work, and that was something that Radford University was able to offer me.”

Unfortunately, Baynton’s time at Radford University almost ended before it even began.

“My daughter had a heart attack just as I was beginning my classes,” explains Baynton. “She was going to require round-the-clock care, as well as a kidney and a pancreas transplant, so I thought it best to drop out of the program. However, my wife urged me to continue; she really pushed me to finish.”

Baynton commuted from his home in Roanoke to the Radford University campus for each class. He even underwent a heart bypass surgery as a student and never missed an assignment. To say that his time at Radford University was a success would be something of an understatement. He finished second in his graduating class and was nationally recognized for his thesis about the order of succession in a successful business.

With the help of his wife, who passed away in 2014, Baynton established the Richard and Elaine Baynton College of Business and Economics Scholarship in 2007. The scholarship gives preference to students who are organ recipients or students with other physical handicaps.

“I had a great opportunity at Radford University, and I took advantage of it,” Baynton says. “I want to give other students the same opportunity.”

Today, Baynton puts his Radford University education to use as a business consultant. He also writes a weekly column for The Roanoke Star and has written a book, “The Handbook of Small Business.” He wears his Highlander pride, literally, when you see him in public sporting his signature Radford University hat. “I’ve got three caps and three cups,” he says with a laugh.

“Attending Radford University is as good as going to Stanford, Harvard or Yale,” he continues. “It is the best university you can find regarding curriculum and faculty. It all depends upon  the participant.

While Baynton, now 90, does not make the trip to campus as much as he used to when he was a spry 70-year-old student, he still gets the same feeling. “I always took the back roads when I was commuting, to avoid the interstate. When I saw Muse Hall peeking out from above the railroad tracks, that’s when I knew I was home.

“When I travel back to campus now, I still look for Muse Hall and the amazing new Kyle Hall.”