Martha Minter strolled around the Radford University campus on a cloudy but comfortable early October day with her friend, taking in all this year’s Highlanders Festival had to offer. 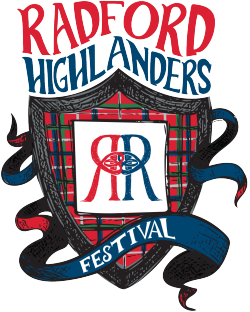 Like many visitors to the annual event, Minter loved the live music — “it’s absolutely fantastic,” she said — the vendors and food options, the Highland games and, of course, learning more about her own Scottish heritage.

“I’m learning so much, and it’s like coming home,” said Minter, who lives in Roanoke, Virginia. “It feels like home, and I appreciate Radford for putting this [festival] on. I really do.”

Before moving on to explore more entertainment throughout the festival, Minter confessed one additional motivation that she and her friend had for attending.

“We’re ISO [in search of] men in kilts,” she said as both sheepishly laughed. “It became a thing a couple of months ago.” She did not elaborate.

All around campus on Oct. 9, 2021, Minter and her friend, along with thousands of other festivalgoers, celebrated the region’s Scots-Irish heritage by attending the uniquely Highlander experiences. 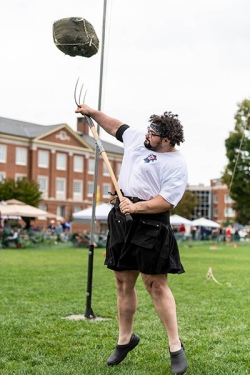 The festival, presented through a partnership between Radford University and the City of Radford, offers fun for everyone with sheepherding demonstrations, children’s games and the pipe and drum bands. More than 40 craft and food vendors were on hand offering authentic Scottish fare, classic festival food and favorite American classics like barbecue and funnel cakes.

Lively Celtic folk music from the bands SYR and Kinnfolk filled the air, providing a perfect soundtrack for the festival while turning Moffett Lawn into a grassy dance floor.

“The audience was so engaged, dancing, clapping and singing along,” said Julie Kinn of Kinnfolk. “We’re from Roanoke, so it was great seeing our neighbors in Southwest Virginia showing off their enthusiasm for Celtic culture. We hope we’ll see a lot of those faces again.”

PanJammers, an award-winning steel drum orchestra based in Blacksburg, Virginia, played on the Clocks Plaza on campus.

A massed band performance comprising the Radford University Highlands Pipes and Drums and Virginia Highlands Pipe and Drums provided the familiar sounds of bagpipes and percussion. 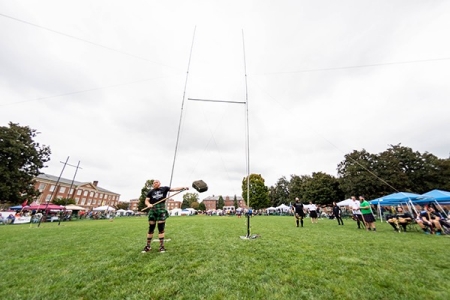 The festival also offered the traditional Scottish clans march. Clans are a concept dating back to the 12th century, when extended networks of families had loyalties to a particular chief.

One of the more popular attractions at the Highlanders Festival each year is the Highland games, which offers events and competitions associated with rural and military life, including weights for distance and height; the stones, similar to modern-day shotput; the sheaf toss; and the crowd-pleasing caber toss.

Chad Clark organizes the games. Being able to come back to campus “means the world to me,” he said.

“It’s important for events like this to continue on because it keeps heritage and traditions and culture alive,” Clark said. “A lot of times, I tell people Highland games and heavy athletics are the vehicle that keeps continuing Scottish culture and heritage.”

Clark encourages those who attend the games to cheer loudly because the games are “Scottish, but they ain’t golf,” he joked. He also has one more encouraging bit of advice that certainly will make some festivalgoers happy.