Standing on the floor of the New York Stock Exchange on Oct. 5, 2021, preparing to ring the bell signifying the public offering of his company, Benson Hill, Matt Crisp ’04 had a unique feeling that he had come full circle. 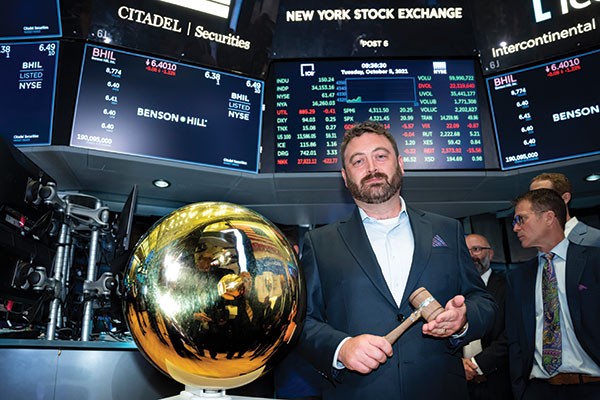 “The last time I was on that floor was when I was a student at Radford University,” Crisp said. “We had gone there on a trip with SMIPO, and being back there almost 20 years later was a surreal experience.”

SMIPO is the colloquial term for Radford University’s Student Managed Investment Portfolio Organization. As a Radford finance major in 2002, Crisp was one of the masterminds behind its creation.

The student-run organization manages funds for the Radford University Foundation and provides Davis College of Business and Economics students with a unique opportunity to gain practical experience in the management and decision-making processes of a corporate-structured organization.

So, when Crisp found himself back on the NYSE floor, he was proud to be back on the “podium with 13 of my colleagues and friends,” he said, “and our co-founder and my wife [Kelly Snead Crisp], who’s also a 2004 Radford graduate. It was a wonderful experience, and I’m very grateful for the opportunity.”

The St. Louis, Missouri-based company describes itself as an “agriculture technology company that aims to unlock the global genetic potential of plants in order to enhance the sustainability of food and feed production via the combination of plant biology, big data analytics and cloud computing.”

“In a nutshell,” Crisp explained, “we make better food and ingredients.

After graduating from Radford, Crisp worked for a while as a venture capitalist but soon became passionate about how “we use technology to advance food and agriculture and our food systems,” he said.

That passion became the catalyst for Benson Hill, along with “some really intelligent scientists in the St. Louis area,” said Crisp, who joked that he last took a science class in high school — and he got a D.

“But, in all seriousness,” he said, “I think a lot of our success comes from working with some pretty amazing people who know science and technology.”

Benson Hill has about 350 employees, with about 150 of those being within the company’s science and technology organization that works on platform and product development in plant, data and food science. 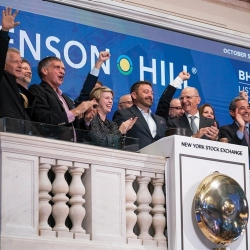 Matt and Kelly Crisp ring the opening bell at the New York Stock Exchange on Oct. 5, 2021, to celebrate the listing of his company, Benson Hill.

“We have an amazing team,” said Crisp before circling back to the team of Radford faculty and fellow students who helped teach and show him the meaning and value of success within the confines of running an organization and the relationships made along the way.

“The experiential learning at Radford was an enormous opportunity for me to develop character and enhance my leadership capabilities,” Crisp explained. “It really enabled me to found a company, with some really smart folks, and at Benson Hill, we’re on a mission to advance the food system.

“Going public is a great milestone, but it’s just a step along the journey,” he continued, “one that started at Radford and is coming full circle and beyond.”