Its communities once produced an abundance of coal. Jobs were plentiful. Towns were vibrant. 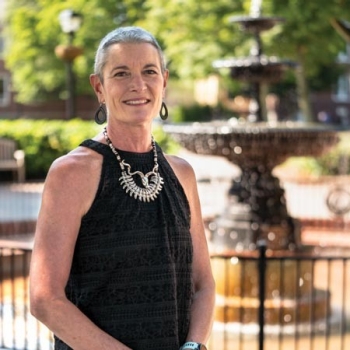 Circumstances change, though, and so do narratives. These days, most of the mines in those same communities are empty. Jobs have vanished — poverty, therefore, is rising — and populations in those once-booming towns are dwindling.

While coal still provides much of the region’s energy needs, only a handful of mines remain open.

This is the story of the Jiu Valley in Romania’s Carpathian Mountains, a story that closely mimics that of the Central Appalachian region. People in the Jiu Valley, like many in the Appalachians, are struggling to rebuild their communities.

“Mining has been such an integral part of the people’s identities there,” said Theresa Burriss, Ph.D., Radford University’s Director of Appalachian Studies and the Appalachian Regional & Rural Studies Center. “Much like what has happened in Central Appalachia, the mining industry has been decimated. It has been a difficult transition re-inventing not just their communities, but their very identity.”

Burriss, a Southwest Virginia native, is a scholar of the region and carries a deep understanding of Central Appalachia and its struggles. She also carries with her a desire to help.

It’s one reason she agreed to serve as U.S. co-chair of the 2019 Appalachian/Carpathian Mountain Conference, which convened that year in October. The goal of the conference was to explore the striking parallels between the two regions, which are located thousands of miles apart.

Burriss was already familiar with the Romanian Carpathians, having previously visited and taught in the area. She and fellow Radford University faculty members — Professor of Geospatial Science Rick Roth, Ph.D., and Professor of Biology Christine Small, Ph.D. — presented at the conference in 2015, and she taught at Transilvania University in Brasov, Romania in 2017. While there, she visited the coal mining region and was struck by the similarities it shared with the Appalachian mining region, particularly in Southwest Virginia, Southern West Virginia and Eastern Kentucky. 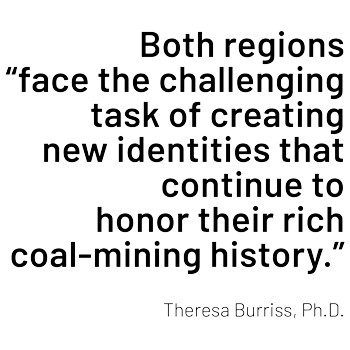 On her 2017 trip to Romania, Burriss met with miners and residents in towns where mining had been abandoned. “They had so much pride in their communities and the work they had done,” Burriss said. “It’s very similar to the Appalachian coal miner.”

In Petrila, a town in the Jiu Valley of about 22,000 people, Burriss met a former coal cartographer, Ion Barbu, who is diligently working to turn around the fortunes of the communities. “He is a visionary; he pushes boundaries and is very provocative,” she said. “He is transforming this once-thriving coal-mining community.”

While visiting the Jiu Valley in 2019, Burriss was interviewed by local media and asked about her work with Barbu, former miners and others in the region.

“As Appalachians, we have much to learn from Barbu. The whole community has something to teach the United States, and we are here to learn from them,” Burriss said, “and to take those lessons back home.”

People in the Jiu Valley inspired Burriss and her colleagues with their willingness “to go beyond what we typically know,” she said.

One such strategy has Barbu —  a charismatic, renowned artist and “a visionary,” Burriss said — and those living in the Jiu Valley, looking to purchase a once state-owned mine, now abandoned, and converting it into a museum, and theater and gallery spaces. Other plans are being developed to reshape the mines and revitalize the communities.

“I fell in love with the country in terms of its beauty and culture,” Burriss said. “It’s a special kind of place.”

Like Romania’s Jiu Valley, Central Appalachian communities are transitioning to post-coal economies, and both regions “face the challenging task of creating new identities that continue to honor their rich coal-mining history,” Burriss said. “Barbu and some residents of Petrila are demonstrating deeply creative ways to reimagine life after coal. Their efforts provide a renewed sense of purpose to many and illustrate what successful industrial heritage can look like as a tourist destination.”