The key to the future? Old-fashioned empathy

Brian Fanzo ’03 is accustomed to zipping around the world at a pace that is almost as fast as he talks. 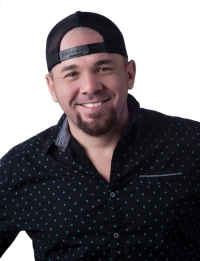 The digital futurist and iSocialFanz founder ordinarily delivers 60-some keynote talks a year, but like many of us, Brian is working mostly from home these days. However, in typical Brian Fanzo fashion, he is shaping new and innovative ways to connect with his ever-growing audience.
Not only is he connecting, he is spreading a profound message about an idea he calls digital empathy.

“What I mean by that is we need to form an empathy perspective. ”
Brian said, gesticulating in front of a camera in his home office, donning his trademark backward ballcap.

“We now have the ability to not only tell our story, but to listen and learn from people around the world.”

Many people Zooming into Brian’s Highlander Wisdom Series webinar in April listened and learned a lot, too, as Brian told his story and imparted wisdom that comes from years of experience of conducting business — he’s worked with such brands as IBM, Dell, Adobe, UFC and Applebee’s — and forming friendships in person and online.

Brian majored in business information systems at Radford and went straight from graduation to a job with the U.S. Department of Defense. He soon began managing a global security team involving all military branches. After nine years there, he pursued his dream job as a “digital evangelist.” Now, the Pittsburgh, Pennsylvania native and father of three daughters is an influencer with close to a half million social media followers.

“In my career, a lot of things have transcended since Radford,” Brian said in the Highlander Wisdom webinar. “It’s been pretty amazing; it’s been a wild ride.”

He has certainly accomplished great things, and he sees others achieving greatness, too. And, he encourages them — and everyone — to tell their authentic story.

“I believe there are a lot of people doing great things, but most of us do not know about all of that, because we have this noise, we have bad news… and right now we have coronavirus news,” he says.

How can the world become more empathetic? Brian rhetorically asks.
“I’m here to give you that answer,” he teases before revealing truths from his experiences.

“The answer is, we have to allow other people to be empathetic toward us. If every one of us tells our story and allows people in and to be empathetic to us, to understand who we are, together we would combine to make the world a more empathetic place. I do believe we are a world full of good people doing good things.