Sharing the gift of virtual travel

Krisha Chachra has been a freelance travel reporter since she was 15. 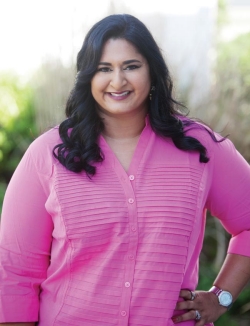 It began in August 1991, on a family trip to the former USSR. Her father was attending a conference there, and one morning, they awoke to commotion in the streets.

More accurately, “It was chaos,” Krisha said. She and her family found themselves in the middle of a coup when communist leaders attempted, unsuccessfully it turned out, to overthrow Soviet President Mikhail Gorbachev.

Moved by the excitement and gravity of the moment, Krisha and her then 12-year-old brother, Vishesh, grabbed a camcorder and fearlessly took to the streets, amid protesters and tanks in Red Square, to capture history in the making. When she returned to the United States, she wrote an article about the experience for the Roanoke Times.

Krisha had her first newspaper byline at age 15. “I’ll never forget that feeling of freedom and elation,” she said. “I was hooked.” She became hooked on writing and hooked on traveling.

Krisha, a member of the Radford University Board of Visitors, has traveled around the world — that’s 45 counties and six continents — and she has documented many of those trips in travel columns for NPR, PBS, USA Weekend Magazine, the Roanoke Times and the Honolulu Advertiser. Most recently, she authored travel stories for New River Valley Magazine.

In the time of COVID-19, physical distancing and wistfully canceling unnecessary trips, Krisha gave a virtual gift of travel through a webinar in the Highlander Wisdom Series. For those watching and engaging in early June, she helped viewers zoom around the world by providing a guided tour, telling stories and sharing vivid photos and videos of past trips to Greece, Turkey, Dubai and India, her family’s home country.

“This is a great topic for us to talk about, because we’ve been missing travel, given the pandemic,” Krisha said in the webinar, which can be viewed on the Alumni Relation’s website. “I know many of you may have had plans to travel overseas that were thwarted, but we can still talk about it. We can share.”

“Having this webinar series is a great opportunity to connect with people and also learn about something we might be interested in,” Krisha said. “It’s nice to meet people through webinars like the Highlander Wisdom Series and explore new ideas. We can learn more about things we’ve been curious about.”