The Power of Caring

Briyana Jackson knows firsthand the impact of healing - and helping others heal.

From the time Briyana Jackson ’18 was seven years old until her junior year at Radford University, she cared for her mother, who battled kidney disease and diabetes. Providing support for her single mother was not a chore or burden, Jackson recalls, but rather inspiration for what she would eventually pursue with her professional life.

“My mother was a very strong woman,” Jackson said, “I never looked at it as me being her caretaker. I just saw her as my mother, and I wanted to do everything I could to help her.” 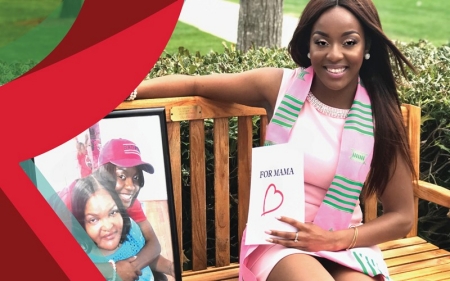 In June 2015, after more than a decade of providing loving care, Jackson’s mother passed away. At that time, Briyana was preparing for her senior year at Radford, which would begin in August. Although she was dealing with a tremendous amount of grief and navigating a very difficult time, Jackson knew she could not pause or stop her education.

“I had one month to essentially heal,” remembered Jackson. “But, it was such a shock that my grief didn’t hit me until later during the fall semester. Through all of that, though, I never thought about time off or leaving my studies. I knew I had to finish to make my mother proud, even if that meant I had to grieve along the way.”

Jackson says it did not take long for her to discover her new path. She first encountered recreational therapy while working an after-school job at Commonwealth Assisted Living as a Certified Nursing Assistant in the memory care wing. There, she worked with certified recreational therapists and occupational therapists in helping clients with activities of their choosing while developing deep and long-lasting relationships.

“There was a particular recreational therapist that I was very close to from day one,” Jackson said. “I worked with her and her caseload of clients every day, and I saw how meaningful her services were to the wing. I explained to her how I wanted to change my major because I wanted something fresh, but I wanted to remain in healthcare and make a difference with clients. From that conversation, she introduced me to and sparked my interest in the therapy world.”

Radford is the reason why I am the woman I am today."

Jackson soon changed her major to recreation, parks and tourism with a concentration in recreational therapy. The change in her studies motivated her to keep going during the difficult times of grief.

“There would be days when I had no strength to go to work or class,” Jackson said. “But, recreational therapy healed me. It opened up my eyes to a lot of things and people that I honestly did not expect to be connected to. It allowed me to build relationships with my peers and professors, and it helped me embrace the very part of me that faded when I lost my mother, my passion.”

Jackson immediately began searching for occupational therapy programs in Virginia and found one of the best closer than she ever imagined, Radford University Carilion (RUC).

“I began completing my requirements because I made up my mind that I wanted more. I wanted to push clients to be better, so that they can succeed in their daily lives,” she said.

By the time Jackson graduated from Radford in May 2018 with her bachelor’s degree, she had already been accepted into the Master of Occupational Therapy (M.O.T.) program at RUC in Roanoke. She has excelled in the program and will graduate in December 2020.

“Getting an undergraduate degree at Radford was special, because Radford really is home for me,” Jackson said. “I’ve met, bonded with and created some wonderful relationships with individuals that made an impact on me. Radford is the reason why I am the woman I am today.”

Jackson feels just as strongly about her current educational home at RUC.
“RUC is just as amazing,” she said.

“What I love most about RUC is the intimacy of the campus. It’s just the right amount of people in just the right location. I feel like we’re one, and I still feel the family atmosphere.”

Jackson has not settled on the specific client population she will work with once she graduates, but she says she still has time to explore her passions and establish the right fit.

“With occupational therapy, I realize that I am an open canvas,” said Jackson. “That means whatever paint is handed to me, I’m determined to create a masterpiece. Even though I haven’t chosen which population I want to serve yet, as long as I am serving and helping others make a difference, I will be happy.”