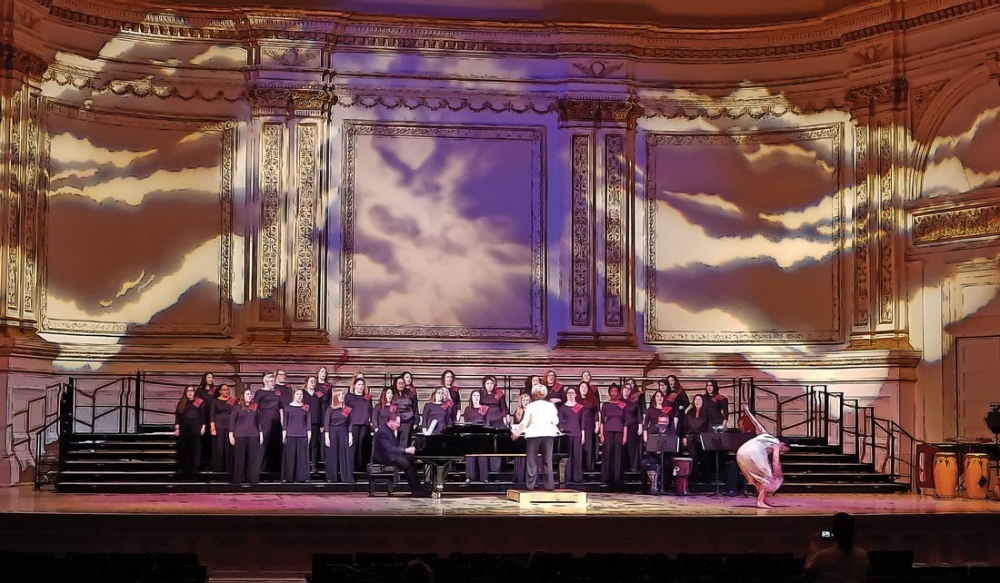 After lots of practice — plus dreams,
determination, grit and nerves — the Radford
University Singers perform at Carnegie Hall.

THIS WAS THE LONG AWAITED MOMENT. 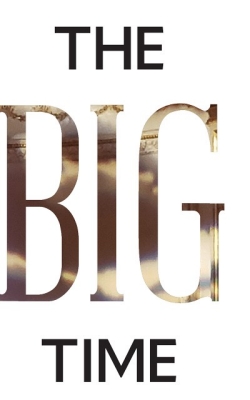 The spotlight was shining brightly on singers from Radford University from one of the world’s most famous stages. Every footstep to their marks onstage reverberated through the hall. An audience filled with supporters of the arts watched with anticipation. And, then, their unforgettable moment began.

The voices, seemingly flawless, harmonized on the Ronald O. Perelman Stage at Carnegie Hall in New York City. The impeccably melodic vocalists stood on a platform that has hosted the world’s most distinguished musicians. But, for the Radford University Singers, acclaimed now in their own right, this wasn’t the time to stand in awe. They were focused on singing the right pitch, watching for cues and listening for harmony among their neighbors, all while making history for the University. This marked the first time a group from Radford University has performed on that stage.

The Radford University Singers were performing as part of the National Concerts women’s chorus on February 16, 2020. The group was one of five ensembles made up of high school and college singers and was the largest group at the concert. Thirty-nine women traveled to Carnegie Hall from Radford University by bus.

Meredith Bowen, D.M.A., director of choral activities and assistant professor of music at Radford University, soaked in every moment.

“To be onstage and to hear the women and that ethereal sound of them coming together and all the energy and all that focus,” Bowen said. “I was in tears, and I do not get that way. It was so moving and a beautiful experience. I think it was life-changing for a lot of people, including myself.”

She directed the group onstage and had a perfect view of this experience.

“There is a certain energy that happens when a group comes together with a single focus,” Bowen said. “Our hearts start to beat together when we sing together. That’s one of the special things about singing in a choir. We’re all breathing together, and our hearts beat as one, and everybody without exception was in it to win it.” 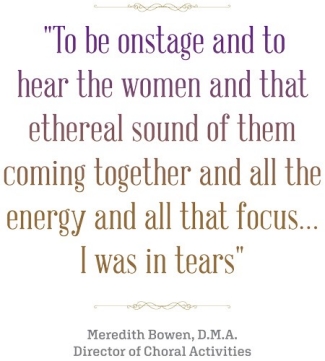 Bowen helped lead the singers to this remarkable moment thanks to connections she made throughout her accomplished career. Through grants and those connections, she helped commission a friend, composer Andrea Clearfield, D.M.A., to craft a piece that evolved into a 15-minute work with three movements. Other connections led Bowen to National Concerts, a New York City-based company that offers performance collaborations for choirs at Carnegie Hall and other venues throughout the United States. The company offered to premier Clearfield’s piece at Carnegie Hall, and the women of the Radford University Singers started their journey to New York.

Bowen said the vetted group that made the trip jumped on board to an amazing level.

As their voices resonated through the hall, the marquee outside clearly celebrated the momentous occasion. Under the theme of the concert, “What is Home?”, was a familiar name that made them all proud to see in person — the Radford University Singers. 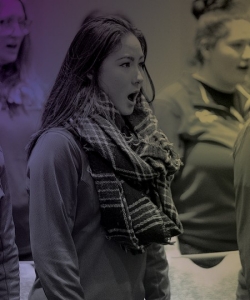 It was a surreal moment for Bowen, who once sat high in the hall, far from the stage, dreaming of performing on the stage below. That moment arrived for her and her students from various backgrounds, majors and experiences.

“Singing is a skill, not a talent,” Bowen said. “We had at least 10 students onstage at Carnegie who were not music students. That’s what a little perseverance, determination and grit can yield.”

This was a mountaintop experience for the women. They sang three songs as an ensemble, then collaborated with other groups throughout the performance. The partnerships and connections they made added to the experience.

The singers spent months before the concert perfecting their voices. When they arrived in New York City, they practiced hours more with industry insiders to gain more knowledge of their craft. All this work prepared them for that long-awaited moment.

“That was the energy I’ve been trying to find for the last four years for these folks. They were all there, singularly focused,” Bowen said. 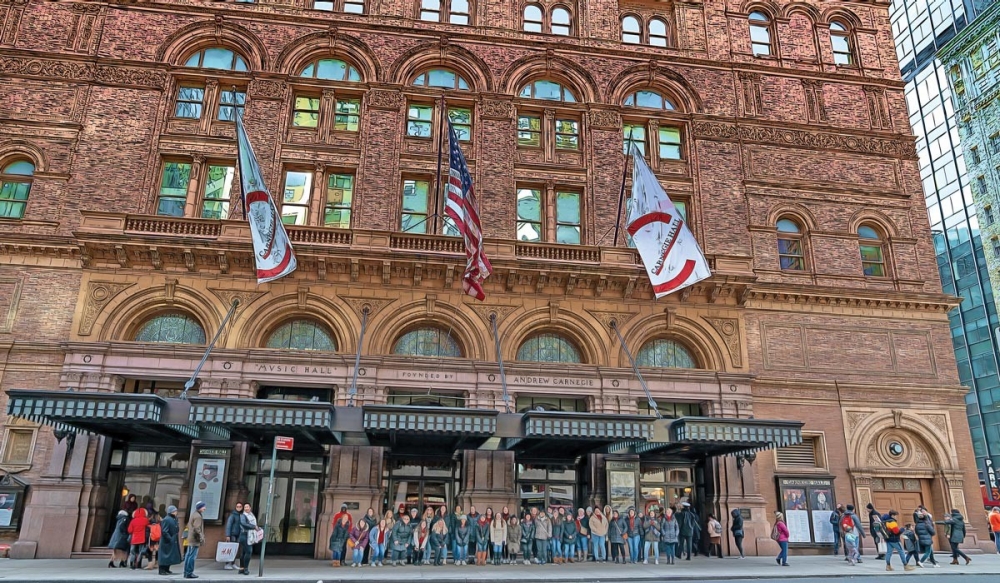 The Radford Singers outside Carnegie Hall in New York City

“We are in New York City to sing at Carnegie Hall.” Words Cierra Bird, now a sophomore, never imagined saying this early in her college career.

“I’m only 18, and it is an opportunity of a lifetime,” Bird said. During her first full day in New York City, a day before their Carnegie Hall debut, she and her fellow Radford University Singers were confident they had memorized and practiced enough to make this performance impeccable. Still, nerves were starting to set in just thinking of the upcoming concert and the history-making weight it carried.

“I am nervous a little bit, but I think I am well-prepared enough that I will be fine. If we can just go out there and sing, I think we’ll be good,” Bird said.

This once-in-a-lifetime opportunity became even rarer when the composer of one piece the ensemble sang, Andrea Clearfield, coached the singers during a practice session at a nearby event space in a hotel blocks away from Carnegie Hall.

“It was really cool to get to know what she went through when she was composing this piece and what she wanted from it. We were able to make her visions come to life, while we were singing,” Bird said.

Radford University helped prepare her for this moment by instilling courage and helping her embrace new moments.

“It’s just amazing, and I’m very proud to be a Highlander.”

Rachael Cahoon ’20 ended her undergraduate college years with this magical experience. She double-majored in history and philosophy and religious studies. Her passion for music led her to the Radford University Singers and eventually Carnegie Hall.

“I’ve been in choir since middle school, and they would mention Carnegie Hall, but it was this faraway magical place,” Cahoon said. “Then, I decided my majors, and I said, ‘probably won’t happen now, but it’s such a beautiful place and would be amazing,’ and now we're doing it. My mind is constantly, ‘oh my goodness.’”

She absorbed every moment, bonding with her Highlander choir sisters as they walked through New York City, saw Broadway musicals and saw the historic building for the first time where they performed.

The magnitude of the experience did not set in until she was on the bus traveling back to Radford University. She admits the bright lights and tall buildings were overwhelming, but they inspired her to find confidence and courage to finish her semester strong and begin the next chapter as a Radford University graduate.

“It’s a little bittersweet for me,” Cahoon said. “I’m about to graduate, and I’ve made all these friends. It’s like one big celebration in New York before I go to grad school.”

She loves learning and stepping outside her comfort zone, and Radford University helped her have new and tangible experiences.

“It makes me very proud to be a Highlander and to be able to show Radford and show the people that this is what Radford can do for people. It can provide them with amazing opportunities, like performing at Carnegie Hall.”

The glow of the lights from the stage at Carnegie Hall still shines in the eyes of Y’Vonne Thomas, now a junior at Radford University. The soft-spoken music therapy major was blown away by the appearance of the massive concert hall, down to the cushioned seats and the unforgettable sound.

“We sounded amazing. I thought we sounded great. The acoustics in there were amazing. Vibrato, and then when you stopped singing, you could hear it bounce back to you. It was breathtaking,” Thomas said.

Photos of past notable performers lined the halls and screens on the walk from a backstage entrance to centerstage. The magnitude of the experience settled in during that walk with the group.

“I saw an animated slideshow, and I was watching it and was like, how did I make it here?” Thomas said.

The answer is simple: perseverance, grit and curiosity, all things Radford University and her director, Meredith Bowen, entrusted within her to reach this moment. This experience was unforgettable for her. It left her speechless as she tried to grasp the enormity of performing on one of the most well-known stages in the world.

“I could not have asked for a better choir to come to Carnegie Hall and perform with,” Thomas said. “For some people, this is like a dream come true for them. Being a Highlander pushes you to do your best, so you can achieve these things.