The Time of Their Lives

A chance encounter develops into a lifetime of Highlander love.

The encounter was random, but the connection made outside the Bonnie Hurlburt Student Center between two students from Zimbabwe was life-changing. Brian Gwanzura ’12, MBA ’14 was leaving the building, heading to his residential hall, when he heard footsteps behind him. 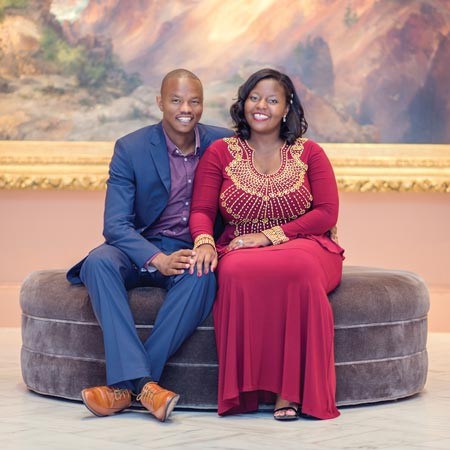 Video feature: watch and learn more about how Brian and Nicole met and their love for Radford University.

“Sprint after me,” Brian said, with a laugh, each of them taking turns to fill in details of their first meeting.

“I walked really quickly to catch up to him, because I heard there was another Zimbabwean on campus,” Nicole said. A huge smile across her face and excitement in her voice as if the encounter had just happened.

At the time, Brian didn’t have any other friends except those on the Radford University men’s soccer team. Walking to his residential hall was usually a quiet, non-eventful experience. This time was memorable.

“I turn around, and I see somebody come full speed,” Brian said. “She’s running towards me, and after that she introduces herself.”

“The rest is history,” Nicole said.

This moment was significant: not only were Brian and Nicole meeting for the first time as freshmen, but they were also finding a piece of home in each other from a world away.

Both of them were born and raised in Zimbabwe. At the time, the two of them were the only students on campus with roots there.

Brian was still learning American culture, because prior to accepting an athletic scholarship, he had never left his home country. Radford was his introduction to the United States.

He is a soccer fanatic, and it is obvious even in a short conversation with him. He started kicking a ball and playing the sport shortly after he learned to walk, but boots, equipment and a nice field were considered luxuries.
Growing up, Brian and his friends played soccer barefoot on makeshift dirt fields and sometimes, when the rare opportunity was available, he would share shoes with friends for better traction, while playing.

In the spring of 2010, he started Boots 4 Brian on campus, an opportunity for fellow soccer players to donate used cleats for people in his home country. The turnout was overwhelming for him.

“The response was just so surprising. The awareness was promoted by the school, by the Athletic Department, by my coaches and my teammates, and it was a good thing,” Brian said.

That love and support from his teammates continued months later when his father died in Zimbabwe. Members from the Athletic Department helped him get home. That family atmosphere on campus carried him through his remaining time on the field, as faculty, staff and administrators cared for Brian as if he were their own. They checked in on him and made sure he was keeping good grades in classes. His teammates became brothers by teaching him how to use a computer when he first arrived and giving him clothes. The interactions and connections made falling in love with Radford so much easier and gave him a sense of home.

“When I look back at it, great experiences upon great experiences. You meet people from different backgrounds — Venezuela, El Salvador, Brazil and England — it’s just a great thing to happen,” Brian said. “Radford was the introduction of my life in the United States. It gave me the friends, the closest family that I have here.”

Supporting him along the way was Nicole, who had an earlier introduction to the United States and Radford University.

She moved with her parents from Zimbabwe in 2004 to Northern Virginia and in middle school started looking at colleges. Through the College Partnership Program that celebrates diversity, she was able to take bus trips to universities to help her set goals and dream of her future. It was a visit in eighth grade to Radford University, where she experienced college through classes and food options on campus, that something clicked —

Radford University was the choice for her.

Nicole was admitted in her senior year to Radford during early admission. She immediately turned down offers from other universities and stopped filling out applications. Her dream college was awaiting her arrival.

She joined a Facebook group, Becoming Radford Students, and started chatting with another female incoming student about their connections to Northern Virginia. They shared experiences visiting campus. Nicole had already fallen in love with the facilities and was using her instinctive marketing skills to help sell the University to incoming students. The chat turned into a lasting friendship, and now Brian and Nicole are the godparents of her children.

Through their college experience, Nicole and Brian’s friendship grew and developed a strong foundation. Many of the friends they both made, while students at Radford University, have remained close.

“You just do not find that anywhere else, it’s just not there. There are so many other things that any other schools could have offered, but it would not have been the same community,” Nicole said. She made close friends being a part of Diversity Awareness Programming, Delta Sigma Pi and Quest, and becoming homecoming queen.

“All of our best friends are from Radford. The soccer coaches have left and work at other schools, but we still stay in touch,” Brian said.

The two of them studied together on campus, talked for hours on end, shared meals and encouraged one another academically and professionally. They still continue these habits more than 10 years after they first met.

“Here it is, 2020, and we’re still talking about Radford,” Nicole said. “I just got appointed to be a member on the Alumni Association Board of Directors. That’s something I would have never imagined in my wildest dreams. You think about that investment, and people still remember you or think of you all these years later.”

That one impulsive meeting outside the Bonnie was the beginning of a shared lifetime of Highlander memories. Brian and Nicole married in 2016 and now have a two-year-old daughter, who already has Radford University clothing and Highlander love running through her veins.

“Radford gave me the opportunity to be here in the United States, and it allowed me to meet my wife and get my education. It means so much to me,” Brian said. “I have a job, a wife and a kid. Radford shaped my whole life.