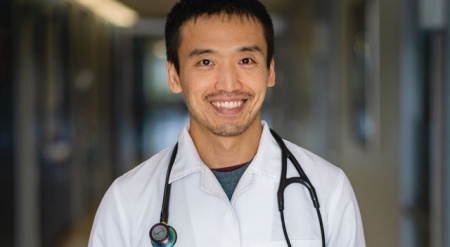 MHFA is a public health education program that began in Australia in 2001. During the training, participants learn to recognize early warning signs, risk factors and symptoms of common mental and substance use disorders. They can then connect the person in distress to the professional, peer and self-help support and/or treatment they need.

“It can be difficult to find the time for it. I spend 70-plus hours each week learning to practice medicine,” Lee said. “But, I truly believe in the value and impact of MHFA, and I consider it a privilege to share information and resources with others, who may not have access otherwise.” Lee completed his training in Adult MHFA in 2010 in his native Australia.

By offering MHFA education, Lee is helping RUC foster relationships and a culture of service both on campus and in the Roanoke community. This innovative approach to supporting others through service provides participants the opportunity to embrace the diverse needs of families, friends and neighbors across the region.

I consider it a unique privilege to share information and resources with others who may not have access otherwise."

“Participating in that training ultimately inspired me to become a trained counselor,” Lee said. “I became a certified Adult MHFA instructor in 2018, as one of the PA Foundation’s inaugural Mental Health Outreach Fellows, and have since been hosting training sessions in the Roanoke Valley. Being an MHFA instructor is particularly meaningful for me, because I also happen to be the only PA student in the country who is a certified MHFA instructor.”

Over the last year and a half, Lee has trained 350 community members in the Roanoke Valley. Sessions included training with RUC students, faculty and staff, as well as agencies like the Roanoke City Health Department, Goodwill Industries of the Valleys and Virginia CARES. In September, he led sessions again on the RUC campus in recognition of Suicide Prevention Awareness Month.

“I host MHFA training sessions in my own time, and I think of it as a hobby,” Lee said. “Some might consider it unusual, but it’s something that I’m truly passionate about.”

A lot goes on behind the scenes to plan and host the training sessions. Lee dedicates time to those duties during his weekends, school breaks and after-class hours. 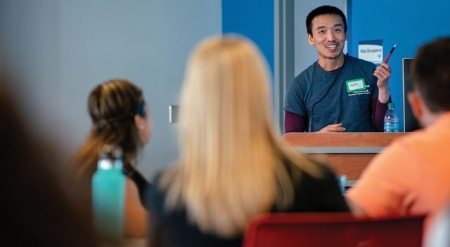 Lee followed an unusual educational path to Southwest Virginia after moving to the United States six years ago.

“My educational path has been unconventional, because I’m a middle school dropout. I earned my middle and high school diplomas at 16 through self-study, while working full-time to support family. Then, I earned my bachelor’s degree in sports and health sciences in 2017 from American Public University.”

Lee and his partner moved to Northern Virginia in 2015 before deciding to relocate.

In addition to his PA classes and MHFA training duties, Lee also volunteers with Crisis Text Line as a crisis counselor and is an active member with the Suicide Prevention Council of the Roanoke Valley.

As for his PA studies at RUC, Lee says he has really enjoyed his first year in the program.

“Many of the tools I teach in MHFA training, such as empathy and active listening, have universal utility. They’re certainly essential during every counseling shift I serve, but they also come in handy no matter where I am,” Lee said.