A Bond Built to Last 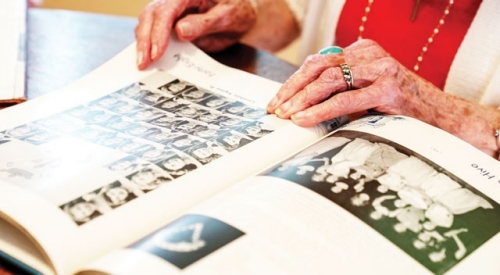 Exercise class at Dunwoody Baptist Church in Atlanta, Georgia, was exactly what Wilma Paris ’48 needed. The 92-year-old has a passion for staying active, and the exercise routines challenged her to keep moving. The class was filled with people with a similar dedication to fitness, but were mostly acquaintances to Paris.

In her same fitness class, counting the same reps only a few feet away, was another woman looking to stay active at 95 years old. Jean Bliss ’42 chose the same exercise program at the church. Neither woman knew they had a connection much deeper than health. They both attended Radford University more than 70 years prior and nearly 400 miles away.

“It was interesting, although I had never spoken to her or known anything about her. After that, we got to be buddies,” Bliss said.

Both Paris and Bliss finally made the connection three years ago at an alumni gathering. The two found common ground in sharing stories of a bygone campus life. Their faces both gleam when they recall memories from the 1940s. Paris remembers the tradition of serenading then Radford College President David Peters, Ph.D., at 4 a.m. at his house on campus around winter holiday break.

“And, he’d always come raise the window up and talk to us,” Paris said with a smile on her face thinking of that special festive, but cold, moment.

The two women recall being required to wear a dress, not pants, on campus and were only permitted to walk on sidewalks, as walking on the grass was strongly discouraged.

Bliss flashes back to times of interacting with Dean M’Ledge Moffett, Ph.D., who she says, “caught you doing everything wrong.” She shared a story of students climbing out of a window to sunbathe on the roof of a campus building and getting scolded by Moffett. But, Bliss insists she is not the voice of experience.

The two met at Bliss’ home during the summer, along with their friend Cynthia Lyon ’69, to rekindle Radford College moments. Lyon, 72, also met her Atlanta alumnae friends Paris and Bliss by chance.

Lyon moved to Atlanta from Tennessee after her husband received his master’s degree about four decades ago. She walked her neighborhood streets, often with her dogs. In the mid-1990s, her dogs led her to a new friend living nearby.

“My neighbor’s dog used to follow me up the hill. She had two white poodles. They were always wrapped around her legs, because they were trying to get away from that black dog. And, we got to be buddies,” Bliss said.

Lyon and Bliss started talking and became fast friends after finding out they were both from Virginia. Then, they discovered they too went to the same institution. Bliss introduced Lyon to Paris, and suddenly, the three strangers found out they were part of the same Highlander family all along.

Family is why they found Radford University, at that time still Radford College. 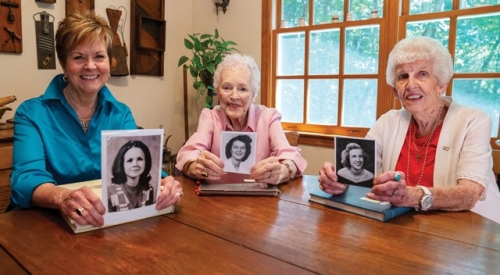 Then and now: Cynthia Lyon ’69, Jean Bliss ’42 and Wilma Paris ’48 display their class pictures and reflect on their Radford experiences.

Bliss shared that her parents, Marion and John, were the first married couple to graduate from the institution together. She says they both taught during the academic year and worked on their college degrees together in the summer. This was half a century before Radford became co-ed, but during the summer months, men were allowed to take classes. She remembers their Commencement well. Radford’s first President, John McConnell, Ph.D., called her parents to come forward together on stage and recognized them for their commitment to raising three daughters and furthering their education.

“I remember he was a super nice guy,” Bliss recalls. “He waited for the two of them to be together, so that he could introduce the three little children that had sent them to school.”

Paris grew up in Radford and, like her two friends, wanted to become a teacher. She even has a picture of herself when she was six years old, pretending to teach. Her family followed her father to Radford when he was transferred to build one of the area’s first subdivisions. Like a lot of girls she went to high school with, she chose Radford College, because of its affordability and proximity to her home. She did not have a car and did not live on campus, but instead was considered a day student.
She remembers walking the hills to class and loved
the experience.

“Radford prepared me for the future,” Paris said. “I’m proud to tell people I graduated from Radford.”

Lyon chose Radford College, because it gave her the independence she wanted. It was six hours from her home and had an excellent reputation, she recalls.

“My education really catapulted my entire life,” Lyon said. “I think it’s a magnificent University to get a really good quality education.”

Because of that experience, Lyon and her family now pay it forward. She and her husband established the Pollard/Lyon Scholarship for Teachers to support deserving students studying to become teachers.

“It’s important that we leave a legacy for other young people to be able to continue their career and to know that there were people before them that care,” Lyon said.

Decades after graduation, her friends Bliss and Paris agree it is important to stay engaged, attend alumni events and share an affinity for their alma mater.

“It’s just good to know you’ve got Radford sisters,” Lyon said of her Highlander family as their visit ended. Their friendship proves Radford University connections have no boundaries.

WATCH MORE AND BE INSPIRED BY THE BOND THESE THREE SHARE